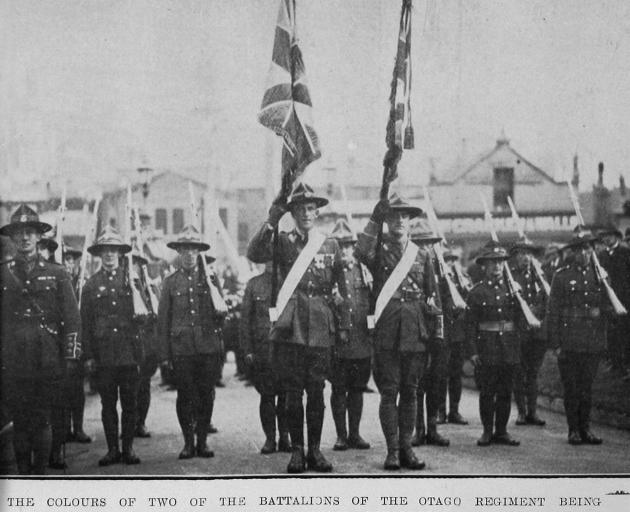 The colours of two of the battalions of the Otago Regiment are conveyed under escort to First Church on June 5, 1920. — Otago Witness, 15.6.1920. COPIES OF PICTURE AVAILABLE FROM ODT FRONT OFFICE, LOWER STUART ST, OR WWW.OTAGOIMAGES.CO.NZ
One of the saddest aspects of the aftermath of war consists in the evidence which surrounds us of the dreary struggle of many returned soldiers to regain physical health and well-being. Unfortunately a considerable proportion of these men are sufferers from tubercular disease, the prospects of whose recovery may be uncertain, while the process of their rehabilitation must in any case be more or less prolonged. Even if the number of these tubercular cases be not very considerable they constitute a serious problem with which it is the duty of the government to deal as efficiently and withal as sympathetically as possible. Mr Massey (the Prime Minister) has given the Returned Soldiers Association assurance of the intention of the Government to do its duty in this matter of returned soldiers affected by tubercular disease and we hope that the existence of admitted difficulties in the handling of these cases will serve only as a stimulus to departmental activity to find a means to achieve success in their treatment.

A ceremony absolutely unique in the history of Dunedin was performed yesterday afternoon when the colours of two of the Otago battalions presented by his Majesty the King in recognition of conspicuous services on the battlefields of France were consecrated and deposited in First Church. A number of ex officers of the Otago Regiment NZEF and a very large number of townspeople gathered in the church to witness the arrival of the soldiers with the colours, and to take part in the service. Lieutenant-colonel A.B Charters, CMG, DSO, handed the colours of the 1st Battalion of the Otago Regiment to the Rev. Graham Balfour, minister of First Church, in memory of the men who had fallen and for safekeeping until such time as they might be required; and Lieutenant-colonel D. Colquhoun, DSO, handed over the colours of the Third Battalion for the same purpose. Mr Balfour accepted them on these conditions and placed them in positions where they could be seen by the whole congregation.

London: Writing in The Sporting Life of the International Rugby Football Board, Mr John Hughes says that followers of rugby will probably be surprised to know that, despite its high-sounding title, the board is international only in name. None of the dominion unions are represented on it, nor is France, though the board has been in existence for 30 years. It is a British board and not an international one, England, Scotland, Wales and Ireland alone being represented. The policy of isolation is all of a piece with the history of the parent body and is (in Mr Hughes’s opinion) obviously prejudicial to the interests of the only game of football that is played all over the world — “a real empire game if ever there was one. The sooner New Zealand, Australia, South Africa and France are represented on the board the better.” While Mr Hughes is far from suggesting that the international board as now constituted would raise any objection to the representative scope of the board being widened in the direction indicated, he thinks it is nearly time that the rugby union authorities in this country came forward with some such suggestions and did not leave it to be made by outsiders.

There are the Colours.

On the battlefield, the Otago/ Southlands fought alongside the Canterburys.