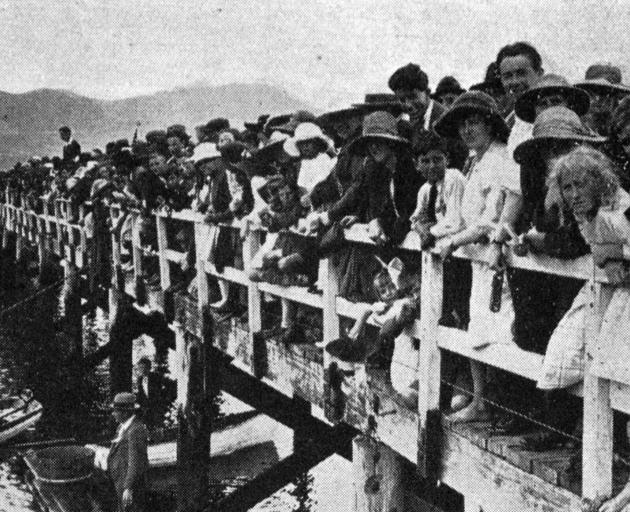 Spectators crowd the jetty during the Broad Bay Regatta on January 2, 1922. — Otago Witness, 10.1.1922
The regatta held annually at Broad Bay came off yesterday under fairly favourable conditions, except that the wind was at first too light for the yachts, and the length of the races had to be curtailed in consequence.

Excellent arrangements had been made by those responsible for the management of the regatta, with the result that there was not a hitch throughout the day.

The greatest interest was taken in the restricted class for fourteen-footers of the Jellicoe class.

The Heather, which won in Auckland against Lord Jellicoe's yacht, was victorious yesterday after conceding handicaps to all other competitors.

The Winifred might have reversed positions with the Heather but for sailing too close to the wind at one point during the second round.

The handicapping was very good. During the afternoon a fine display of aqua-planing was given by P. McKewen, which was all the more creditable in that it was the first time he had attempted the feat.

The little township presented quite a gay appearance, many of the residences being decorated with bunting.

Mr John Ross, of Dunedin, has been made a Knight Bachelor in the New Year Honours.

Sir John, who was born in Caithness, Scotland, and began his career in mercantile firms in that country, came to Dunedin in 1861.

He brought with him some £3000 worth of goods on the barque Velore and became a member of the firm of Begg, Christie and Co, general drapers.

After a year, he bought out the other partners and began a new partnership with Mr Robert Glendining.

Business
prospered, and after six years they sold their retail business to Messrs Brown, Ewing and Company, setting up a wholesale business in Stafford St. To keep in touch with world markets, Sir John went to England in 1870.

He married Miss Margaret Cassels and they lived in London for 35 years.

Meanwhile, in 1879, the firm under his partner in Dunedin, Mr Glendining, began manufacturing. They started with hosiery and soon moved also to woollen and worsted goods.

The Roslyn Woollen Mills were erected in Kaikorai Valley, where they now have two large mills employing 600 hands.

In 1900, the firm was formed into a limited liability company.

Mr Glendining died in 1917 and the company was recast, with its capital at $1.25 million.

As a result of its wonderfully successful enterprise, the company now gives employment to over 1500 people.

His donations to local causes have been numerous and generous, including £20,000 to Knox College and £5,000 to the establishment of Ross Home.