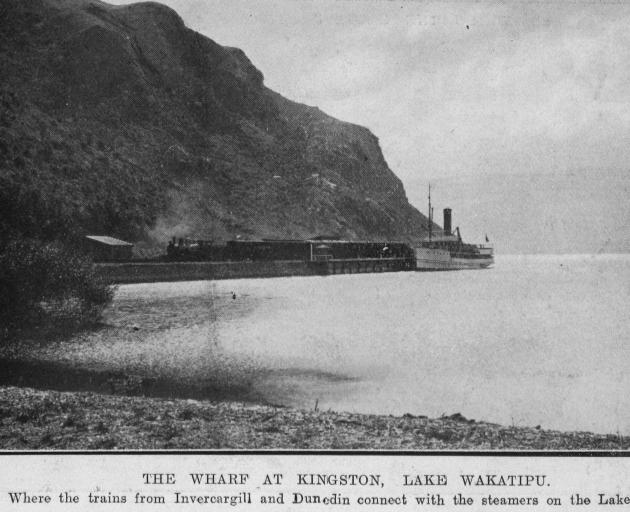 The wharf at Kingston, Lake Wakatipu, where the trains from Invercargill and Dunedin connect with the steamers on the lake. — Otago Witness, 29.6.1920. COPIES OF PICTURE AVAILABLE FROM ODT FRONT OFFICE, LOWER STUART ST, OR WWW.OTAGOIMAGES.CO.NZ
A considerable extension of the sawmilling industry seems likely in the near future and already projects are in hand for opening eight or nine new mills on the West Coast, mostly in South Westland. A company in process of formation in Christchurch, which has rights over 6000 acres around and near Okarito and 4000 acres at Little Wanganui proposes to erect three sawmills. The shortage of timber in Christchurch is still very acute. The steamer Kakapo brought 770,000 ft to Lyttelton two weeks ago, but owing to the shortage of trucks, much of this has yet to be unloaded. A great quantity of timber is not going into the yards of distributors, but is being sent direct to users.

London: Serious rioting, lasting all night, occurred at Londonderry. Unionists and ex-soldiers engaged in a battle with stones with Sinn Fein. Many women participated on both sides. There was indiscriminate rifle and revolver shooting and several casualties occurred. The police were powerless to interfere. The situation had improved at midnight on the arrival of troops. The Unionists guarded Carlisle Bridge, thus preventing numbers of Sinn Feiners from returning to their homes. Sinn Feiners attempting to cross the river in boats were driven back by rifle bullets and were compelled to billet themselves with friends. The government informed the British and Irish railway men's deputation that it will take drastic action in the event of further refusals to convey troops and munitions. The strikers will be summarily dismissed, and if a general railway strike occurs, the government will run the trains it requires with the military and shut down the remainder.

The scheme to beautify the foreshore of Picton is by no means moribund. Since the borough council decided not to pay £150 for comprehensive plans of the proposed work made by a skilled landscape planner, a number of townsman have offered to buy the plans and present them too. The plans are said to include the whole sweep of the headwaters of the bay, from the wharf to the end of the promenade on Victoria Domain. Several tennis courts and other playing greens, a handsome pergola, hot water baths, a band rotunda and shrubberies and paths will be features of the scheme. When completed, this much needed beautifying of Picton’s foreshore should harmonise with the natural beauty of the port and make it one of New Zealand's most desirable tourist resorts.

A Press Association message from Wellington states that the Council of Education has made recommendations to the University Senate for various improvements in the matriculation examinations, including one that examination papers should be revised to make sure that impossible problems are not set and that printing errors are corrected. It was stated that grave mistakes had been made at times. One arithmetic paper had contained two problems that could not be solved; a Latin paper was misprinted, and a geography examination was so framed that only candidates with a good knowledge of South America could pass, even though they might have a sound knowledge of Europe and other countries.

100 years ago Eskimo Pie was born. Now, "The owner of Eskimo Pie is changing its name and marketing of the nearly century-old chocolate-covered ice-cream bar, the latest brand to reckon with racially charged logos and marketing."

It is Logos, the Word.

There are no 'Eskimos'. There are Inuit.