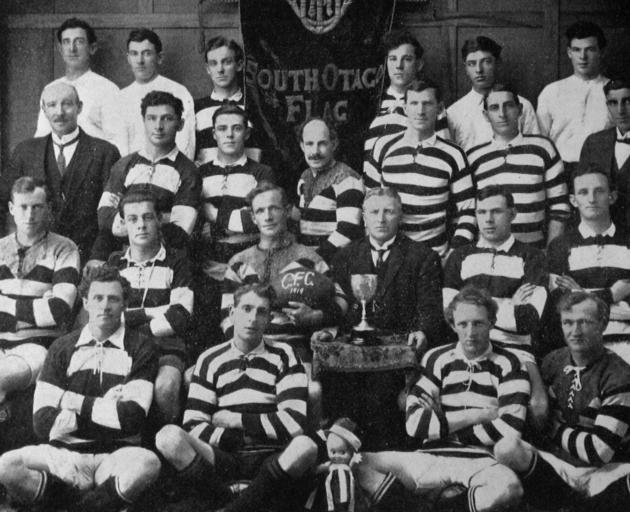 The Crescent (Kaitangata) rugby football team which won the South Otago flag and championship cup for 1919. - Otago Witness, 28.10.1919.
The general resumption of work at the Wellington wharves yesterday puts an end to the apprehension excited by the events of the preceding two days lest a serious industrial situation was to be precipitated.

The action which the waterside workers had taken in refusing to unload steamers bringing coal to the dominion was fraught with grave possibilities.

The development of trouble on an extended scale was threatened if the waterside workers adhered to their recalcitrant, unjustifiable, and, from the standpoint of the general public, wholly objectionable attitude.

Presumably their decision to return to work after their ''demonstration'' in support of the coal miners and the ''go-slow'' strike was founded upon a realisation of the fact that they had been over-precipitate.

They can scarcely have been blind, also, to the fact that the weight of public opinion was dead against them. In refusing to unload imported coal, of which the country is in great need, they aimed a blow, as they were perfectly well aware, against the community.

The mutton birds have started on their migratory tour; and during this week (says a Puketeraki correspondent) million have been seen flying low down going northwards.

A peculiar incident in connection with the flight is that the birds started a shoal of very small fish, which made for the beach, and were heaped up in piles in as countless numbers as the mutton birds themselves.

The farmers looked upon these small fish as a prize, as they took them away in cartloads and spread them over their land to enrich it.

Our correspondent says these small fish would have brought 1 a barrel or more if sent in to Dunedin. He thinks also that the presence of these small fish accounts for the smallness of the ''catch'' lately, as they have provided feed for the larger fish, who have had no need to take on ''hooked'' sustenance.

Speaking on the Mining Bill in the Legislative Council last night the Hon. D. T. Fleming expressed the view that so far as Otago Central was concerned the purpose for which water rights were originally granted had disappeared, and that the time was ripe for the reconsideration of the whole question of water rights where these rights had lapsed or the conditions had not been complied with, so that the needs of the whole of the settlers interested in the matter might be considered.

The water was in many cases more required now for irrigation than for mining, and in any case it would be a huge mistake to give a monopoly of the water available to any persons because they happened to be favoured by a set of fortuitous circumstances.

The whole question should be held up for mature consideration as to what was in the best interests of the district as a whole.

Petone was excited on Sunday by the appearance of a small bottle-nosed whale near the wharf. Several shots from a rifle wounded the cetacean, and then it was secured by boatmen and hauled ashore.

The carcase bears scars, apparently the result of adventures with whalers' harpoons.