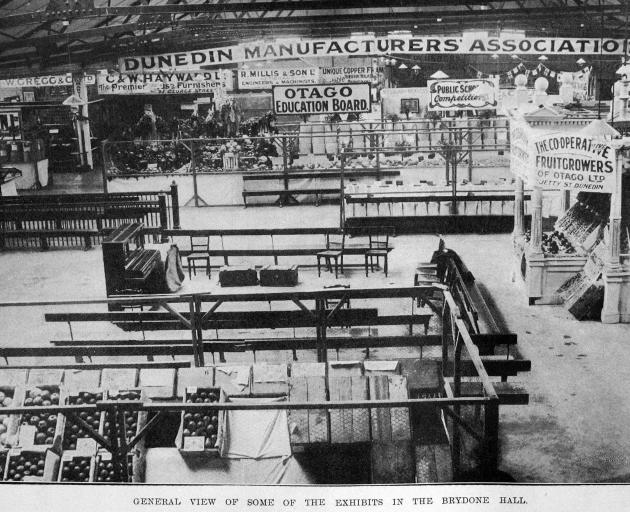 Exhibits in the Brydone Hall for the Otago A and P Society’s winter show. — Otago Witness, 7.6.1921.
The Brydone Hall presented a busy scene on Saturday.

Down on the basement many firms were erecting their machinery exhibits, while up above the cheese had been staged and was being judged by the Government experts.

Preparations were in progress for displays of all kinds, and in the annexe many hands were at work setting up the Government exhibit, which promises to be an unusually fine one.

The judging of the cheese will be completed today, and this morning the case fruit will also be judged by a Government expert.

Plate fruit must be in position tonight, ready for judging to-morrow morning.

Some 174 varieties of wheat, in the ear and on the grain, were being shown, and 18 varieties of barley, grown principally at the experimental farm at Ashburton.

Poultry and poultry methods, with models of houses, brooders, feeding racks, trap nests, etc., should be of great value to many people, and in addition one of the best layers at the Milton farm (267 eggs last season) would be exhibited, with weights and specimens of the food consumed to attain that end.

Diggers’ gift to HMS Chatham The soldier patients from the Dunedin Hospital and convalescent homes who were entertained by the ship’s company on Tuesday last were so delighted with the kindness shown them that they decided to make a small gift to the sailors.

A committee of the men, with this object in view, boarded the ship on Saturday morning, and presented an address to the commander, officers, and men of the ship.

The gift took the form of a prepared sheepskin, artistically decorated, and on which were the following words: ‘‘To the Commander, Officers, and of HMS Chatham.

The ‘Digger’ patients at Dunedin desire to express their sincerest thanks for the great kindness you extended to them on the occasion of their visit to your ship on May 24, Empire Day, 1921.

The warmth of your welcome and the right royal way in which we were treated marks the day as one of the happiest we have spent.

May your future abound with blessings. Kia ora. Haere ra.’’

To the editor: In our departure from Dunedin we desire to express our very sincere thanks for the great kindness that has been extended to us by all classes during our stay in your city.

The cordial welcome we have received has greatly furthered the high purposes of the pastoral visit, and has been of especial value in our endeavours on behalf of the Jewish war memorial.

A very generous response has been made to the appeal for the war memorial fund, and a local committee — consisting of Mr D. F. Theomin (president), Mr E. I. Halsted (treasurer), and Mr D. Phillips (hon. secretary), with power to co-opt — has been formed, who have kindly undertaken to continue the work so as to enable every Jew and Jewess in Dunedin to be associated with the movement that is destined to lead to such fruitful results for the whole of Jewry throughout the British Empire.

Thanking you, Sir, for the extreme courtesy you have extended to us during our visit, — We are, etc, J.H. Hertz, Chief Rabbi, Albert M. Woolf, member of the executive council, Jewish War Memorial, A.H. Valentine, secretary for dominions visit, Dunedin, May 27. 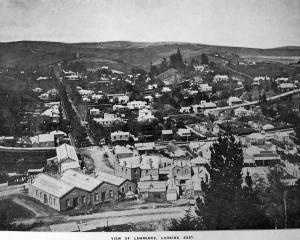