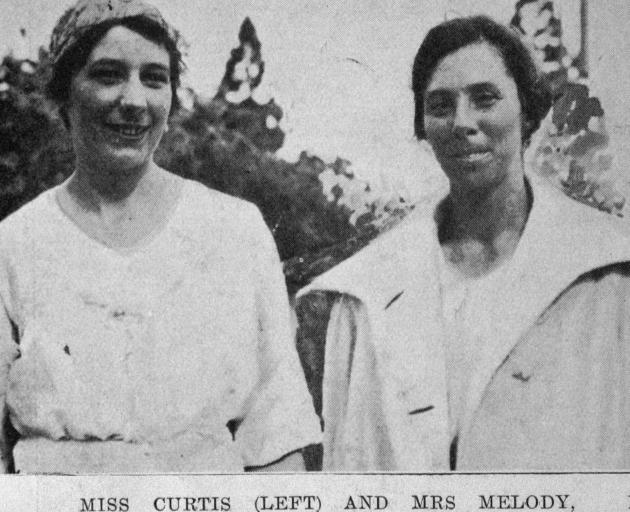 Mrs W.J. Melody and Miss N.E. Curtis, of Wellington, met Mrs C.J. Marshall and Miss Marjorie MacFarlane, of Auckland, in the final of the ladies’ doubles championship, and were returned winners after a most interesting contest, 6—2, 4—6, 6—2.

The match was very largely an encounter between Mrs Melody on one side and the other two ladies on the other. Miss Curtis was very skilfully avoided  by her opponents, who adopted what was really their most effective plan — that of pounding the weaker player.

During many prolonged rallies, Miss Curtis was nothing but an interested spectator enjoying a particularly fine position to watch the play, but the ball never got near her.

Mrs Melody, her partner, on whom fell the bulk of the work, was surprisingly steady and accurate.

Mrs Melody’s steadiness, coupled with Miss Curtis’s brilliance, when she had the chance of working the ball, carried that side to victory, although in the second set the two Auckland ladles more than held their own largely by reason of Mrs Marshall’s splendid shots at the net and Miss MacFarlane’s agility in reaching well-placed balls and returning them effectively.

During 1921 New Zealand has necessarily encountered the financial storms which have had the world as a hunting ground, but the experience of the dominion has certainly been more favourable than that of most countries.

Labour troubles, chiefly owing to the adoption of the stabilised wage decision of the Arbitration Court, have been neither serious nor numerous. Certainly the unemployed difficulty has been more acute than for many years, but, contrasted with its intensity in other countries, it has been of small volume.

The fall in the value of important primary products is a much more grave matter for the dominion than any other single circumstance, and this has prejudicially affected internal prosperity and the national finances. Prices, however, generally have declined and the cost of living is not the serious problem of a year ago.

In the sphere of politics Mr Massey reigns supreme, and the by-elections of the year have further strengthened his position.

The House of Representatives is today composed of a larger number of diversified political groups than at any previous period in our history. A new political party bearing the impressive name of Moderate Labour and National Progressive has been launched, but it has so far failed to generate any measure of popular enthusiasm.

The Liberal Party has undergone further vicissitudes and is weaker than at any time in the past thirty years.  — ODT, 31.12.1921.