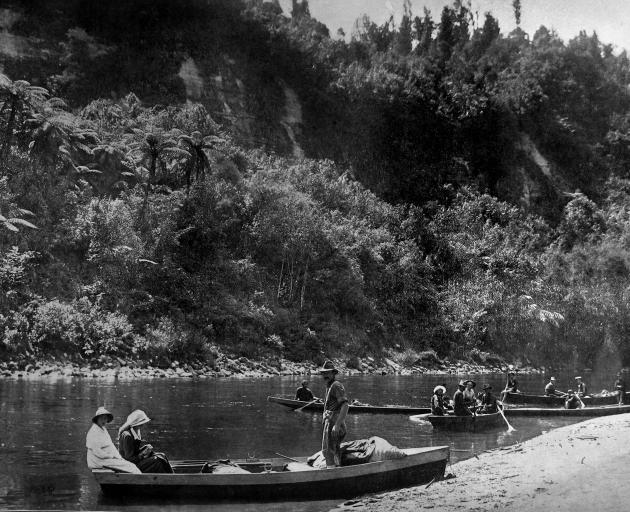 Members of a party boating down the Wanganui River from Taumarunui to Wanganui. - Otago Witness, 4.11.1919.
The first annual meeting of the Women Citizens' Association was held in the Assembly room of the Y.M.C.A. last night.

The annual report outlined the origin of the association in August, 1918, for the purpose of uniting women to stimulate their interest in civic life and to foster a sense of women's responsibilities with regard to their use of the vote. The year's proceedings commenced with an inquiry into municipal affairs and with the endeavour to secure a nominee who would stand as a candidate for the City Council which did not meet with success. Several interesting addresses were given during the year, and some brisk discussions took place. An outline of the activities of the association made reference to a deputation to the Minister of Justice in connection with the Epidemic Orphans' Adoption Act, to the matter of women patrols, to a deputation about collection of garbage, and a movement for the amendment of the Shops and Offices Act.

At the monthly general meeting of the Dunedin Returned Soldiers' Association the committee reported that during the month the membership had been increased by the admission of 421 returned soldiers and seven nurses. Eight honorary members had been admitted. Mr. Geo. M. Smith had been permanently appointed secretary. A member who had mutilated his badge by cutting the crown off it, and who was wearing the badge in that condition, had been expelled from the association. The matter of proceeding against him for destruction of the association's property was in the hands of the association's solicitor. The case of a man who was hawking goods in the city and representing himself as a returned soldier was brought before the notice of the O.C. District, who reported that the man had been cautioned. Matters in connection with the clubhouse appeared to be making headway, and there was every prospect that the erection of the building would be commenced in the near future. It was regretted that the official paper of the New Zealand Returned Soldiers' Association, Quick March, was not receiving the support of new members. Representations had been made to the Minister of Defence requesting that the pay of the specially-trained men at the Woodside Jaw Hospital be increased, in order that their services might not be lost. In connection with the new organisation scheme, sub-associations had been formed at Alexandra, Cromwell, Kaitangata, Palmerston, Tapanui, and Waikouaiti.

The home to be erected at Anderson's Bay to accommodate boys placed in charge of the probation officer in the district consists of 10 or 12 rooms, which are fitted with all modern conveniences. It is now occupied by Mr John Smith, but will be vacated at the end of the present month. The boys sent there would be those placed in charge of Mr W. Fullerton (Government Probation Officer), and Messrs Axelsen and Cumming. Hitherto this class of boys have been placed privately, but they will in future be accommodated in this home, provided, of course, that this plan is carried out despite the objections raised by the residents of Anderson's Bay, who take the view that this class of boys should not be accommodated in congested districts.