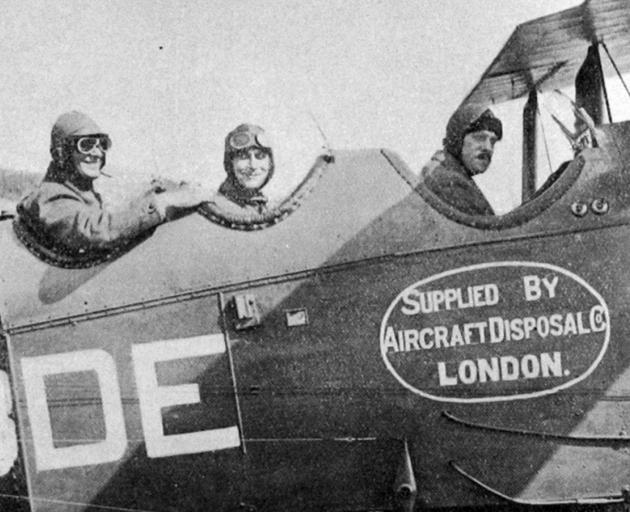 Rome, June 25: Major Blake has arrived here on his round-the-world flight. Major Blake arrived at Naples safely. He covered the distance from Marseilles in 13 hours. He will fly to Athens tomorrow.

Major Blake informed the Morning Post in April that it was his intention to proceed via France, Italy, Greece, Egypt, and Mesopotamia to India. "Thence, instead of  following the route of Ross Smith’s contemplated expedition, we shall travel along the coast of Burma to Rangoon, afterwards to Saigon, and along the coast of  French Indo-China and of Japan to Hong Kong. Crossing to Japan, the route runs from Tokio along the Siberian coast, then by way of the Aleutian Islands to Alaska, across Canada and the United States, to New York.

Newfoundland will be the next stopping place, and it has been planned to make the Atlantic crossings via Greenland, Iceland, and Scotland. Our reasons for choosing this route are that by it the longest sea passage is only 850 miles, while the weather conditions should be favourable to the flight at that time of the year. If  all goes well we shall arrive back in England in August or early in September."

Auckland, June 26: A telegram from Taupo on Sunday states that after a lull of comparative quietness, Taupo, Wairakei and Oruanui were severely shaken by  earthquakes. During last night and this morning the shocks surpassed in violence those of the previous Sunday night, and were quite the worst experienced since the earthquakes began nearly seven weeks ago. Between 12:30 and 1:30 this morning there were no fewer than 20 or 30 very severe shakes, besides many minor ones,  the rate being about one a minute. At times houses rocked about like boats and some glassware fell from shelves and was broken. After 1:30 the earthquakes  gradually slackened off. Shortly after 9 o’clock, when the people were thinking they were going to have a quiet day, the most severe earthquakes of the whole period occurred. The first was at 9:10am, the second at 9:13. The first lasted about half a minute, the second a minute. They shook the building so violently that lamps  suspended from the ceiling swung, and various loose articles tumbled from the shelves. After these two shocks the earthquakes decreased in number and severity  and up to 11pm only small ones occurred.

At the annual meeting of the Otago Acclimatisation Society, the chairman, Mr G.W. McIntosh, said the principal question the council had been faced with was the  large increase in the deer herds. Deer had increased in such numbers that they were destroying the forests and the undergrowth, and the department would  probably take steps to cull deer so as to reduce the numbers. The quinnat salmon had been established in Otago waters and there had been a big run up the  Molyneux river as far as Wanaka. Hedgehogs had been introduced into various parts of the country, and it was as well to mention that these were dangerous to young ducks, chickens, and destructive of eggs. The idea in introducing had been to get rid of blight and insect life, but it had been proved that they had a wider diet.  It would be a good thing to keep the hedgehog out where there was game.