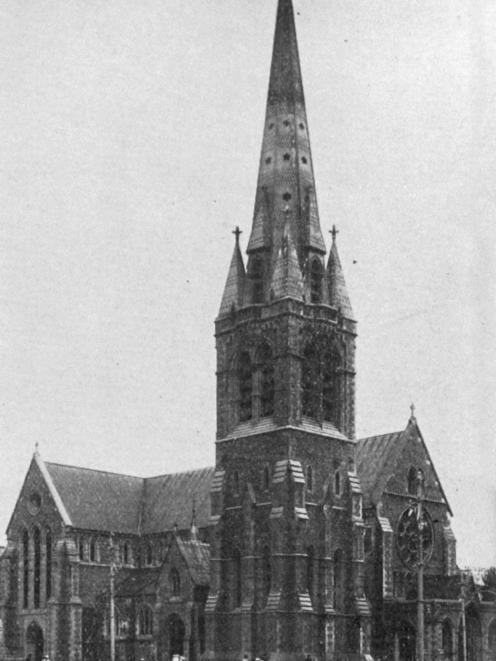 The Anglican cathedral, Christchurch. — Otago Witness, 6.7.1920
A very remarkable and most significant offer from Yale University was considered at the general meeting of the Otago Institute held at the Museum last night.

The matter was introduced by the secretary, Professor W.N. Benson, who said that Yale University had offered to give or lend this country a large series of very valuable astronomical instruments for the carrying on of solar physics and high-class astronomical work in general, provided that a good house was built for them and the upkeep and general establishment provided. This of expense. It was estimated that £7000 capital expenditure would be required to start with, and that thereafter there would be an expenditure of £3000 for its annual upkeep.

The council of the Institute thought it was an extremely great loss to New Zealand if this chance was let slip. Mr G. Stuart Thomson said that the committee appointed by the government to consider the question recommended not only the establishment of this observatory in Otago Central, but also the transfer of the Hector Observatory from Wellington and of the Magnetic Observatory in Christchurch, which is now being seriously interfered with by the number of electric
wires in the neighbourhood. The government had turned the offer down in the meantime, but it had not definitely refused it. A committee was appointed to endeavour to secure the acceptance of the offer.

The annual report of the inspector of factories contains some interesting data bearing on the industrial conditions of Southland. The report states, inter alia, that notwithstanding the return to civil life of a large number of returned soldiers, unemployment was practically non-existent. In many Industries there has been a marked shortage of skilled workers. This was particularly noticeable in the building and furniture-making trades. Employers are concerned regarding the dearth of apprentices, and it is becoming more evident that something must be done to encourage young persons to take up skilled occupations. The meat freezing industry has experienced a busy period and it is found necessary to increase the building at most of the works throughout the district to cope with the business offering. Motor engineering is also increasing in importance, many new businesses being opened up in this industry. Retail businesses generally have had a satisfactory year, the chief difficulty having been in obtaining supplies. Money apparently has been plentiful. The question of profit sharing has been engaging the attention of many employers, but so far very few have started to put the scheme into practice. One instance has been noticed whereby the minimum wage prescribed by the award affecting the industry is paid to the least efficient, in accordance with their ability, and a percentage of the profits being divided among the workers at the close of the business year. Only those workers who complete 12-months’ service are entitled to participate in the profits.

Christchurch: “I honestly believe that the boom has burst,” said a Christchurch land agent to a Star representative yesterday. He gave as his chief reasons for this development the withdrawal of advances to returned soldiers and settlers, and the high prices of building materials. “There are at present about 100 land agents in Christchurch,” he said. Five years ago there were about 40. The boom came along just after the Armistice and the man who saw its possibilities got into the business. Most of them did well. The housing problem is still as acute as ever, but prices have risen to such an extent that people cannot buy. The price of timber has made some big rises lately. The fact that there is little money at present available for returned soldiers has made a great difference.

The happiest locality in England is said to be a place in Cambridgeshire called Westwick. It has neither a clergyman, a publican, a policeman, nor a church. — ODT, 14.7.1920.

Westwick is a hotbed of Anarchism, without the structures of Civil Society.