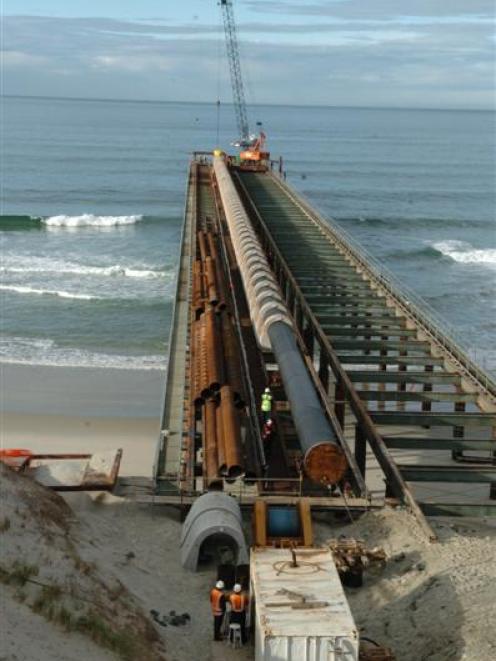 Despite mega-dollars spent on wastewater upgrades, why are the DCC's actual borrowings so low? Photo by Stephen Jaquiery.
Why does the Dunedin City Council borrow and how has Dunedin City Holdings Ltd performed over the past 15 years? In the second of a two-part article Richard Walls defends the council's rates record.

Critics of the Dunedin City Council regularly ignore the fact that Dunedin and Christchurch are among the lowest five rating authorities in the country, despite undertaking major infrastructural capital projects costing millions of dollars.

Why is it that despite spending megabucks on the upgrading of water and wastewater with another $70 million or so still to come on the last stage - our actual borrowings are so low? Actual borrowing by the DCC, as at 31 December last, totalled $157.48 million.

Of the interest and repayments directly funded from rates, $42.37 million relates to Wastewater Upgrades; and $22.38 million to Water Upgrades, a total of $64.75 million.

Set against total spending to date of $160 million on these upgrades, the sums are not difficult.

So, where did the rest of the money come from? Might it just have something to do with the success of Dunedin City Holdings Ltd which council critic Calvin Oaten referred to in another opinion piece "Governance exploitation by another name" (ODT 20/11/2008) and in which he suggested DCHL was being "blatantly exploited"?

Let's go back a wee way to when the first trading companies (or Lates as they were then called) were formed and the cash transfers they made to council as repayments of shareholders advances.

Council used those to repay or substantially reduce debt including some inherited on amalgamation, in particular, those ring-fenced to Green Island Wastewater, Waikouaiti Water etc.

I am certain the ratepayers of those two communities will well remember the substantial reduction to their rates bill.

This reduced the shareholders' advance represented by the $208 million to $168 million.

Council then put the $40 million into the Capital Works Investment Fund (CWIF) and $10 million a year was subsequently used to fund the initial spending on the water and wastewater upgrades.

When Waipori Power Generation and the shares in United Electricity were sold in 1997, the proceeds of $56 million were transferred by DCHL to council as a further repayment of the shareholders' advance.

This $56 million, of course, became the Waipori Fund.

Since then, payments by DCHL have returned $203 million to council. Over the last four years these have been made in accordance with an agreed timetable.

The financial arrangements that accompanied the formation of the companies and subsequent transfers back to council have been, and will continue to be, a massive benefit to ratepayers, as they were intended to be.

This financial year (2008-09), the average residential ratepayer has benefited by a credit (or deduction off their rates bill) of approximately $296 from DCHL, the Property Investment and Waipori Funds.

Without that, the average residential rate in Dunedin would have been $1,762, putting us in about the middle of the national table already referred to and reflecting the true costs of the major capital upgrading to our core infrastructure. (Christchurch ratepayers similarly benefit from Christchurch City Holdings Limited).

In these circumstances, it could be argued that the real costs of the upgrading the debt funding of which continues largely unchallenged and the increased cost of operating the new water and wastewater treatment plants, plus the provision that needs to be made for their eventual replacement (i.e. depreciation) is not fully appreciated.

In retrospect, it could also be argued that council may have erred in not putting part of its investment income from DCHL, Property and the Waipori Fund, into a capital reserve fund for a project like the proposed stadium.

Whether that would have lessened the debate over it, is open to conjecture given the way some of the more strident opponents of that project use debt as the major prop to their point-of-view, but it may have helped focus the debate on the principal merits or otherwise of the proposed stadium.

It could then have been argued that $66 which the average residential property owner will pay if the stadium goes ahead is simply a reduction on the windfall investment income that council receives each year. It could be.

The same could have applied to the option of using the Waipori Fund, in whole or part, as I suggested two years ago.

That, of course, would also have had the same effect of reducing the flow of income to council as the current proposal - it would have just changed the source.

We would have realised some great capital gains though.

So, why does council borrow? The first and obvious reason is to finance high-cost capital projects which cannot be funded from cash flow.

The second is the principle of intergenerational equity so that successive generations, who use and benefit from these long-term assets, get to pay their share of funding them and not just the present generation of ratepayers.

The pressure on rates of these projects and the statutorily imposed requirement to provide for their depreciation and those of all capital assets (including roads, parks, museums etc) remain the significant driver behind rate increases over recent years.

New stadium or not, redevelopment of Carisbrook or not, that will remain the position for the short- to medium-term ahead.

If there is to be any debate on debt, it should focus on what loans are raised for and the management of debt rather than the level. That means major capital projects.

We cannot borrow to pay for ongoing operating/maintenance costs.

Nor would it be good fiscal management to do so. In kitchen-table speak, that would be like taking a mortgage to buy the groceries.

The ultimate assurance comes from credit rating agency Standard & Poors in their most recent report: "The ratings on Dunedin City reflect the council's strong management and its track record of fiscal discipline."

A very simple ethic underlies borrowing: You do not borrow what you cannot repay and there is absolutely no basis for the accusation of a buy-now-pay-later philosophy operating at the Dunedin City Council levelled by the ODT in a recent editorial.

Richard Walls is a Dunedin ratepayer, city councillor and chair of the DCC's Finance and Strategy committee.