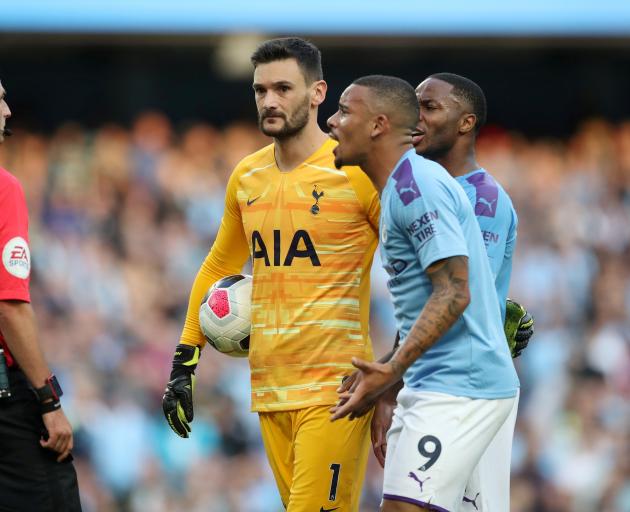 Manchester City's Gabriel Jesus remonstrates with referee Michael Oliver after a goal was disallowed during an English Premier League match. Photo: Reuters
Gabriel Jesus' disallowed goal in the English Premier League, in a match between his club, Manchester City, and Spurs when a controversial handball decision was given by the video assistant referee (VAR) system, has fuelled the already fierce debate about the use of technology.

The handball law was changed in March 2019 due, in part, to the use of VAR. The new rule said a handball that gave advantage to the player handling the ball would be penalised - even if it was accidental. Previously the law had given the referee the discretion to rule on whether a handball was accidental. Use of technology effectively removed the officials' ability to use their discretion. Jesus' handball was one of those situations.

VAR has already become a big talking point in top-flight football after the same City player had a goal disallowed in the first round when his team took on West Ham, this time over a marginal offside decision.

This has led football's lawmakers to review the approach taken to offside decisions. The officials should call offside only if there is a ''clear error''. And there are questions over whether the technology is accurate enough to be able to measure offside to such a degree.

Football has followed the trend of other sports that have already adopted technology. Rugby league provided a video referee in 1996. Cricket included the Hawk-eye ball tracking system from 2001. Rugby union introduced the Television Match Official (TMO) in 2001. And tennis began using Hawk-eye in 2002 to judge line calls.

The introduction of any technology can mean that the experience of spectators changes - and not necessarily for the better. Technology reduces errors, which is of vital importance in today's big-money sporting contests. But it also means a goal can be scored, celebrated and then disallowed, meaning spectators at the stadium do not act spontaneously. It is just not the same.

Another criticism is that spectators often do not know what is happening on the pitch when VAR is being used. The use of big screens in the stadiums to replay VAR decisions has been approved for the 2019-20 Premier League season, displaying the incident to supporters to help them understand what is going on. But criticisms of the process continue and it is still to be decided whether spectators should be shown the entire VAR decision-making process.

At home, spectators have the benefit of technology. There are more camera angles, sharper pictures, and the benefit that any VAR review is immediately communicated and explained. As the BBC noted, people are beginning to wonder whether it is not better to save money and stay at home to watch on television. That would be a disaster.

We know changes in the interpretations of law between countries can change the behaviour of both officials and players. It is too early to tell how VAR will change how football works, but we do know technology has changed player behaviour in cricket.

The decision review system (DRS) was introduced in 2001, aimed at improving decision-making accuracy for catches, and enhanced in 2008 in order to detect leg-before-wicket. Teams are now using their reviews tactically, which can change the rhythm of a game and interrupt a batter's concentration - surely not within the spirit of the game.

There have also been incidents of player behaviour influencing the removal of technology. Hotspot is an infrared imaging system used to show whether a ball has struck a batsman, bat or pad.

But it was taken out of the DRS after it was shown that placing tape along the edge of the bat could fool the thermal imaging cameras that were there to detect the heat created by the friction when a ball hits a bat, no matter how slightly.

Technology can also put pressure on match officials, which can contribute to negative performances. The first 2019 Ashes test match between England and Australia had several on-field umpire decisions overturned following the use of DRS.

Pressure for cricket umpires comes, at least in part, from media exposure and the use of technology in the game. This is also true for football referees who are exposed to extensive media coverage.

It is hard enough for officials to do their jobs properly with the pressures outlined above. But then take into account that different sports in different countries are having to contend with variations in the way technology is applied. (See, for example, the controversy over goalkeepers moving off their line when a penalty is taken.)

There is big money at stake in professional sport, and careers can hinge on a key decision. So sporting administrators need to be careful about the impact any changes to their sports have on the live and televised ''product'' sold in TV rights deals for millions of pounds around the world. If supporters stop watching, if television companies stop paying, they have a major problem.

With technology, sometimes it seems we need to be careful what we wish for.

-Tom Webb is a senior lecturer in sports management and development at the University of Portsmouth.