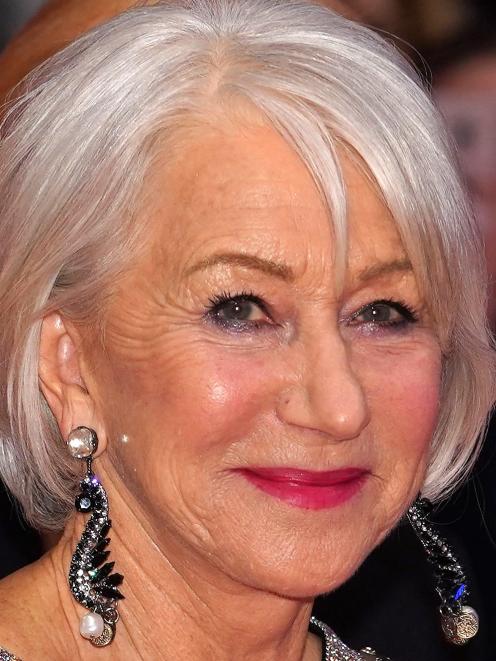 Helen Mirren turns 75 this year.
Seventy-five years of experience doesn’t mean you have to feel your age, writes  Gina Barreca.

Born during a particularly busy year, you arrived at the end of World War 2. Fear and love and urgency created the seismic events leading to the baby boom, which is right about where you came in. The use of nuclear weapons, the liberation of concentration camps — along with the recognition that millions died in them — and the realisation that nowhere is safe led people to do what people do when they need to re-establish a sense of identity, family, community and country.

Maybe back in ’44 your parents were listening to Bing Crosby crooning I’ll Be Seeing You or The Merry Macs playing around with Mairzy Doats, and in March of ’45, there you were, plopped down in a rickety playpen with a spit-curl on your forehead, dressed in plaid hand-me-downs, glass baby-bottle in your fist, looking like an ad for Gerber’s.

A 1945 ad for Gerber’s actually addresses you, the postwar tyke, directly: "It’s a great world you’re born into, and just how lucky you are you’ll never know till you grow up! You will enjoy life in the world at peace. Your dad and mother’s generation paid a high price to win this better world for you."

From those very words, it becomes clear that you emerged into your own existence with massive if not insurmountable burdens of guilt (as the Gerber ad goes on to proclaim, "For parents are that way!") as well as a nail-bitingly desperate need to justify every waking moment of your life. The greatest generation left you a legacy almost impossible to assume.

But, hey, you had tiddly-winks, radio flyers and hula-hoops. Eventually, at age 16, you also had Linda Scott singing I’ve Told Every Little Star which made it to No3 in the 1961 pop charts.

The 75-year-old I know best, my husband Michael, went to Teaneck High School with Linda Scott. When Cousin Brucie plays that song, he turns it all the way up and tells me about how he went to high school with the girl on the radio.

According to Wikipedia, Scott is also turning 75 this year.

When I pointed this out, as I did recently, why did it amaze him? Is it because, in his heart and even in the glimpse of the real self that he sees in the mirror, he’s still 16?

I bet that very few 75-year-olds "feel" their age because they are the first to turn 75 in this "better" world that Gerber foretold. Anybody who makes it to 75 is supremely privileged in at least one respect, because survival is a kind of gift.

I’m 63 and understand that not everybody gets a chance for admission into the over-50 club. Getting in has little to do with recommendations and a lot to do with luck.

And yet, dear Michael, your 15-year-old self should stand in awe of how far you’ve made it and how well you’ve done, but I doubt the skinny kid with the Brylcreemed hair would have dared to guess at the affection and respect, the books and the lifelong friendships, the accomplishments and the accoutrements you’ve gathered year by year.

You’ve become more than you could have imagined in those lean and literally hungry days as a longshoreman’s kid.

I won’t say I’m in awe, because I’m not. We know each other too well for that. But I remain impressed, and I am increasingly proud. You never pretend to be anything except the silverback that you are now. You allow delight and surprise to eclipse impatience and frustration, amazed at your own good fortune.

There are wrinkles around your eyes as well as my own.

But my heart is a smooth piece of paper where, every day, I write your name. — TCA