Argument by numbers fraught with fish-hooks 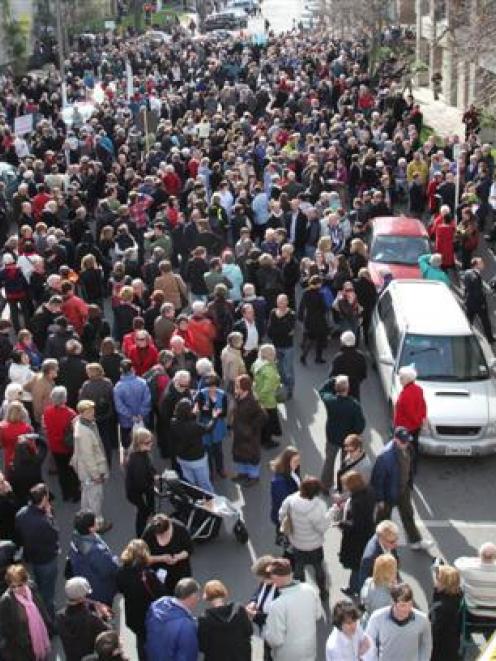 Thousands protest the possible loss of neurosurgical services in Dunedin during a march this month. Photo by Craig Baxter.
Dunedin surgeon Mike Hunter, in the fourth of a six-part series, runs a ruler over the numbers, specifically the ratios of neurosurgeons to general population in different countries. Mr Hunter is clinical leader in intensive care and responsible for rescue helicopter medical retrieval.

One prominent issue in arguments over the location of neurosurgeons concerns the ideal ratio of neurosurgeons to population and the minimum number of procedures needed to maintain skills. Strikingly, opinions among neurosurgeons around the world vary hugely.

Mostly, their opinion reflects something close to the numbers they actually have. These numbers appear to have been progressively coming down, and there is no hard evidence to support any of the proposed numbers - but plenty of opinion.

None of this appears to deter the Neurosurgical Society of Australasia from stating unequivocally that the optimal ratio for New Zealand and Australia is one neurosurgeon to 175,000 people.

International comparisons are interesting. The European Union published data in 2009 showing the mean across all EU nations was 1:99,000 but this was significantly higher than the median figure of 1:84,000 because of the distorting effect of the United Kingdom figures. Its ratio of 1:294,000 is double that of the Netherlands, which is the next country in the list. The United States has a ratio of 1:62,000, and the most extraordinary number comes from Japan with one neurosurgeon for every 22,000 inhabitants. So which number is right?

Clearly, these large variations indicate major differences between countries in intervention rates, or that neurosurgeons in some countries do a wider range of procedures, or both. The points to take away here are threefold.

Firstly, the supply of neurosurgeons tends to determine the numbers thought to be optimal.

Secondly, there is considerable overlap between specialties at the margins (particularly orthopaedics and general surgery with neurosurgery). A change in the numbers of one will result in members of the other filling or vacating that niche.

Lastly, we need to appreciate that the figures coming out of the British Neurosurgical Society are significantly out of line with the rest of Europe.

A second area of major controversy is the number of procedures surgeons need a year to maintain expertise and/or avoid complications. The NSA recommends 135 major cases to maintain skills, but there is no hard evidence to support this number.

It may seem intuitively obvious that the more procedures you do the better you will be, but this is not necessarily true. A bad surgeon (clumsy or poorly taught) will seldom become good by doing a poor operation twice as often, while a talented surgeon may pick up specific skills very quickly and master a procedure in only a handful of experiences. These factors are seldom addressed in studies, and are extremely hard to measure.

The problem with studies that purport to show associations between workload and outcome is that they are seldom assessed by unbiased assessors, are subject to publication bias and do not control for surgical ability, patient selection or other confounding factors.

Almost all studies of this type are published by metropolitan specialty units which are pushing for centralisation, which can select the group or unit against which they are going to compare themselves, and which probably will submit for publication only when results are in their favour.

It is self-evident that differences between individual surgeons are significant in most if not all disciplines, because there are a range of abilities and skills. Sometimes, variations in outcomes are quite significant between surgeons within the same unit, although this is not openly discussed in public.

Those who obtain better results than their peers tend to publish them in surgical journals. Those who don't remain silent. Often, the better results are attributed to other factors, and often those around which there is vested interest.

This sort of study has been common in recent decades from specialty units, with the obvious argument that all patients should come to specialty units for particular operations by sub-specialists because they will get better outcomes. This may well be true, but it may not be, and often isn't.

Providing the surgeon outside the specialty centre is following best practice and is skilled and well-trained, very good results can be achieved even with quite low numbers, and so provide care closer to where people live, a benefit often under-appreciated by big-city dwellers.

A surgeon who is widely skilled may not need to do a particular operation very often if the skills he uses for other operations are relevant to and helpful for that procedure.

There are a few operations which are high-risk, complex and infrequent where there is quite good evidence to show that concentrating them in fewer surgeons' hands is truly better. For most procedures this is not the case.

We need to be careful, however, to insist that any evidence put up in the context of this argument is robust and valid.

In the end it is outcomes for patients that matter, and proper studies that actually establish causation are required before we simply assume that large metropolitan units always get better results.

There are, in fact, published studies showing it is possible to obtain very good results with small surgical volumes in small centres.

There is, in my view, no reason to believe that treatment outcomes in a four or six-surgeon unit in Christchurch would necessarily be better than in a two or three-surgeon unit in Dunedin. Yet, this seems to be an assumption underlying much of the media and political commentary on this matter.

It was clearly exemplified by Mike Hosking on TV One's Close Up programme recently when he asked why we wouldn't be prepared to exchange access for better treatment. There isn't a shred of evidence to back this up.

Clearly, the message is that we must recruit good quality surgeons, and it would be wise to find surgeons who already have substantial experience, i.e. are not on the early part of the learning curve. This would not be a good job for surgeons right at the start of their career.