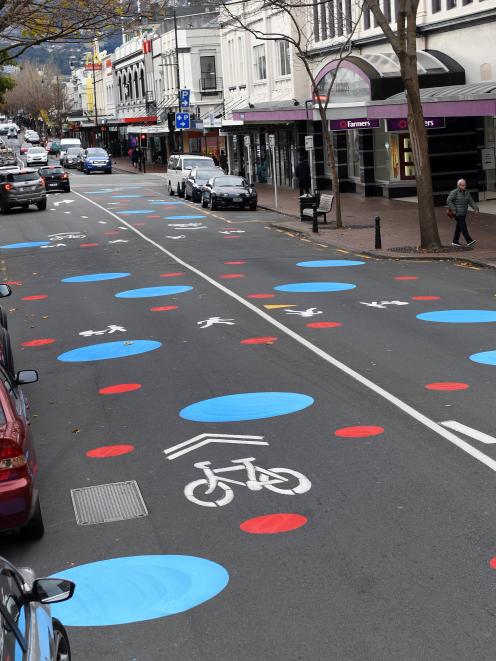 George St has been transformed into a series of dots and roads signs. PHOTO: STEPHEN JAQUIERY
If we really want to support businesses in Dunedin, we need to ask how we can help, writes  Hilary Calvert.

Inconveniencing Dunedin people who dare to use cars, with the intention of encouraging more pedestrians, is likely to be ineffective.

Destroying the viability of the best pedestrian spaces we have is downright silly.

We are fortunate in Dunedin to have a series of malls in our downtown area around George St. It was such a good idea to build these that the DCC got in on the act and now we have a 50% share in one of them, namely Wall St.

Malls are by definition covered pedestrian areas which exclude cars. They attract people for recreation, shopping, eating and drinking. They have the advantage that there are public toilets available. They have contests and fashion displays.

And all of this paid for by the tenants in the malls.

Having malls (pedestrianised areas) attracts a variety of people and provides work for many.

Most places malls are located are not in the middle of town, they are out where plentiful parking can be provided.

We have these wonderful pedestrian areas in the middle of town.

Yet for some strange reason the Dunedin city councillors are overlooking these in an attempt to follow some idea that we should have pedestrians walking along George St rather than in the carefully provided pedestrian-only areas we already have.

The ex-city councillor who has described himself as trading in George St for many years is actually in a mall near a car-parking building.

But now the war on cars has escalated and the DCC has tried even harder to discourage motorists in downtown Dunedin by introducing a 10kmh speed limit, under the twin ideas that people on the footpaths need to stay 2m apart and that this will support businesses impacted by Covid-19.

How this speed limit could keep pedestrians 2m apart is unknown. And how cars could actually drive that slowly is also a mystery. Even in countries which have a prohibition on kerb crawling you don’t have to drive this slowly to be prosecuted.

Scooters travel faster than this on the footpaths, which is surely more dangerous. And there was already a speed limit of 30kmh before this experiment.

What is clear is that cars are being discouraged, and that this is supposed to benefit business.

Those in business know to ask customers ‘How can I help you?’, since they need to know that in order to meet customers, to sell their products and services.

The DCC appears not to have approached the business community to ask this basic question. There is no apparent support for these ideas, apart presumably from those selling gaudy little street bubbles being stuck to the pavement and whoever benefits by charging the DCC for installing traffic signs.

It is not a question planners and councillors can know the answer to without asking.

As it is, they have come up with a plan that is likely to damage those who trade in the malls, since ease of access is all-important.

We should start by not damaging the experience we can all have now with our pedestrian-only spaces in the malls.

It would be easy enough for us to lose the mall experience, and therefore the covered pedestrian spaces, in central Dunedin. Retail and hospitality are under threat. Consents for building in Dunedin are not easy. Someone creating a mall on a motorway outside town, as is done all around the world, and sucking the vitality out of the middle of Dunedin must be a possibility.

If we really want to support business in Dunedin, ask how we can help.

If we want to support pedestrianisation in the middle of Dunedin, start by not destroying what we already have.

If it is just because there are politicians in Wellington with bizarre notions about extending footpaths for avoiding each other during Covid-19, our mayor should explain to them in Wellington that we have malls in downtown Dunedin and we want them to stay.

It may be that with enough public pressure and national ridicule our councillors will change their minds, like they did with the pocket parklets.

Hopefully, we can stop wasting money on such projects by not even starting the next proposal.

When Mayor Hawkins held up a sign saying 10 it was upside-down. These ideas are a 1 on a good day.

This council is not pro business, pro pedestrian, pro Dunedin city nor pro humanity.
It's infectected with an ideology that sees humanity as a scurge upon the earth that needs to have it's activity restricted, even if that means repression by stealth or force.
It is not a council that sees itself as representative of the people but of some utopian future founded in an elitist belief that they and their experts know best because they keep hearing the same message echo inside their thought bubble.
Their version of diversity is a sexist, racist, deconstructionist, alternative culture which has nothing to do competence, diversity of thought nor free speech.
They have no concept of the private enterprise world, only the sheltered, mono political environment inside the public purse and education system.
Their comprehension and appreciation that their world is sustained by the hard work and risk of private sector people is zero. They completely fail to understand that the physical, physiological, financial, fallout of this pandemic falls completely on the private sector.
It's not just the waste of time and money, it's the waste of focus on the real needs of the city, that sucks.

Ask the businesses, then launches into own opinion. Did you ask the businesses Hilary? Or is this opinion fueled by your cronies and free lunch events. Ban the Boomer!! This self interest puts me off ever shopping in these stores again, nothing but self serving fat cats. I recommend online purchases, safe secure and convenient.

Hilary, the ORC details your conflicts of interest, 17 properties!!! one being 106 George St. Does this influence your view point slightly? Are you self serving in public office. Tut Tut, shame on you!!

Many of Green Party theories are categories of the mind. We are beginning to understand what happens when their sweet sounding theories are exposed to the category of reality. Chaos.

Why not ask those businesses how to achieve some of Mr Hawkins intent. Why leave it all up to green party ideology, which seems not up to the task. If we are passive we will repeatedly get madness as painted bubbles. What are these Green Comrades up to?

Hillary Calvert writes "We have these wonderful pedestrian areas in the middle of town. Yet for some strange reason the Dunedin city councillors are overlooking these in an attempt to follow some idea that we should have pedestrians walking along George St rather than in the carefully provided pedestrian-only areas we already have." Strange DCC decisions!

They are visionaries! Well, not in our world of course but they don't live in our world. They live in a world where nobody holds them accountable and they can do what they want. They are a ragtag bunch of misfits incapable of making simple decisions in a competent, professional manner. Only one of them is qualified to run the city, the rest of them have issues stringing a sentence together without drooling. From a personal perspective, I don't like Vanderviss. However, he is the only one who possesses the business acumen to run the city. I've got a refrigerator bulb brighter than the rest of them combined. So Dunedin, How much more Fraud, Waste, and Abuse do you plan on enduring before you send these dullards packing? How much more of YOUR MONEY do you want to see wasted? WE deserve PROFESSIONAL representation and we aren't getting it! $145K for Dunedin, A pretty Good Plan D...really? Do you think that is ratepayer money well-spent? I know my kids could come up with a much better slogan and the cost would only be a 6 pack of Beer! Why do we continually allow ourselves to be screwed by these pathetic losers? Would you hire any of them to work for you? Hell No!