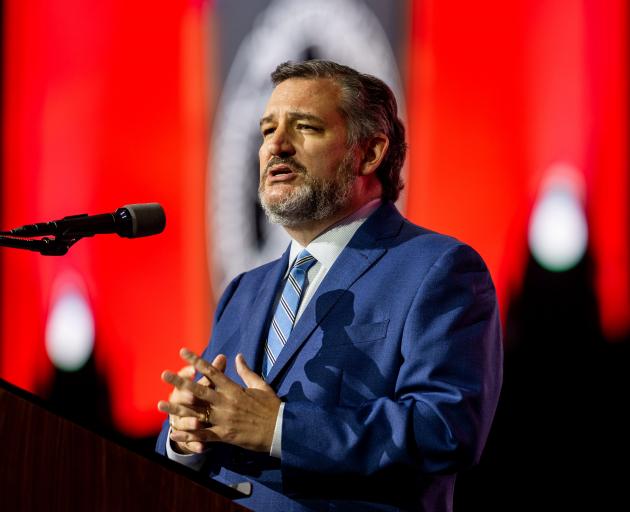 US Senator Ted Cruz addresses the National Rifle Association’s annual convention, at the George R. Brown Convention Centre in Houston last week. PHOTO: GETTY IMAGES
I have been trying to downplay it.

But I am having what looks very much like a Ted Cruz moment, without meaning to.

Ted and I do not have much in common. My idea of a tea party would involve plenty of slurping of the cup that cheers but not inebriates, and scoffing cake and bikkies. Sarah Palin would not be on the guest list.

Nor am I particularly enthusiastic about guns although I was brought up around them and once envied boys’ cap guns and spud guns (the ones that fired little plugs of potato). Now, I’d prefer to use spuds for mashing, deep frying or roasting.

My father shot deer, wild pigs, the odd goose and sometimes ailing farm animals — we were a long way from the nearest vet in those days. Dad’s rifles were kept in the cylinder cupboard. Although we could have accessed them, we didn’t dare to.

Besides, the ammunition was kept in what we called the sprong drawer in the kitchen — so heavy I don’t remember having the strength to open it as a child. It smelled deliciously of gun oil and mystery.

Some family members and friends still hunt, but while I relish any game which comes my way, I have no desire to shoot anything myself.

I am not sure if Senator Cruz goes out hunting, but his love of guns shines forth, possibly helped along by the $US176,000 he has reportedly received from the influential National Rifle Association (NRA).

He and former rival now chum Donald Trump were brazen enough to address the NRA’s annual leadership forum mere days after 19 primary school pupils and two teachers had been gunned down by a teenager armed with a semi-automatic assault rifle.

Both argue tightening access to such guns or guns generally is not needed to help prevent massacres. (Ironically, the Secret Service took control of the venue before former president Trump’s speech, confiscating firearms, firearms accessories, ammunition and toy guns, along with knives, laser pointers and pepper spray.)

Donald wants more guns. Arm teachers and everyone would be safe, apparently. I may not be the only adult who can think of at least one teacher they would not want within cooee of a gun because of the risk of them using it in anger.

For tone-deaf Ted, it was all about the doors, because the Uvalde gunman entered the school through an unlocked back door. He wants every school to have one entrance door staffed by armed guards.

Among the problems with this is that with big schools it would take ages for everyone to get in. Couldn’t a large crowd jostling cheek by jowl to get through one door be an attractive target for a crazed shooter carefully stationed outside?

In common with Ted, I have been banging on about doors as a way of ignoring any number of more important and relevant issues.

Specifically, the doors concerning me are the automatic (?) ones at Dunedin’s Bus Hub toilets. You slide the door to shut it, then press a green button which should turn red to confirm the door closure. I have found this, well, rather hit and miss. Sometimes the red light comes on, the disembodied little man tells me the door is closed, and then as soon as I take my finger off the button, the green light returns, the toilet flushes and the little man tells me the door is open.

Do this too many times and the little man groans, says he doesn’t feel too well and then there is no hope of shutting the door. Once, I achieved that in both toilet cubicles.

I varied my finger stabbing technique (staccato, soft, hard) to see if that made a difference but then if it worked, relief overwhelmed any memory of what I had done.

I wondered if other people had similar issues. Not that the Dunedin City Council knew of. (It took over the management of the loos in 2018 after they were commissioned by the Otago Regional Council.)

My irritating questioning resulted in an ORC access adviser and educator checking the doors, after which the two organisations issued a joint statement saying there was a problem with the door mechanism. The ORC was unsure when or how this occurred.

The DCC organised for it to be fixed. (Signs informing patrons how to report issues are planned.)

After receiving this news, I had to check. Success in the south cubicle, but a failure after several attempts in the north (although I gave up before the little man told me he felt sick).

Others later seemed to be able to get both to shut, judging by the occupation lights outside.

Oh dear. Like Ted, am I part of the problem, but too stupid to realise it?