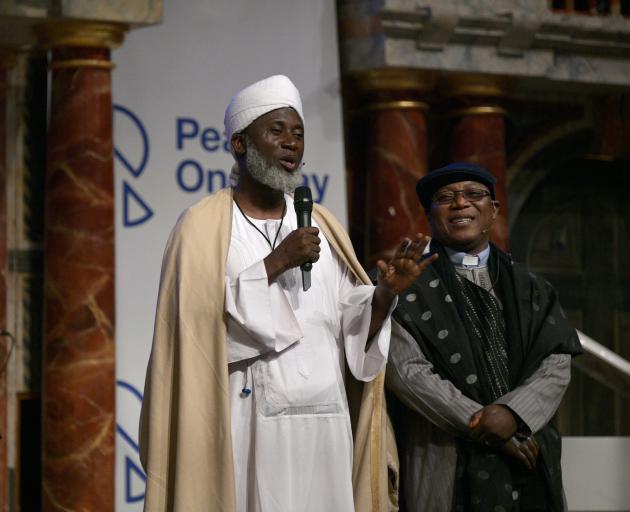 Imam Dr Muhammad Ashafa (left) and Pastor Dr James Wuye at a Peace One Day event at the Globe in London. Photo: Getty Images
The power of forgiveness converted the bitterest of religious enemies in Nigeria into champions of peace and tolerance. Ian Harris reports.

You've had your right hand hacked off by a machete in bitter intercommunal fighting and been left for dead. But you survive, recover - what now?

The natural impulse is to seek revenge, call for accountability, demand justice: victimhood plays well in the public media. And the hatred that led to the clash in the first place seethes on.

It took time, but two Nigerians, Pastor Dr James Wuye and Imam Dr Muhammad Ashafa, chose a path less travelled. Wuye had led a Christian militia in conflict with Muslims in Kaduna, northern Nigeria, Ashafa a Muslim one. In one of these raids Wuye's right hand was severed. Ashafa lost his spiritual mentor and two cousins in the same long-running struggle.

Religion had stoked their enmity, and suspicion and hatred could well have continued unchecked. Yet now they call each other "brother", and together lead a movement for forgiveness and reconciliation that's inspired by the very religions that once made them enemies.

Except, they say, don't blame their faiths for that. Blame the politicians who exploit perceived injustices, marginalisation and lack of opportunity, and bad religious leaders who invoke faith to support them.

Their own reconciliation began in an unlikely way, as the by-product of a child immunisation campaign by Unicef in 1995. Fear and lies fanned suspicion and resistance. Communities needed to come together to make the children safe, and the pastor and imam were asked to give a lead. A journalist who knew both men suggested they should meet and talk.

Later, the British Council offered a neutral space for 100 youth leaders from both religions to come together, and again the imam and pastor became involved.

A debate centred on their faiths was suggested, but Wuye was not keen. Such a debate would only create a winner and a loser, and besides, he had been taught that if he handled the Koran he would go mad. Instead he proposed a dialogue, a platform of engagement where they could explore their faiths' teachings so as to bring to light common precepts and concerns.

Wuye said it took a year to dismantle his own structures of demonisation and hate, and three years working with Ashafa to build trust, respect, then friendship. They addressed religious divisions in their communities by founding an Interfaith Mediation Centre and training imams, pastors and other leaders in peace-building. Both remain fully committed to their faiths, but "we walk respecting our differences".

Out of these encounters emerged principles and practices that now guide them in a joint ministry fostering peace and reconciliation: Do no harm. Engage in dialogue. Build on your common humanity. Find things you can do together. Compete with one another, certainly, but only in doing good. Don't set out to solve values-based conflicts: "Instead, massage them, because as you inch towards another person that person will change, and so will you." Above all, forgive your enemies.

"Forgiveness is the weapon of the very courageous," Wuye said. "The weaklings never forgive." Ashafa added: "Unforgiveness is as good as taking poison and expecting your enemy to die. Finding a place to forgive is what gives you strength."

Critics have accused both men of "compromise" and "treason", and they have received death threats. They deplore the way bad teachers misuse and abuse religion to divide and lead people away from the ideals of their faiths. Instead, they urge: "See beauty in diversity. Live by the golden rule that all religions share: `Do unto others what you would want others to do unto you'."

Their experience in Kaduna turned them into men with "the most important mission in the world", they say, by showing how forgiveness and reconciliation can transform enemies into friends. The mission expanded and has taken them to more than 70 countries.

In August it brought them to New Zealand, both to learn and to thank New Zealanders for the compassion they showed after the Christchurch mosque massacres in March.

"This is a gift to the world that has global implications," Wuye said. "You showed positive solidarity by the way you came together, from the Prime Minister to ordinary citizens and children.

"Because of that, many parts of the world did not react violently to what happened."

He contrasted that with the angry reaction in 2005 when a Danish newspaper published cartoons lampooning the Prophet Muhammad: "Denmark didn't handle that well. Muslims round the world reacted; 262 Nigerians died in protests."

Wuye added: "You have set the bar very high. The challenge is to sustain that."

The concept of forgiving sins is for being able to say to sin and evil "Vamoose, Go away, Depart from him/her and me." It is not for making people feel warm and cuddly.

Only a perfunctory appraisal of all religions could come up with this one: "Live by the golden rule that all religions share: `Do unto others what you would want others to do unto you'."
I wish more people would do their homework before they or someone whose words they agree with speak such nonsense. All religions do not equally value truth. All religions are seen by the untaught as more or less equally valuable to humanity. They are very superficially in any kind of agreement about very little and all substantially in disagreement about their foundations.