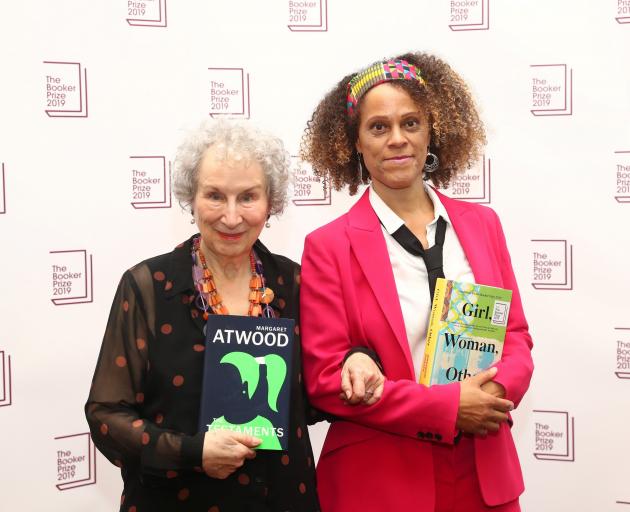 For the first time since 1992 and only the third time in the illustrious history of the Booker - the prize has been awarded to two novels: The Testaments by Margaret Atwood, and Girl, Woman, Other by Bernardine Evaristo.

In accepting the shared prize, both women were gracious. Atwood, at 79, felt that she was ''too elderly'', and was happy to share; and Evaristo was honoured to share with the feminist literary legend. The 50,000 ($NZ101,000) prize is to be divided, and Atwood has announced that her 25,000 will be donated to the charity Indspire, which aims to enrich Canada through Indigenous education.

The value of winning the Booker is not just the honour, of course. For most authors, the value is the cash prize and the huge increase in sales which follows from the win.

Last year's winning title, Milkman by Anna Burns, has sold more than 500,000 copies and has changed Burns' life immeasurably, as she made clear in a moving speech at this week's black-tie awards dinner in London's Guildhall.

As the sequel to The Handmaid's Tale (1985), The Testaments is already a conspicuous and assured commercial success. Live launched in 130 cinemas worldwide on September 10, the hardback edition has sold more than 179,000 copies in the UK and has performed well in terms of downloads as well.

Meanwhile, the other winning title - Girl, Woman, Other - has sold only 4000 copies in the UK to date, according to Nielsen Bookscan.

The Booker Prize process takes novels of a very different kind and places them on the same list. A panel of five judges is appointed each year and they spend most of that year reading submissions. This year, the panel, chaired by Peter Florence, got through 180 novels in 11 months. Having produced a longlist of 13 novels in July and a shortlist of six in early September, the jury's task was to choose one winner in accordance with the published rules which explicitly state that: ''The Prize may not be divided or withheld.''

This rule was established in 1992, because a committee chaired by Victoria Glendinning insisted on two winners: Sacred Hunger by Barry Unsworth and The English Patient by Michael Ondaatje.

Even a year later, this palled with the well-known literary agent Giles Gordon, who thought that the Booker is about ''winning not sharing''.

That a panel of five could not reach a consensus after hours of discussion elicited gasps of frustration and indignation from those who were at the Guildhall. It suggests that at least one panel member was exercising some sort of veto, and brings to mind the story of Philip Larkin, chairman of the judges in 1977, who threatened to jump out the window if the title he preferred did not win (it did).

But Florence preferred consensus to coercion and the panel wanted to signal that both winners are of particular note. That's the official line, anyway.

The Testaments is assured, compelling, carefully plotted, slickly written and worthy of the hype. The structure of three different types of ''testimony'' - that of Aunt Lydia and two Gilead witnesses - is especially appealing and works well. It is a book which reads quickly and its appearance now, so many years after The Handmaid's Tale, is testament to Atwood's vision and creative resilience.

Resilience has clearly been a huge issue for Evaristo, who is a longstanding advocate for the inclusion of people of colour in the arts. Born in London in 1959 to a white English mother and Nigerian father, Evaristo was educated at Rose Bruford Drama School and Goldsmith's College. She founded the Theatre of Black Women in 1982, and has written seven novels to date.

Girl, Woman, Other is a multi-stranded narrative which gives voice to the experience of being a black British woman through 12 interwoven stories ranging from Newcastle in 1905, through London 1980, Oxford in 2008 and Northumberland in 2017. The work abandons the conventions of standard paragraphing and punctuation, a technique which has lead some readers to describe the form as ''free verse''.

But Evaristo's prose lacks the compression, lyricism and intensity of verse and this book often plays to very predictable cliche. This, arguably, is the point: cliche enables us to see beyond - and to think through - the issues of diversity and representation which are so central to individual racial experience.

Speaking at the awards, Atwood herself said: ''I kind of don't need the attention.'' When she won the Booker in 2000 with The Blind Assassin, she had already been nominated on three other occasions, including in 1986 when The Handmaid's Tale lost out to The Old Devils by Kingsley Amis.

Perhaps the judges should have weighed these losses and gains in the balance. If Evaristo's work is worth honouring then surely it was worth the honour which would have come from being the sole recipient of the Booker Prize 2019.

-Clare Hutton is a senior lecturer in English at Loughborough University.

The decision to have two winners is fairly symptomatic of our times. Even judges of a book competition are so busy being politically correct they can't make a decision.

This is hardly surprising when we see endless examples on a daily basis all around us, from school, governments, courts, everyone tip toeing about to be as caring and socially involved as they can.