Big Brother is watching you! 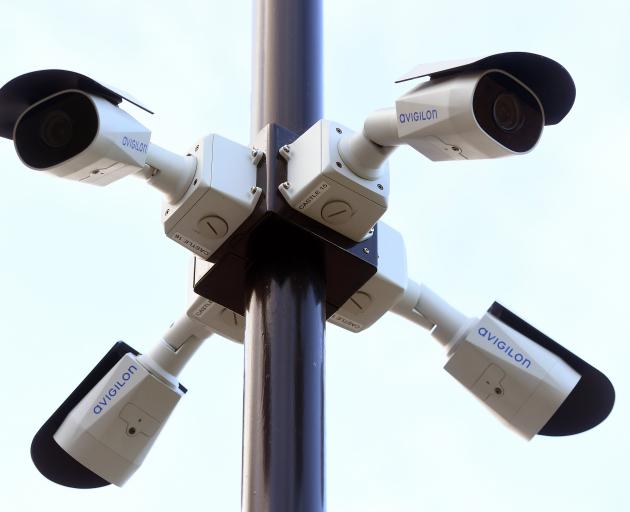 New CCTV cameras at Otago University. Photo: Stephen Jaquiery
Mention the words ''surveillance'', ''DCC'' and ''North Dunedin'' in one sentence, and a swarm of toga-clad scarfies will melt out of the undergrowth, angrily muttering about ''Big Brother'', ''paranoia'' and ''invasion of privacy''.

Recently, the University of Otago unveiled plans to add 60 extra closed-circuit television cameras (CCTV), on and around the university campus. But are CCTV cameras really effective in reducing or deterring crime? And should the university and the Dunedin City Council explore other options?

According to Vice-chancellor Harlene Hayne, the university is confident ''the cameras just by themselves will have a preventative effect on crime''. However, according to the British Home Office, ''the use of closed-circuit television in city and town centres and public housing estates does not have a significant effect on crime''. The jury is seemingly out. So how do students feel?

A straw poll conducted by the Otago University Students' Association in 2016 revealed that from 466 votes, 52% were in favour of the cameras and 48% were opposed. Only 18 more students voted for the cameras than against them.

Personally, I don't believe this small poll is indicative of student feeling. This blanket surveillance initiative is an antagonistic gesture on the part of the university, and has the potential to quell student protests and other freedoms of democracy. Over my five years as a scarfie, I've never felt the need for constant CCTV surveillance. I've lived in flats all over North Dunedin, and seen my fair share of couch fires, street riots and flat parties. But I remain confident Campus Watch will continue to restore law and order sufficiently. Installing 60 new CCTV cameras only imposes a sense of parental or institutional supervision that students will no doubt rebel against.

It seems to me the University of Otago is taking an ''ambulance at the bottom of the cliff'' approach to vandalism and student misbehaviour, rather than addressing why students might feel unsafe or threatened on campus in the first place.

The prevalence of alcohol abuse throughout student culture is an issue that needs to be examined, as is the lack of appropriate student cultural venues in North Dunedin. Every Wednesday, a long line of students can be seen snaking out of Re:Fuel, waiting outside in the rain.

Every weekend, the lines for town similarly wind through the streets, as each bar and club is packed to capacity. Unsurprisingly, fights frequently break out in these lines. Meanwhile, other young people end up throwing street parties that can get out of hand.

Students want to perform for their mates, and to participate in the shared beauty of the grass-roots Otago University student culture. There are currently few Dunedin spaces that can affordably and regularly facilitate this.

In my opinion, we should assist student culture in celebration, sharing, and the building of confidence and growth, by providing space and the means for people to celebrate safely. For example, there is a derelict warehouse in North Dunedin that could fit 4000 people, be kitted out as an events and community centre, and become a positive focus and emblem of a new cultural direction.

Every room at the OUSA Clubs and Socs Building is regularly booked out. With a larger space, OUSA and the university could work together to host regular positive events, featuring alcohol alternatives like kava-kava, which is clinically correlated with alleviating the symptoms of anxiety.

There is a general feeling among many of the students that the university is unfairly cracking down on their culture. Students just want to have a good time and celebrate with their friends - this is just unfortunately driven through the easiest available avenue of alcohol consumption. I also understand from the institutional perspective that safety and liability are paramount, and Otago University has a world-class reputation to uphold.

Otago University runs a top-tier educational programme that provides expertise and academic opportunities like nowhere else in New Zealand. But the university needs to understand a huge proportion of students also long for the accompanying cultural experience. Punitive measures such as the CCTV plan will only breed resentment and drive problem behaviour further into the streets and back-alley flats where they cannot be addressed.

We should be working towards a mature and trusting relationship as equals, one that can set the tone and example for other universities and student bodies around the country.

-Jean Balchin is an English student at the University of Otago. This article was written with the help of Josh Smith, a student advocate and campaigner for more student-friendly spaces.