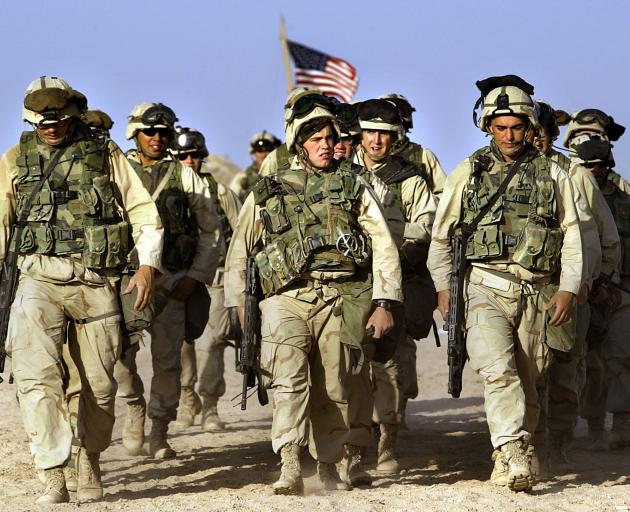 Those who serve in the military have an instant bond. PHOTO: REUTERS
To mark Veterans Day in the United States, Gina Barreca explores the special bond among veterans.

My father never wanted to talk about the war. A waist-gunner and radioman on a B-24, he was unlike some other veterans from the neighbourhood who traded stories about the places they'd been and adventures they'd had.

But the only detail I knew about my dad's experience in World War 2 was that he liked when they served chicken-fried steak.

I was probably 13 when he told that story, and with the unblinking sanctimony that only a teenager can wield, I remember saying, "Wasn't that really unhealthy?" In a look that I can only describe as for-a-smart-kid-you're-remarkably-stupid, my father replied, "We were in planes carrying bombs, and enemy planes were shooting at us. Fried food was not a problem."

I didn't understand what I was saying back then. This week, with Veterans Day and my father in mind, I asked those who have served to tell me what civilians don't understand and can't comprehend. These are some of their responses.

"A lot of people don't understand how many of us joined out of a sense of service," said Paul H. Miller jun, "And because we wanted to be part of something bigger. And they don't know how many deadly - or almost deadly - accidents happen, even during peacetime."

"The level of loyalty and trust you have for your comrades doesn't have a direct comparison," said Natasha Wold, who currently serves in the army. "The bonds are similar to marriage but formed differently, because they are formed by shared hardships, dark humour, physical pains, fears and accomplishments. I can recognise those who serve and have served sometimes with just quick eye contact. It gets to a point where you just `know' ... without words and without knowing someone personally. You just know and connect."

Natasha's point about the ineffable "knowing" who served is the idea most deeply echoed by other veterans.

"There's an instant connection and recognition between two strangers when they realise they both served: a sort of sign and countersign," said my former UConn student Sherry, who did not want her last name used.

She served and was in active duty in the air force. "Whether it's at an airport bar, Home Depot checkout line or a traffic stop, it's a quick run-down in 30 seconds. What branch, what rank, where were you stationed, deployed to, and which years? If it's an older veteran, we both realised that while war locations have changed, the military structure and the close friendships we cherish are similar, and that makes us feel bonded."

Navy veteran Debby Morris affirms the "bond among those who served together that is unbreakable ... even if you didn't especially like one another. I was in the navy, which means we had a specific language that's different from each of the other services. We know when someone is pretending to be a veteran, too."

After explaining more about her service, Debby ending with a line that made me catch my breath: "None of us really knows what to do with the phrase, `Thank you for your service,' but we smile, nod and say `You're welcome'."

Other veterans immediately agreed with Debby. The random thanks from strangers, however well-meant, did not make them feel particularly valued.

I felt the way I had when I'd made my chicken-fried-steak comment to my dad: I was struck by my own ignorance, however innocent, because I'd made a habit of saying this to people in uniform.

What about the line was awkward or unnerving? Is this, I asked, as bankrupt a gesture as the generic "The people of such-and-such a tragedy have my thoughts and prayers," which is, in effect, primarily self-congratulatory ("What a generous and considerate person I am!")?

Debby's answer was this: "`Thank you for your service' is a platitude, and underneath, I think for some, there's an air of `Thanks for making sure I didn't have to serve.' Not sure."

It's a brave answer from a brave veteran. We are in their debt.