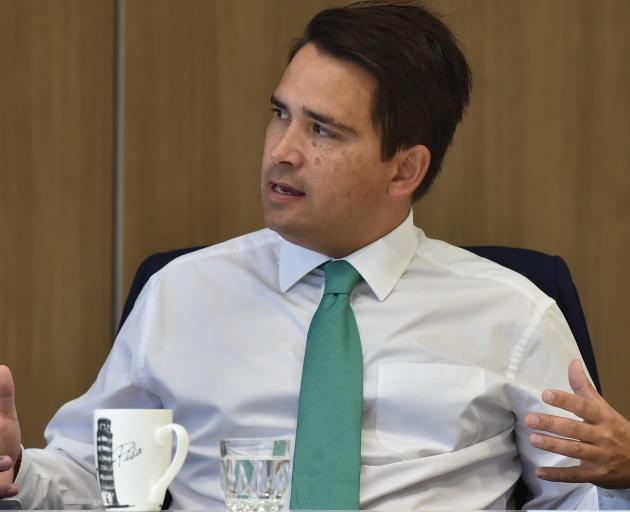 National Party leader Simon Bridges and his Leaning Tower of Pisa coffee cup at Otago Polytechnic on Thursday morning. PHOTO: GREGOR
When you are a politician, even something as mundane as choosing a coffee mug can become accidentally significant.

No doubt National leader Simon Bridges was not looking when he plucked a vessel with a picture of the Leaning Tower of Pisa from a box full of coffee mugs, but it was a visual reminder of his leadership - it has not fallen over, but it does rather look like it might.

Mr Bridges' visit to Otago Polytechnic was the second stop on a busy day of meetings in Dunedin on Thursday.

It was an important one though, with various National MPs - notably Invercargill's Sarah Dowie - aligning themselves with the polytechnics in their struggle to mould Education Minister Chris Hipkins' proposals to reform their sector into a more pleasing shape.

With well-informed local list MP Michael Woodhouse riding shotgun, Mr Bridges was stepped through the polytechnic's alternative proposals, as well as given a rundown of Otago's current position.

It looked very much like Mr Bridges was learning as he went along.

That is fine in part - it does a politician no harm to be seen to be listening.

But nor did Mr Bridges appear ahead of the game and be ready and willing to step in to the vanguard on the issue.

It was a perfectly competent performance, but it is doubtful polytechnic executives would have walked away believing Mr Bridges had any fire in his belly on their behalf.

If there was little excitement upstairs, there was even less down in the foyer when Mr Bridges went looking for some students to talk to.

Although a few people approached him, there was nothing of the swarm of selfie-takers who used to follow John Key on a walkabout, or who flock to Jacinda Ardern now.

In many ways Mr Bridges is on a hiding to nothing - being leader of the opposition is the hardest job in politics.

It's even harder when faced with a popular Prime Minister fronting a first-term Government, and with tales of rivals in behind waiting to take you down.

Mr Bridges' mood would hardly have brightened as he woke to see yet another opinion piece predicting his imminent doom doing the rounds on the internet.

If his mood was a tad bleak in the morning, it had picked up by lunchtime when he did a few laps on an e-scooter around the railway station gardens.

Although most of the spectators were bemused tourists, a few locals took the opportunity to have a word with the man who - as things stand - might one day be prime minister.

Historically, Dunedin is not fertile ground for National, but expect to see Mr Bridges in this neck of the woods more often than you might expect.

To win in 2020, National will need to shore up every bit of the 44.4% of the party vote it received last time and the two Dunedin seats delivered almost 37,000 party votes to National - a performance it will need to match or better.

Mr Bridges also intends not taking National's regional strongholds for granted, so expect to see him in Otago and Southland as well.

If Mr Bridges manages that with the same poise he shows on an e-scooter, that leaning leadership might yet start to look like an easy ride.

The Wanaka A&P show might not seem a hotbed of political activity, but the rural showcase briefly took centre stage in Wednesday's General Debate.

National's David Carter rounded out his speech with a swipe at New Zealand First's Mark Patterson, who apparently had put out a sign in front of his tent at the show which said "Come and tell us what New Zealand First should do about the capital gains tax."

Mr Carter's claim that Mr Patterson's tent had "a queue longer than the Ferris wheels" was probably a rhetorical flourish,

However, his assertion that Mr Patterson's response was to take the sign down and shut up the tent was a touch unfair - it's a long way back to Lawrence after all, and you don't want to get caught in the traffic.

Mr Patterson will bring an even smaller township to prominence next week, when his Gore District Council (Otama Rural Water Supply) Bill returns to the House.

This is a Bill drafted to deal with restrictions imposed by the Local Government Act.

The local council wants to transfer water services to another entity - as it can do under the Act if it is a small water service.

However, to be a small water service it must serve 200 or fewer people, and the Otama scheme serves 223 dwellings - hence the need for this eminently sensible local Bill.

Less sensible was the first-reading debate, when various MPs amused themselves trying to impersonate Southland's distinctive burr, with an accompanying loss of decorum.

Going To The Dogs

Waitaki MP Jacqui Dean was all set to hold forth in Wednesday's committee stages of the Local Government Regulatory Systems Amendment Bill, when she was told to get in behind by deputy speaker Anne Tolley.

"Could I just remind the member we are on part 1," Mrs Tolley said.

"It would be really nice if the member could mention dogs, because we are on the Dog Control Act."