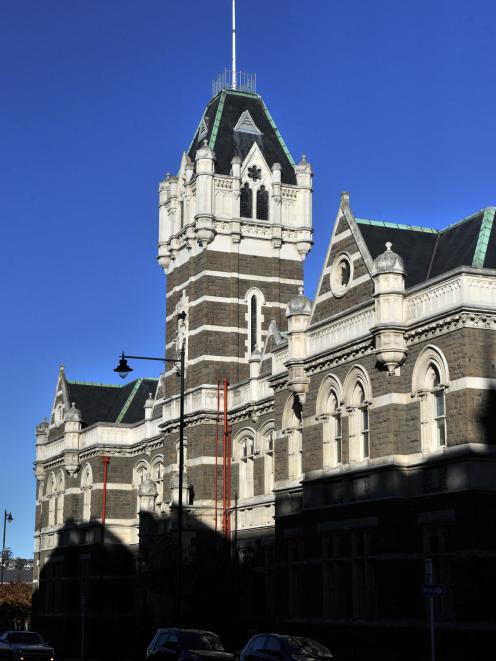 The Dunedin courthouse. Photo by Linda Robertson.
Russell Lund is suspicious of the Ministry of Justice's intention for Dunedin's historic courthouse.

Your  editorial last weekend regarding the fate of the courthouse and your suspicion of the Ministry of Justice's true agenda is sadly, prescient.

It is extremely unlikely there is any will by the ministry at all to strengthen and retain the courthouse.

Lund South completed the restoration of the main courthouse in 2002.

During that project we were party to candid discussions about the history of the courthouse restoration project and how it very nearly did not happen.

The attitude of the courts even back then was that they weren't getting any extra funding for restoration of the courthouse.

They viewed the historical and heritage significance of the building as someone else's problem.

The courts had negotiations with the owners of an office building in the CBD, and very nearly signed a lease to put the courts there.

It was only due to the hectoring of certain persons in the design team and a sympathetic official within the department that saw the project proceed, albeit very reluctantly, and with ongoing demands throughout the project to cut costs.

Of course the pressures on all government spending in the current Joycean environment are far worse than those benign days of the early 2000s.

About $11 million was spent on renovation and extension of the courthouse in a project completed in 2003.

The department has now spent or will spend more than $6 million on a temporary facility. That suggests this is not a temporary fix.

We can be sure about this because we were also involved in the construction of the temporary courts in the old BNZ building in 2001.

That temporary facility that served very satisfactorily (apart from an issue with insufficient acoustic separation in the jury room that was easily fixed) and cost about 10%, just one 10th of the current expenditure on the new temporary facility.

The strategy employed by the department is quite obvious.

They have commissioned an national engineering consultancy that is not known for creative or economic solutions.

The firm is also well known for being unreceptive to alternative design proposals, its attitude being, ''this is our project, we are going to do it our way''.

Local engineers familiar with the building are convinced the scope and the cost of the work required would be dramatically less than the current proposal.

We have seen this scenario play out in the case of the Oamaru courthouse, where an alternative proposal at an estimated cost of one-third of the courts engineers' estimate still was not enough to convince the courts to stay in the building.

Surely, if the building can be strengthened at reasonable cost it is worth doing?

The answer is that this department, like others, simply sees old buildings as a money pit for ongoing repairs and maintenance and its budgets are blind to the wider benefits to the community of retaining heritage.

Russell Lund, from Macandrew Bay, is the owner of Lund South