Buildings were expected to last 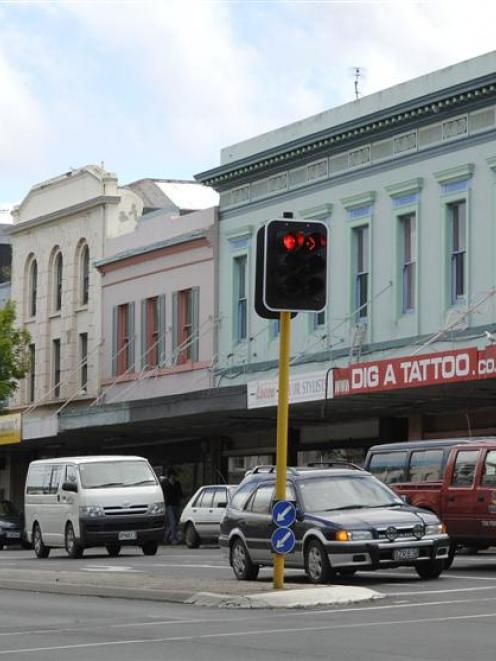 Buildings in Princes St, Dunedin, near the intersection with Stafford St. Photo by Linda Robertson.
Do Victorian buildings have a use-by date conveniently just expired?

It would be significant for Dunedin if they did.

Some people are seriously asserting this.

Simon Ford, the lawyer for the developer who wants to demolish the buildings and their protected facades at 372 to 392 Princes St and 11 Stafford St claimed this in his written reply to the committee deciding the proposal.

The issue is alive so it matters.

He wrote: "Currently the four buildings on Princes St and the building on Stafford St are in various states of disrepair.

They have reached this level of disrepair over a significant period of time.

This state of disrepair is not unexpected as these buildings were not designed to last this long and have outlived their life expectancy."

Really? The buildings are of varying ages. 392 Princes St, formerly Roganos restaurant, was built probably in the 1870s.

The building at 372 to 378 was certainly there by 1888 and its northernmost part is older.

They are all Victorian survivors.

These buildings are made of unreinforced brick, sit on stone foundations and originally had slate roofs, long replaced with corrugated iron.

How long were they expected to last?This is an old form of construction, although slate roofs of the sort we call that really only got going in the 18th century - the 1700s.

The thinstone shingles mostly come from quarries in Wales.

Before that, other stone shingles were used, or ceramic tiles.

The question is, how long did their designers and builders expect them to endure? To many of those people, the question would seem rather strange - or patently ridiculous.

The Colosseum in Rome, completed in AD80, is essentially of the same construction.

Unlike the Dunedin buildings, its exterior was faced in stone, but its core was brick and mortar.

It's a ruin today but it continued to be used for contests, despite fire and earthquake damage, until the sixth century, the 500s.

After that, it was re-used but also quarried - people took away its brick and stone - which is how it became a ruin.

Until people lost interest, it was functional for 400 years.

Like the Dunedin buildings, it was chiefly unreinforced brickwork without an exterior cladding. (It had a problem they don't of sitting on a tidal sand bank which needed extensive piling.) It, too, was used as a quarry - surreptitiously - with the result it collapsed in 1902.

What you see today is a replica completed in 1912.

If it was not for the quarrying, the old building would have survived.

These are very famous examples.

But in Europe there are tens of thousands of unreinforced brick buildings which have existed for centuries, much longer than the 150 years which the oldest of the buildings being considered for demolition here are still shy of.

So how long did the designers of our buildings expect them to last? If you look at our records from the early 1860s, you see some concern about building longevity - centred on destruction by fire.

The Daily Telegraph published quite a bit about it, and also expressed what is really an aesthetic concern.

After the gold rushes began in 1861, there was a lot of building, some of it masonry, like the buildings on Princes and Stafford Sts, much of it in timber.

There were fires which spread rapidly among the timber buildings.

That is what gave Dunedin its relatively substantial appearance, noted by visitors like Anthony Trollope, by the 1870s.

There was also a feeling, a prejudice, evident in the papers, that building in masonry was inherently superior to using a flimsy material like timber.

It is only a prejudice because timber buildings can be quite as attractive as masonry ones, are a special characteristic of New Zealand architecture, and though relatively maintenance intensive, compared to masonry ones, can also be made to last.

So how long did the designers of the buildings at Princes St and Stafford St expect them to stay around? Barring accidents natural and human, with proper maintenance, indefinitely.

That was the standard expectation.

Our Colosseum, the new stadium, is designed for a life of 50 years.

William Mason would have wondered about that.

People would not have thought that was good then.

Mr Ford is guilty of projection.

His assertion is untrue.

The buildings are not past their life expectancy.

• Peter Entwisle is a Dunedin curator, historian and writer.