All buses now have huge front destination lettering to allow visually-impaired people to see where their buses are heading. PHOTO: ODT FILES
Access for all on public transport is celebrated around the world on Rosa Parks Day. Dunedin bus enthusiast and advocate Peter Dowden takes stock of how accessible our city is for bus users. 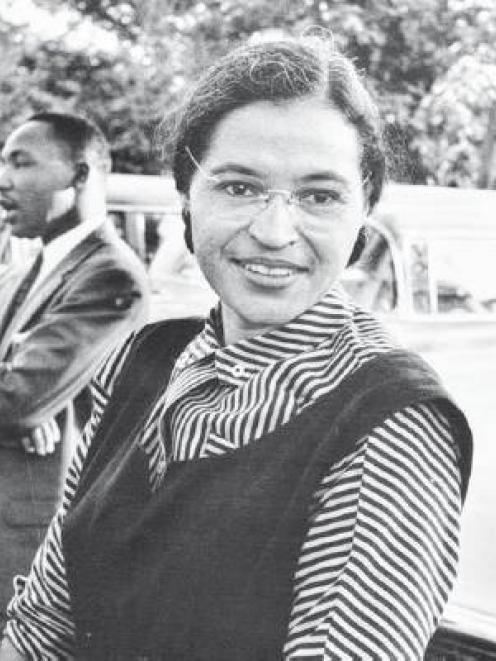 Rosa Parks with Dr Martin Luther King jun in 1955. PHOTO: US NATIONAL ARCHIVES
Many have stood up for human rights; Rosa Parks famously sat down for hers, on a bus in Montgomery, Alabama on December 1, 1955. Four years ago I called out our Otago Regional and Dunedin City Councils for their poor record on making buses available to all (ODT, Dec 1, 2016), so today seems a good time to see whether things have improved.

In 2016, I criticised Dunedin City Council’s broken or missing kerbs, bus stops that are too small, and proliferation of poles, signs and litter bins alongside bus stops, all of which make boarding or alighting a bus harder for our less agile folk.

Since then, our new central bus hub has opened, with world-class tyre-friendly bus kerbs, allowing an easy step or gently-sloped ramp on and off the bus. Similar high kerbs have been installed in upper Rattray St and, in just the past week, in St Clair. The council has drawn up a list of the worst stops to be improved and is working through them gradually. (This will take some time: even at one a week, it would take 20 years to fix all of Dunedin’s thousand-odd bus stops).

Given the effort to improve bus stops, it is disappointing to see the city council install many brand-new stops along our expensive harbour shared path that are inaccessible to wheelchair and pram users due to having no kerbs. This can be remedied by installing simple ramped concrete pads at each stop, which might even add to the enjoyment of the path for other users such as skateboarders.

So there’s both a step forward and a step back for physical accessibility. Happily, effort seems to be ramping up, as the concept plans for the next bit of harbour path show high kerbs at the proposed stops.

What about where there are no bus stops at all? Every so often, a bus route gets changed to run along new streets. Provision for bus stops along it is left ‘‘pending’’. This problem drags on over years. Each council blames the other.

Almost anyone is allowed to veto a bus stop: a motorist, a business owner or an adjacent resident will have their views considered ahead of bus users. The result: a bus drives through vast swathes of St Kilda every 15 minutes without stopping, unless the passenger is on friendly terms with the driver.

In Mosgiel, in the city council’s latest traffic experiment, along one 450m length of street, remarkably the only suitable place to install a temporary crossing point with planter boxes and yellow bollards was the local bus stop, which was summarily deleted in the name of road safety; oddly, given that buses are the safest known way of travelling through an urban area. This removal was in violation of the current Regional Public Transport Plan which specifies bus stop spacing, among other things.

Decision-making such as described denies mobility to those who have difficulty walking. This does not reflect well on our city, showing a lack of care and kindness.

Accessibility also includes visibility. All buses now have huge front destination lettering to allow visually-impaired folk to see where their buses are heading. This effort is let down by the tiniest of print on bus timetables mounted on bus stop poles, which often covers only the top quarter of the page available, leaving the rest blank. Posted timetables get smaller each time they are replaced: once again, this betokens a lack of care for users on the part of those responsible for design.

A few years ago, our regional council was criticised for making bus travel discounts for people with disabilities hard to obtain: they had to make their way uphill to the council office, far from a bus route. Well, they certainly solved that problem.

The regional council boosted fares for disabled passengers by 16% while keeping others the same or reducing them. Now people with disabilities pay the same fare as everyone else. Job done?

Here in New Zealand, all grounds for discrimination listed in our Human Rights Act are held equally unlawful. We can’t congratulate ourselves simply because Rosa Parks being told to stand down the back of the bus on grounds of skin colour would never happen here. Racism isn’t the ‘‘naughtiest’’ form of discrimination, it is just one form of many. Our bus planners need to take a hard look at the ways they make life more difficult for certain sectors of our community.

hey...the good the bad and the ugly...
i moved here 10+ years ago and relied on the buses.
it worked then, aside to late buses..and no real confidence.. it worked.
when the new bus hub got put in and timetables...
it was like 110% improve.
i worked it out, it use to be cheaper to run a 5L V8 on a 2 bus zone run
into town and back...
and was like what am i doing?
now can get to port chalmers, mosgiel or the likes for $2
the new hub and all the new is good and of course not everyone will be happy but hey thats life.
the only negative to is from moir is, there really needs to be shelters at each bus stop.
i use the bus down from my house...but if it raining... i use my car...
massive improvements from first experience with