New Zealand could do well in an Asian world, writes Pramuk Perera.

Swedish statistician Hans Rosling once said: ‘‘The world will be normal again; it will be an Asian world, as it always was, except for these last thousand years. They are working like hell to make that happen, whereas we are consuming like hell.''

New Zealand may do well in the Asian world.

Our country is in the Pacific and it is much closer to Asia, and Maori have ancestral links to Asia.

From early days, the trade among Britain, India, China and New Zealand influenced our society and culture.

After Britain's focus shifted from the Commonwealth to the EU, New Zealand recovered its economic prosperity by building strong networks in Asia.

In terms of New Zealand national population, Asian-born people almost doubled in number from 2001 to 2013.

These people might help New Zealand to gain a strong position in the Asian world.

The rising influence of China in the region and the United States' strategic interest in maintaining its power in Asia will definitely make Asia an interesting region.

The best way to rule the region is to be a part of the region, so the US will possibly redefine its boundaries to be a more Asian nation.

Americans, Chinese and most likely Indians will build their strategies to dominate this region.

None of these three countries appreciate being ruled as a colony and have bitter experiences of that era.

New Zealand's attempt to change its national flag to highlight its sovereignty and independence is probably a strategic policy level decision to recognising this upcoming Asian world controlled by anti-colonialists.

Furthermore, New Zealand's role in building strong links with Asian countries unveils a policy towards adjusting the country to the Asian world.

The Trans Pacific Partnership is just a trade agreement in many people's eyes.

But as US Defence Secretary Ash Carter stated: ‘‘Passing TPP is as important to me as another aircraft carrier ... TPP would deepen our alliances and partnerships abroad and underscore our lasting commitment to the Asia-Pacific''; trade is probably not the main goal of this agreement.

The TPP is instead a strategic policy decision to prepare the country for the future.

It is an attempt to build a strong framework of international relations, trade and business.

It is a move to challenge the rising Asian powerhouses such as China and India to change their policies to play a fair game in the Asian world.

No country in the Asian world will be able to dominate the world by military strength.

It is the country that knows how to maintain relations, build trade and expand business that will dominate.

The United States understands this and became the main driver of the TPP in order to use it as a strategic tool in Asia.

China also understands very well the significance of relations, trade and business and it is trying hard to build its own networks.

India seems to be behind in this area, but will probably use its large population living overseas as a tool to influence countries to build networks.

In terms of business, it does not matter who owns the firms that operate in New Zealand.

Making racist comments against Chinese investments is unlikely to do any good for the country.

Entering other countries and investing in those countries is a recognised business model that companies follow.

There is no reason why the Chinese should not be able to do the same.

New Zealand's international business policy might focus on getting the job done by others while the country reaps the prosperity.

The policy might focus on branding this nation in a way so that none of the Asian powerhouses can ignore New Zealand when it comes to business.

It is a challenge for this distant island nation with a small population.

However, Singapore has so far been successful in this regard and, while it is small, it is very important to global business.

New Zealand international business policy might focus on creating business standards and showcasing the value of other nations adapting those standards for their own benefit.

That means New Zealand would be setting the rules of the game by inventing new business processes, similar to the way the Japanese did after World War II.

●Pramuk Perera is the first doctoral researcher in international business at the University of Otago. He has experience with global organisations in Asia, Europe, the Middle East and now the Pacific. 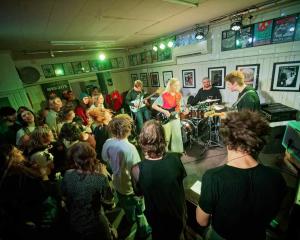 We need to protect the life blood of our music scenes