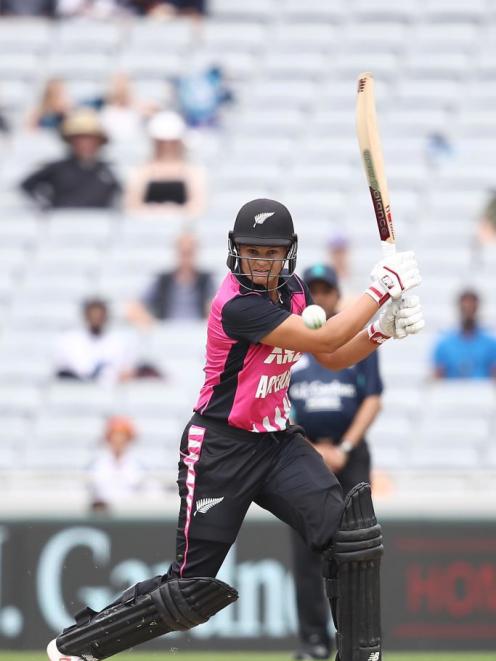 Suzie Bates in action for the New Zealand White Ferns. New Zealand Cricket is held up as a leading light for promotion of women in sport. Photo: Getty Images
I read about a new director appointed to a national sports board - the new director had a stellar CV, bringing strong financial skills and fantastic life experience to the role.

In my mind, the right person for the job. Then, for some reason, I made the fatal mistake of reading the social media comments relating to the appointment.

You guessed it, she made the mistake of being a female - but wait there's more - she was also Maori! How could it be anything but tokenism - how could a Maori female possibly be the right person for the board?

My delight turned to despair. I only had myself to blame for wading into the comments section. If I hadn't done so, I could have stayed in my own bubble of progress. Entering the comments section means you are guaranteed to get a good slam of public opinion, and it can be pretty ugly out there.

Newsflash for the doubters: women make up 49.6% of the world's population, we enjoy sport for ourselves, both competitively and socially, we enjoy watching sport and we also make a significant number of decisions as to what sports our daughters play, and wait for it, our sons, too!

Ignore us at your peril, sports bodies. If you want to see the impact of ignoring women in sport, read a comprehensive 2016 review by Sarah Beaman on women's cricket in New Zealand. Women's cricket was close to extinction in terms of player numbers, but also in terms of female interest in the game. If Mum thinks that watching cricket is akin to watching paint dry, as has been described to me by mothers, the likelihood of little Johnny playing, let alone Joanna, is pretty slim.

In response, New Zealand Cricket is transforming - and fast. Thank goodness. It needed to and it is now held up as a leading light for other sports.

Sport New Zealand recently set a target for all sports organisations to have a minimum of 40% of each gender on all boards - national, regional and local - by 2021. My read on that, sports bodies - get your act together or your funding might be affected.

For those who argue that such mandates lead to tokenism at best and no-one wants to watch women's sport anyway - think again. Have a look across the Ditch at what is happening in Australian sport.

Philanthropist Susan Alberti has revolutionised the rise of women playing and following AFL - it is an extraordinary story of passion and drive. The women's game is attracting crowds of more than 50,000, forcing them to move to bigger grounds. So, too, the Australian women's cricket league can boast skyrocketing viewership and engagement, and my own children are able to name more Australian female cricketers than New Zealand female cricketers. People, both male and female, will watch females play sport, especially when they are given quality publicity and coverage - and it has nothing to do with the length of their skirts - neither AFL players nor cricketers wear skirts.

Elite or national level sport is the flagship for any code. How we treat females at that level is symbolic of how we view females in sport at the community level: players, administrators, officials and supporters. We cannot change one without changing the other.

All sports are competing for player numbers, for spectators, and for our time. If, as a mum, I am treated as a second-class citizen when I take my child to their first sports game, I will walk away and find another sport - there are plenty available.

It is not about tokenism: how can accounting for 49.6% of the population and multiple ethnicities be considered tokenism? We may have to change how we do things, it may require effort, but speak to anyone in involved in national leadership in cricket circles and they will tell you the changes are worth making.

And if you are involved in sport and roll your eyes while reading this, good luck with the future of your sport - it may not be a fruitful one.

-Anna Campbell is managing director of AbacusBio Ltd, a Dunedin-based agri-technology company. She is also a director on the board of Otago Cricket.