Citizens in a dreamworld 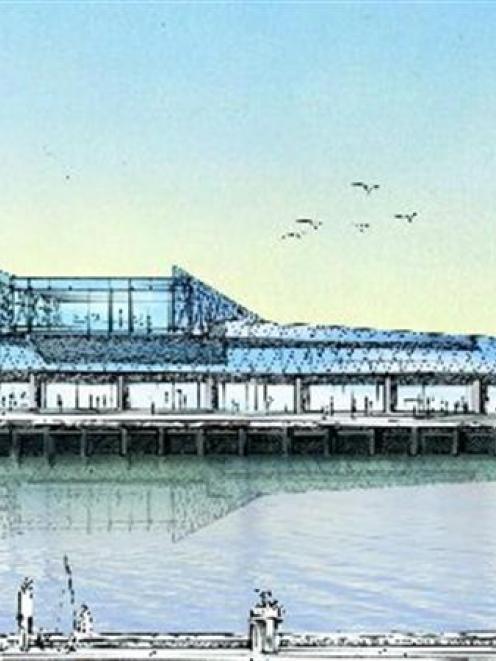 Artists' impression of the planned Otago Regional Council waterfront office building.
Do the artists who create the snazzy "impressions" of future construction projects live in the same Dunedin as the rest of us? Chris Skellett doubts it.

Ratepayers have recently been swimming in a sea of futuristic visions for our city.

Firstly the Forsyth Barr Stadium, then the proposed ORC building, and now the Town Hall Cube.

Having carefully considered the dubious architectural merits of each, I now find myself curiously drawn to the behaviour of those tiny little stick figures that can be seen inhabiting this brave new world.

It all started with the artist's impression of the proposed new Otago Regional Council waterfront building.

It looked stunningly modern and sleek. It could have been San Diego or Vancouver.

It had style and sophistication. It made me want to stroll along its classy wharf.

I could just see myself sitting under a sun umbrella at one of those boulevard cafes, sipping a latte and watching the beautiful people strolling by.

However, as I studied these computer-generated people, I realised none of them seemed to be actually going in or out of the building.

Surely we should be expecting a greater sense of bustle, purpose, and direction around the region's administrative hub?

I then pulled out the original artist's impressions of the stadium: same thing.

Strangely, the neighbouring Leith Stream was portrayed as a tranquil blue lake, with romantic couples strolling along a tree-lined promenade.

It was an equally seductive scene, but somehow it didn't seem quite right.

Whatever has happened to all those lovestruck fools?

Why are they all wandering so aimlessly alongside the Leith, headed for the petrochemical supply depot behind the recycling station?

Don't they realise that it's a dead end up there?Anyone familiar with the Leith near its mouth will know it resembles a large open drain.

It is an ugly, concrete embarrassment to anyone with an aesthetic sensibility.

Are they genuinely going to beautify the Leith as part of the stadium plans?

It seems in the future, people will stroll casually around town, lightly dressed and often with arms romantically entwined.

Sometimes, they will just stand and gaze contentedly at each other. Their evident lack of purpose or sense of direction becomes alarming once you stop and think about it.

It seems clear there must be subtle plans to put something in the water.

At the end of the day, these impressions are just that. They are simply impressions.

But do not be fooled by them. The weather will not be any warmer, and the Leith will not be turning azure blue.

And howling southerlies will continue to whip fiercely across any open public space in town.

Deep down, we all know this is true.

When the final plans for the new site of the ORC are eventually released, we will all be looking at the artist's impressions with a renewed curiosity.

Probably, we will again see young, smartly dressed figures promenading, apparently untroubled by the underlying hardships of their ratepayer burden.

If there are no snotty kids, vagrants or old people in overcoats with shopping bags on show, then we truly will have confirmation of the city fathers' future vision for us all. I can see the attraction of all this to our civic leaders, especially if ratepayers succumb to the brainless lives those futuristic stick figures apparently lead.

No protests, no opposition, no anger, no contrary opinion.

There is a lingering suspicion that one day, we citizens of Dunedin will all be floating about in a very dreamy dream indeed.

- Chris Skellett is a Warrington writer.