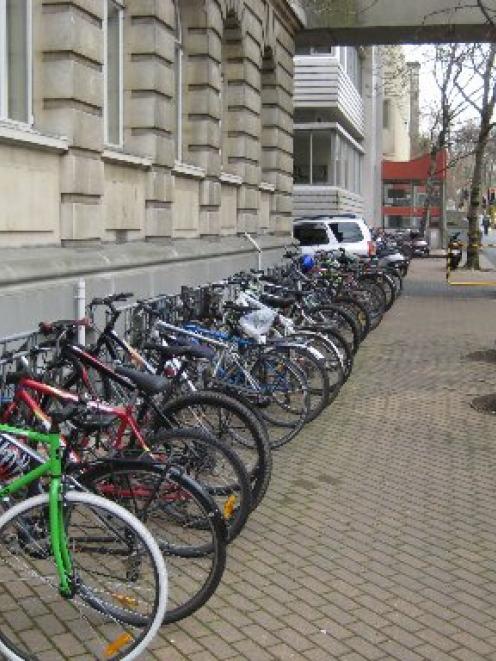 Parked cycles outside the School of Medicine in Great King St, Dunedin. Photo supplied.
Robert Thompson, of Spokes Dunedin, says Dunedin's transportation system is being held hostage and unbalanced by a minority voice that claims to represent all business interests.

Some people's vision of Dunedin is as a sewer through which to flush freight and traffic as quickly as possible.

The recent editorial ''Cars, trucks, and bikes in Dunedin'' (19.9.13) claims ''every time a truck has to stop or every failure to improve the road to the port disadvantages business''.

The editorial's implication seems to be that Dunedin gets in the way of trucks going to the port and that the author would be much happier if Dunedin did not exist.

Such extremist views are anti-Dunedin, anti-people, and ultimately, anti-business.

The reality is that while port traffic plays a major role in supporting Otago's primary production sector - agriculture, forestry, and mining - it is not the only sector of Dunedin's economy.

According to the latest Business and Economic Research Ltd report, primary production accounts for only 3.5% of Dunedin's GDP, and only 2.7% of its jobs.

Social services - including health services, education and research, and tourism - is the largest single sector of Dunedin's economy, accounting for 26.5% of GDP and 33% of jobs.

The inclusion of the business services and retail sectors rounds out more than 60% of GDP and 70% of jobs. None of these sectors is directly reliant on port traffic.

Dunedin's livelihood depends crucially on recognising that Dunedin cannot be just a rural service town, and it is vital to encourage growth in other sectors.

High value-adding economic sectors rely heavily on their human capital for creative solutions in a competitive business environment, and recognise the importance of the human experience not only in their business model but for their employees.

The next generation of entrepreneurs and employees can live and work almost anywhere in the world, and are choosing locations based on quality of life expectations.

Savvy cities know this - in December 2012 the mayor of Chicago announced plans to build more cycleways in an attempt to lure workers from Seattle. This is the new reality in which Dunedin must compete.

At least one similar example already exists in Dunedin: attracting and retaining world-class teaching and research staff at the university brings more government funding, enhances its global reputation, and attracts high quality students from around the world.

Packed bike racks outside the medical school and on the main university and polytechnic campuses indicate hundreds of staff and students cycle each day. The last person needlessly killed while cycling to the university was a staff member. The next time it may be a student.

How will the University and the city council explain to that student's parents that Dunedin had the opportunity to make it safe for their child to get to uni, but decided that a few extra car parks were more important, and that we couldn't possibly ask commuters to park in off-street lots or multi-level garages?

Cycling infrastructure is like a Dickensian character, being fed a starvation ration of table scraps, who when asks ''please sir, may I have some more?'' is said to have an ''anti-car agenda'' and is perpetrating ''an assault on motorists''.

But there is enough to go around. The parking loss issue is one that can be resolved with a bit of thought and planning.

The existing cycle lanes have not slowed traffic and have actually improved traffic flow in some places.

The State Highway 88 shared path is moving cyclists off the road to Port Chalmers, and the proposed separated cycleways on SH1 will be a game-changer.

In future, people will have the option to to drive or cycle and may choose a different option on a different day. A healthy economy is reliant on success across multiple sectors.

Enabling and encouraging economic growth requires recognition of the contribution and interdependence of different sectors of the economy and a careful balance of transportation needs.

Some people's vision for Dunedin is as one of the best cities in the world, but right now Dunedin's transportation system is being held hostage and unbalanced by a minority voice that claims to represent all business interests.

Freeing ourselves from this hostage situation and re-balancing the transportation system will give Dunedin a fighting chance at the future.