Close to signing,TPPA can be stopped 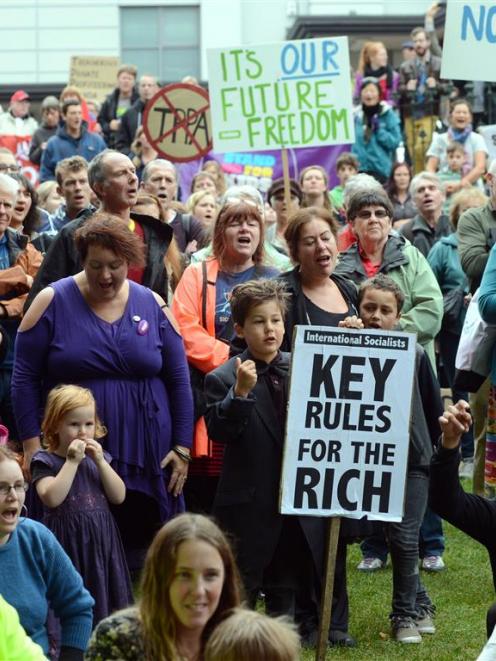 The TPPA text was finalised in Atlanta last October and will be signed here in Auckland on February 4.

But there's lots more to go before it becomes reality. Parliaments, congresses and assorted governing bodies of the 12 signatory countries (NZ, Australia, US, Japan, Canada, Mexico, Chile, Peru, Brunei, Singapore, Malaysia and Vietnam) still have to ratify the agreement made by their trade ministers.

That could take up to two years.

There is still time to stop the TPPA.

The text was released in December. Despite assurances from officialdom, the conclusion is the TPPA is as bad as, or worse than, opponents feared.

For example, pharmaceutical companies' monopolies for biologic medicines, the up-and-coming treatment for diseases like cancer and diabetes, will increase from five to eight years, adding tens of millions of dollars to Pharmac's bill.

Big companies will have more opportunities to challenge Pharmac's decisions and administration costs will increase. Who will pay?

The TPPA will undermine our ability to determine our own laws; laws which shape the kind of society we want.

But we know what to do. We've done it before and we can do it again.

In the 1980s, Kiwis in small boats faced up to US warships in our harbours, whole towns and cities declared themselves nuclear-free, and people all around New Zealand built a movement so big it became political suicide for politicians to oppose it.

By 1987, when Prime Minister David Lange looked like he might wiggle out of his nuclear-free stance after three years of bullying from big brothers Australia and the US, Kiwis held him to his word for a second term.

Even the Nats had to swallow the nuclear-free ‘‘dead rat'' to get elected in 1990.

The Nats bent again to the will of the people in 2003. Leader Don Brash said our anti-nuclear policy would be ‘‘gone by lunchtime'' if he was prime minister and he was gone before breakfast.

Labour Prime Minister Norman Kirk described New Zealand in the 1970s as ‘‘a principled small nation that could stand up for its beliefs on the world stage''.

Mr Kirk wasn't around to see us become nuclear-free a decade later, and he won't be here to witness the current Government's signing of the Trans Pacific Partnership Agreement (TPPA) on February 4.

Mr Kirk would not recognise the 6000-page TPPA as a trade deal because only a few of the 30 chapters resemble what trade used to mean.

US President Barack Obama has dubbed it a ‘‘21st-century trade agreement''.

What is a 21st-century agreement?

From all accounts it appears to be by corporations for corporations, designed to help them get special deals they wouldn't otherwise be able to get because countries' democratic laws and protections get in the way of their profits.

US corporate lawyers had a big hand in writing the TPPA and the ISDS (Investor State Dispute Settlement) chapter is a way they can make sure no country's citizens impede their ability to make a buck. If it does, they'll sue.

Egypt did in 2012 and via a similar ISDS clause French multinational Veolia, which owns some of Auckland's buses and is currently vying for some of Christchurch's infrastructure services, sued the Egyptian Government for doing so (it raised the minimum monthly wage for salaried workers from $NZ88 to $NZ155).

Want to deal with the effects of climate change? Under a similar ISDS clause in the North American Free Trade Agreement, Canadian energy giant TransCanada is suing US taxpayers for scrapping the Keystone XL pipeline.

The pipeline was stopped from carrying tar sands from Alberta to the Gulf of Mexico, thanks to a massive grassroots climate campaign, thus stopping emissions from the dirtiest fossil fuel on the planet ending up in our atmosphere.

Judging by the numbers at marches and rallies around New Zealand in the past year, many of us are very worried about the TPPA.

We don't want it. We've learnt about it thanks, in large part, to Auckland University law professor Jane Kelsey.

She is about to tour New Zealand again with US counterpart Lori Wallach, director of Public Citizen's Global Trade Watch.

They will be in Dunedin on Friday, January 29, speaking at Burns Hall, First Church at 7pm. There is time to stop the TPPA. We've done it before. We know what to do.

●Rosemary Penwarden, of Waitati, is a spokeswoman for Oil Free Otago.