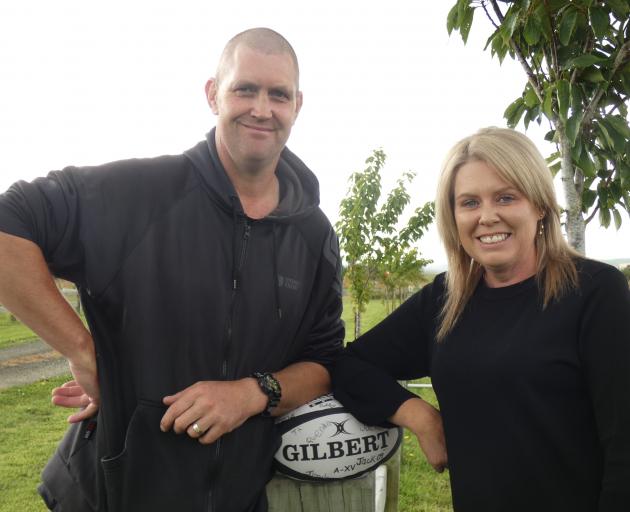 The tragic case of Blair Vining, pictured here with his wife Melissa, has highlighted the problems with cancer treatment in New Zealand. Photo: ODT files
Cancer care does not need more bureaucracy, but more people dealing with the direct needs of patients, writes   Gil Barbezat.

The recent TVNZ programme on cancer care left me shocked, horrified and greatly saddened. I realised afresh how the current situation reflects the lack of appropriate action to well-defined problems over at least 25 years.

The current politicisation of the issues is unhelpful.

A previous minister of health told a medical audience at our medical school: ``You lot can talk until you are blue in the face; you represent vested interests. When the people talk, we are politicians, we will listen.''

I think the people have been speaking for a long time, but now demands are more clearly defined. Are politicians and bureaucrats really listening?

Colorectal cancer (CRC) is an excellent example of a condition capable of illustrating issues and shortcomings in the system. Many cases are entirely preventable with adequate screening programmes. Early cases are curable using well-defined treatment protocols.

Importantly, it is the second-most common cancer in our country, with the Southern DHB region having the highest incidence. The tragic case of Blair Vining crystallises many of the problems. Why did he have an unacceptably long wait time before being seen by suitable staff?

There is simply not enough staff to meet population requirements. The existing Dunedin Hospital was planned in the 1970s, before colonoscopy was available in Otago.

Demand for colonoscopy has grown exponentially since then, rapidly outstripping the capacity of the facility and the availability of staff to provide the services. The Dunedin facility was officially proclaimed ``not fit for purpose'' in 1994.

Repeated attempts were then made by many of us to remedy this situation. A comprehensive Gastrointestinal Diseases Centre was planned to address the impasse but failed to eventuate in 2013 because of ``lack of funds''. At that time the rate of expenditure on health was growing more slowly than growth in GDP; these health needs were not given appropriate priority.

A new facility was eventually opened in Dunedin last year, but, as we read in the ODT, is beset with problems among staff in the Southern DHB region.

The NZ Society of Gastroenterology has recently conducted workforce surveys, and colonoscopists are in desperately short supply countrywide. Without trained staff, the management of symptomatic patients and the demands created by screening exceed available resources. Bottlenecks trap patients like Blair Vining, with surgical and oncology services also being swamped.

Colonoscopy is a challenging procedure requiring clinical experience and closely supervised expert training. Importing trained people is costly and demanding of resources. Nurse endoscopists are an option, but they also require training. CT colonography is helpful, but limited in scope and also in resources. We are still so far behind that tragedies recounted in the TVNZ programme will continue until staff and facilities match the clinical need.

The current New Zealand CRC screening programme is welcome, and better than nothing, but has been compromised by resource constraints.

The cut-off level of occult blood testing and reduced age range currently used in the programme were changed from those used in the pilot programme in Waitemata. This compromise was designed specifically to reduce numbers qualifying for colonoscopy, as there are simply not enough staff to deal with a national programme at the original levels. On both these scores, we are denying a quantifiable number of patients the chance to avoid CRC and an untimely death.

Increasing Pharmac spending for cancer drugs would be appreciated by many, and is important in some selected circumstances. However, this is very much an ambulance at the bottom of the cliff. It very rarely saves lives, but may offer much appreciated prolongation of life for some.

Politically, it is much more appealing to give expensive drugs to dying patients than to invest in training people who will be in a position to save many, many more lives in three to five years' time.

Lives saved per dollar spent on currently available drugs are nowhere near what can be achieved with CRC screening, or even timely treatment of symptomatic patients.

Last but not least, a Cancer Agency in whatever form envisaged could be a good or bad idea.

Good if it ensures management priorities are prescribed based on independent, professional, research-guided advice and adequate funding is provided for recommended action.

Bad if it is just another ``governing body'' which siphons off funds to bureaucrats without primarily addressing the logical progression of needs, but follows political or parochial demands.

We do not need more bureaucracy, but more people dealing with the direct needs of patients. Short-term Band-Aids are simply wasteful.

Management of CRC will remain inadequate as long as demands for adequate staffing and facilities are not given the priority they deserve.

The public has joined the profession in demanding better attention to CRC management. Effective action should be seen where it is needed most and reach beyond party political games.

-Gil Barbezat is an emeritus professor of medicine and was previously head of the gastroenterology service.