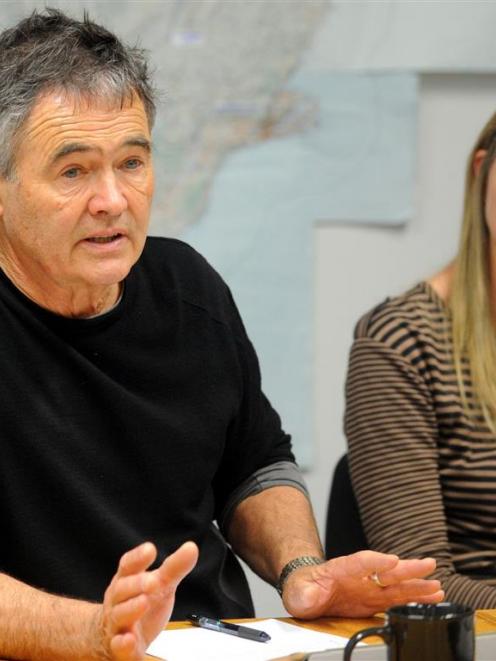 It has been a year since the June 2015 flooding which affected several parts of the city, but particularly South Dunedin.

Naturally, people in the community are very concerned about the risks facing the area.

There are two distinct sets of risks for South Dunedin in the future.

The first threat is flooding caused by extreme rain events like the one we had in June 2015.

In short, more rain fell than the stormwater system could possibly cope with, even if it had been working optimally.

Several factors made things even worse.

The Portobello Pumping Station screens blocked, which meant the pumps worked below capacity.

The high level of groundwater and an increased amount of hard surfaces in the area compared to when the system was installed in the 1960s prevented some rain from soaking into the ground.

That mean meant more water had to be dealt with by the stormwater system.

That meant even more water for the system to cope with.

Mud tanks were blocked as well.

The council has done, is doing, and will do a number of things to ensure the stormwater drainage system in South Dunedin works as well as it possibly can.

We are spending some $650,000 addressing identified issues.

All of South Dunedin's mud tanks have been thoroughly cleaned and a new screen which is easier to clean in high flows will soon be installed at the pumping station.

Additional alarms are also being installed to give earlier warning if pump screens are becoming blocked.

We are also looking at all other possible ways we might be able to improve the current stormwater drainage system.

That will be necessary because more extreme and frequent rain events are predicted resulting from changing climate patterns and we know that the current system cannot cope with them.

However, the current system can't simply be upgraded overnight.

Any significant upgrades would potentially cost tens of millions of dollars.

The second threat is inundation from rising groundwater - the water found underground in the cracks and spaces in soil, sand and rock.

The Parliamentary Commissioner for the Environment's report on sea level rise released late last year told us that sea levels will continue to rise.

Over time, this will force up groundwater in low-lying areas such as South Dunedin, exacerbating existing problems such as rainwater not being able to soak into the ground and surface ponding in some areas even without rainfall.

Stormwater drains are not designed to drain groundwater, so even if we enhanced our stormwater system to deal with flooding, it would not fix the groundwater problem.

Again, there are no quick and easy answers to deal with this issue.

We are working with the Otago Regional Council to understand what is happening with groundwater.

Various studies are measuring the influence of tides, sea level and rainfall on the level of groundwater, and where that influence is felt worst.

We don't have all the facts yet, but we hope to have a clearer picture within a few months.

However, in the face of known changes to sea and groundwater levels, no-one can be confident or give assurances that it will remain business as usual in South Dunedin, and indeed in other parts of Dunedin and New Zealand in the future.

We have known for some time that we will have to take some significant action in South Dunedin.

When the council has a clear idea of the sea and ground processes that are unfolding, timeframes around them and the options that might be available to deal with the results of those, then we will need a major discussion with the Dunedin community about those options and about what levels of protection and infrastructure service are possible, what the community wants and what the community can afford.

The council would be irresponsible if it blithely assured the community everything will remain the same as it has been for 100 years.

We know it won't.

What the council will do is ascertain the facts as best we can, then discuss with the community, in light of those, what is the best course to deal with them.

The community will be informed, engaged and involved in exploring all possible options and developing a long-term strategy.

This will be a careful and considered process - it is more important to do it well than to rush and get it wrong.

What I can assure the community is that the wellbeing of South Dunedin residents and businesses is absolutely top priority.