Danger view of 'experts' will prevail 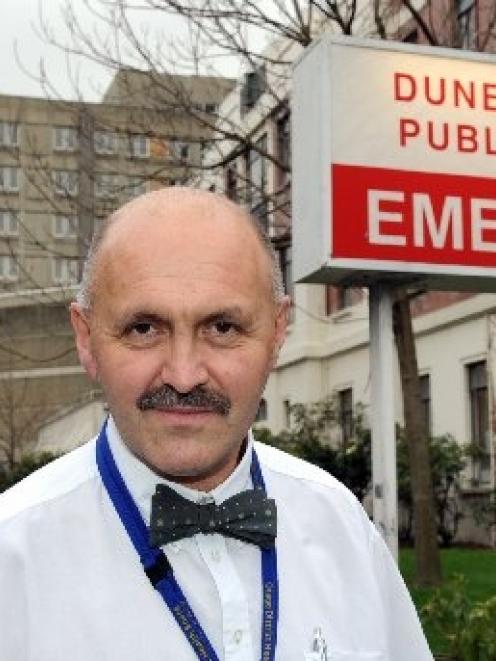 Dunedin surgeon Mike Hunter believes the neurosurgery issue may be settled by a political arm wrestle. Photo by Stephen Jaquiery.
Dunedin surgeon Mike Hunter, in the first of a six-part series, explains what he believes underlies the threat to neurosurgery in Dunedin. Mr Hunter is clinical leader in intensive care at Dunedin Hospital and responsible for rescue helicopter medical retrieval.

The central issue, in my opinion, boils down to a collision between two major competing priorities: the need for ready access to services, the key concern of the citizens of southern region (Otago and Southland), versus the desire to have a larger pool of neurosurgeons in one place, the priority of the Christchurch neurosurgeons (and most of the wider neurosurgical community in Australia and New Zealand).

In the end, this issue may be decided by a political arm wrestle between two competing value systems.

There is a real danger that because the neurosurgeons control the technical information and are "experts" their view will prevail.

The real issues here are far less technical than philosophical.

It is vital, therefore, that the community is well-informed and feels empowered to take full part in the political debate that is unfolding.

This is not a new issue, and the threat to neurosurgical services in Dunedin has always been there.

It comes to the surface every so often, when the opportunity presents itself for those who promote centralisation, not only of neurosurgery, but of all so-called "tertiary" hospital services.

A good understanding of this requires an understanding of the historical background of neurosurgery in New Zealand, the nature and control of surgical training, trends in surgical specialisation, the political landscape in health and an accurate appreciation of the realities of provision of emergency care and transport.

Historical background
The strength of the educational institutions and the hospital services in Otago have their roots in the prosperity of the gold rush of the 1860s, when Dunedin was, for a short time, New Zealand's largest city, and in the strong principles of the Scottish settlers.

The establishment in Dunedin of New Zealand's first medical school in 1874 and the strong link with a growing public hospital created an environment which soon established a proud medical tradition.

In 1943, Murray Falconer returned from Oxford to establish in Dunedin the first neurosurgical unit in New Zealand.

The Auckland unit was established in 1945, followed by Wellington in 1965 and the Christchurch unit not until 1981.

Most recently a fifth has opened at Waikato Hospital.

Part of the reason Christchurch has lagged behind in the development of many specialist hospital services, and not just neurosurgery, lies in the social fabric of Christchurch and Canterbury.

Unlike Dunedin, with its Scottish traditions which placed high public value on education at all levels, but particularly tertiary, combined with a strong ethos of provision of public health care to all, Christchurch medical practice evolved with a much stronger focus in private practice, and no medical school.

Attendance at the public hospital by consultants was considered more of an act of charity than a primary occupation.

A major shift in this predominant view came only with the opening of the University of Otago's Christchurch Clinical School in 1973 and the influx of a significant number of staff with different values.

The consequent upgrading of facilities and services at Christchurch Hospital has been dramatic, but it still lags behind Dunedin in some services.

Without doubt this has led to significant jealousies, not only in Canterbury but also further north, and a long and sometimes unpleasant thread of "cutting Dunedin down to size" has run through the health services debates.

Political attitudes
Rather than celebrating the drive and initiative of southern pioneers in establishing new services, and seeking to replicate these elsewhere, the response by politicians and ministry bureaucrats (often encouraged by clinicians in other regions) has all too often been to try to reduce services in "over-serviced" Otago.

They point out that the southern region has historically received more money allocated to hospitals on a per capita basis.

While no reasonable person would argue against the equitable distribution of health care, there are some important caveats.

Firstly, funding needs to be targeted to the actual incidence of conditions (not average intervention rates, as conditions do not occur with equal frequency or severity in every region).

Secondly, the practical difficulties of providing access to a dispersed population need to be realistically funded.

Thirdly, there do need to be centres of excellence or initiative to promote research, new developments and techniques.

Fourthly, the complex interactions and interdependency of services and skills mean that no one service can be considered in isolation.

There is significant doubt that the population-based funding formula meets these caveats, or that the so-called "adjusters" are valid, but such complaints fall on deaf ears.

On top of this, politicians believe that so-called "tertiary" services are always high-tech and high cost, even when they are not, and I suspect the implicit assumption in Wellington is that retention of neurosurgery in Dunedin will be more costly.

They also tend to believe that economies of scale will inevitably result from centralisation.

This is often erroneous, particularly if all the costs to society are considered, including costs to patients and their families dislocated to a distant city, often for weeks or months.

A common political ploy is to decree that a service can only be in one South Island centre, thereby pitting neighbour against neighbour.

All too often politicians have prefaced any debate with "there is no more money" and then tossed a single bone in between the two dogs and sat back to watch them fight over it.

This has led to some bitter and protracted disputes, most notably over cardiothoracic surgery.

It is only in the past 10 years that common sense seems to have prevailed, with both centres offering a service and able to work together at last to provide both emergency and elective needs acceptably close to home.

Ironically, two observations can be made about the current wrangle.

The first is that neurosurgery is actually not a particularly high-cost endeavour.

Most neurosurgical operations probably cost less than a hip replacement.

The second is that the centralisation proposal for neurosurgery is likely to be much more expensive, not less.