Democrats have a chance to rise above, and reunite the US 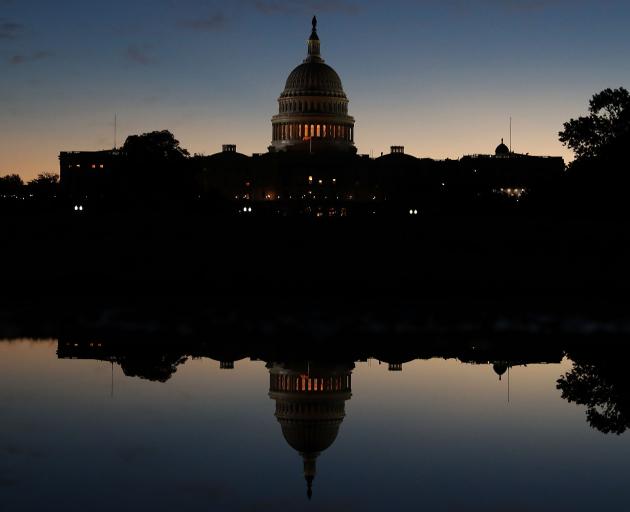 The US Capitol is reflected in a puddle of water a day after Americans voted in the midterm elections, on November 7, 2018 in Washington, DC. Democrats have won control of the House of Representatives while the U.S. Senate remains in Republican control. Photo: Getty Images
With the House in their pocket. Democrats need to ignore the Trump noise machine and get things done, writes Scott Martelle of the Los Angeles Times.

In the end, Wednesday's election results went about as expected, though not nearly as well for the Democrats as they had hoped. They took back control of the House by a slim margin and lost a couple more seats in the Senate. As waves go, it wasn't exactly good for surfing.

So what now? Well, the Democrats are in a position to effect change, but not necessarily in the manner they had hoped. With a split Congress, voters can expect little to get accomplished on significant issues. Immigration reform? Stalled. Repealing or adding tax cuts? Nothing doing. Changes to the Affordable Care? No prescriptions available.

So what can the House Democrats do now? Well, they can block whatever cockamamie ideas come out of the White House and President Trump's acolytes across the aisle, but even with the GOP in control of Congress very little was getting done. In short, a dysfunctional Congress in which the nation's business gets sidetracked by partisan intransigence will stay pretty much the same.

What the Democrats can do is hold hearings with some teeth, thanks to their newfound subpoena power. And if the Democrats decide to completely blow it - what are the odds? - they will embark on a whirling attack of investigations into all Trump transgressions.

They shouldn't. They need to separate dislike for inane White House policy positions from the true outrages and focus only on the things that matter. Rep. Adam Schiff (D-Burbank), if he becomes chair of the House Intelligence Committee (which seems probable), can and should revive the committee's investigation into Trump's dealings with Russia, an investigation that under Rep. Devin Nunes (R-Tulare) was more of a coverup than a check on the executive branch.

Anticipating tougher Congressional oversight, Trump took to Twitter yesterday morning to pre-emptively threaten the Democrats: ``If the Democrats think they are going to waste Taxpayer Money investigating us at the House level, then we will likewise be forced to consider investigating them for all of the leaks of Classified Information, and much else, at the Senate level. Two can play that game!''

The Democrats should shrug that off and call on the carpet top administration officials accused of misuse of tax dollars, hold oversight hearings on the dismantling of environmental regulations, and review the administration's actions in immigration enforcement, from maintaining the world's largest immigrant detention system (built under both parties) to apparent violations of migrants' right to seek asylum at the border. And the Republicans should join them in reasserting the separation of powers and providing true oversight of the executive branch.

What the Democrats should not do, though, is use their new power to harass the White House, or to pursue petty grievances against the administration.

The Democrats have no more credibility with the nation than do the Republicans. In this era of team politics, most voters have a low opinion of Congress no matter who controls it.

And Wednesday's results reinforced the reality we are a deeply divided electorate. As a society, we're in a dangerous place in which we can't even agree on facts, let alone truth. We have split, or let ourselves be manipulated into divisions, based on race and gender, economic status, faith and where we live.

This is where the Democrats can try to pull the nation back together by not overplaying their House victory. They are in a position to begin the long slow climb to a better political discourse. That isn't to say they should toss over principles. But they should recognise that they do not represent the entire nation, while they must govern as though they do. They should make their priority finding ways to work with Republicans to start actually governing.

This is their opportunity to be the adults in Washington. They should take it. Otherwise they will be complicit in the continuing death spiral of American democracy.