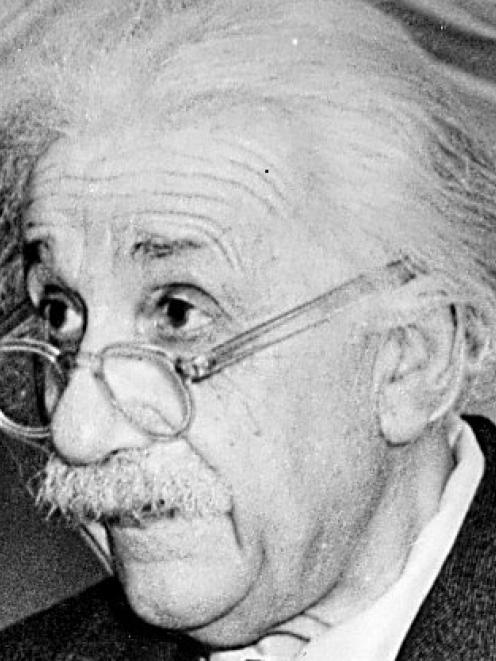 ''Two Jews, three opinions,'' a Jew once said to me, and they certainly come across as a disputatious lot - which is part of their vitality and strength. So it is good to find two prominent Jews sharing just one opinion on the way religion and science neatly complement each other.

One is the great Albert Einstein, whose theories on the relationship of matter and energy, space and time revolutionised Newtonian physics.

Though far from an orthodox believer, he knew enough to recognise that science and religion both have a valid place in human experience and understanding. That marks him off from today's dogmatic ''new atheists'' who would wipe religion off the planet.

Einstein said the scientific method taught how facts are related to and conditioned by each other, ''and can teach us nothing else''.

Pursuit of that knowledge was heroic - though also limited, for ''one can have the clearest and most complete knowledge of what is, yet not be able to deduce from that what should be our human aspirations''.

Religion traditionally filled that role, and Einstein found the highest principles for our aspirations and judgements expressed clearly within the Jewish-Christian tradition.

For him, however, those values did not originate in a supernatural God, but reflected the human side of religion - and they act on the conduct, aspirations and judgements of individuals as something living.

At their highest they are directed towards the free and responsible development of the individual, encouraging them to ''place their powers freely and gladly in the service of all mankind''.

Hence his oft-quoted aphorism: ''Science without religion is lame, religion without science is blind.''

Einstein's own religiosity was cosmic, arising, he said, from an ''unbounded admiration for the structure of the world'' and ''profound reverence for the rationality made manifest in existence''.

Enter the other Jew, England's Chief Rabbi Lord Jonathan Sacks. As a theist, his views on God obviously differ fundamentally from Einstein's, but he, too, believes any conflict between religion and science is misconceived.

His latest book, The Great Partnership, argues that science and religion should be seen as complementary, not hostile.

''Science,'' he says, ''takes things apart to see how they work. Religion puts things together to see what they mean.''

The two are the yin and yang of experience, neither complete in itself but each requiring the other to form a human whole. And that is rooted in the functioning of the brain, structured to carry out two quite different activities.

One is to break things down into their component parts and show how they mesh and interact - the realm of science. The other is ''to join things together imaginatively so that they tell a story, and join people together so that they form relationships'' - where religion kicks in.

Brain research has shown that the first of those functions is predominantly a left-brain activity, the other predominantly right-brain. The left hemisphere tends to be linear, analytical and logical, the right integrative, holistic, stronger on empathy and emotion.

They are different modes of engagement with the world, and can be seen reflected broadly in Western rationality (left-brain) and Eastern mysticism (right-brain), male and female, the sciences and the humanities, nature and culture, making a case versus telling a story, ancient Greece and ancient Israel.

Both are needed, both are important, and things go awry when one intrudes on the domain of the other - as, for example, when scientists demand physical proof of God, or fundamentalist Christians insist that biblical stories of creation are science.

Citing Einstein's aphorism about science without religion and religion without science, Lord Sacks says: ''Science is about explanation. Religion is about meaning.

''Science analyses, religion integrates. Science breaks things down to their component parts. Religion binds people together in relationships of trust. Science tells us what is.

''Religion tells us what ought to be. Science describes. Religion beckons, summons, calls. Science sees objects.

''Religion speaks to us as subjects. Science practises detachment. Religion is the art of attachment, self to self, soul to soul. Science sees the underlying order of the physical world.

''Religion hears the music beneath the noise. Science is the conquest of ignorance. Religion is the redemption of solitude.''

In the early days of science, the two worked hand in hand. Religion is in urgent need of updating, so that can happen again.

Ian Harris is a journalist and commentator