Eateries are not what's needed 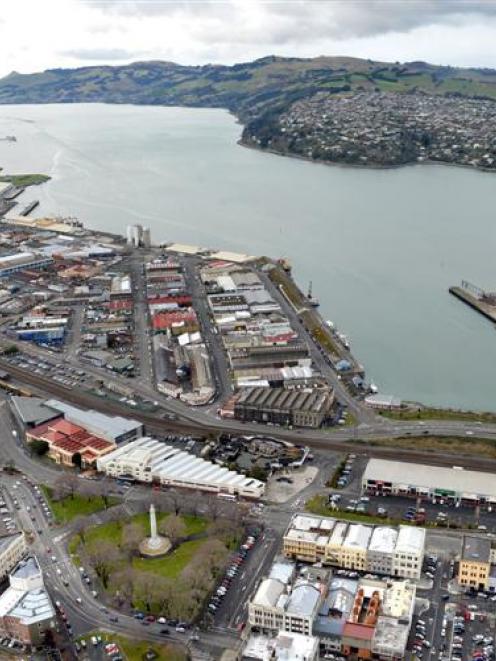 A view of the Dunedin Harbour Basin area and beyond. PHOTO: STEPHEN JAQUIERY
Dunedin resident Barry Simpson urges caution before proceeding with any harbourside project.

Thank heavens that the Otago Harbour Board assets were transferred to the Otago Regional Council.

The key point in Neville Peat's ODT piece (17.9.15) was at the end: ''It's time for the ORC to join hands with its indebted counterpart to enhance the Dunedin waterfront''.

Why should it, with Dunedin's recent history of investing in above-ground feel-good assets that have now mired the city in more debt than is wise?

The correct decision was made to vest Otago Harbour Board assets in the ORC as that allowed all of Otago, which had contributed to the board development over the preceding century, to share the benefit.

The local authorities of the day had been rated to assist the development of the board and they had political representation on it.

This has been realised with the provision of the cross wharf rebuilding here in Dunedin, the sponsorship of the rescue helicopter, the Millennium Track at Millers Flat to Beaumont and other track work spread across Otago.

That is, all have had a share, as it should be - not just one part of the board's constituency deriving benefit, as Mr Peat would have it.

Today our ORC rates are subsidised by the Port Of Otago's profit contribution to the ORC.

Long may that situation remain.

The possible reworking of the Harbour Basin demands robust debate and cautious costing.

In fact, I believe nothing should be done until the stadium debt is severely reduced.

The headland where the boat slip is is called '' Pleurisy Point'' by harbour workers for a very good reason.

The northeasters make this area most uncomfortable. T

he sea here is challenging when the wind is up. A strong motor is needed to work against the wind and tide.

If the University of Otago wishes to relocate the aquarium to this area, so be it; similarly with the ORC and its possible landbanked headquarters.

The underlying concept of being readily able to link citizens with the water is now met in good measure.

The Macandrew and Broad Bay reseeding of sand with the allied tree planting (pohutukawas) is an especial joy in the summer.

The recently augmented area at Vauxhall is linked to town by the cycleway.

We hope to see this cycle/walkway extended to Macandrew Bay and ultimately Portobello.

We now have a safe cycle/walkway to St Leonards and shortly this is to be extended to Port Chalmers.

The call for more eateries around the Harbour Basin implies a tunnel vision.

At present, there is Platos, the Wharf Hotel and the Customhouse Restaurant, with two lunch bars back from the water.

St Clair has a fine selection of stylish eateries.

The Octagon and George St near Knox Church are awash with eateries of all styles.

The establishment of additional food outlets on the harbour will compromise existing businesses.

The timber wharf hardly warrants refurbishment as it is in the shade until late afternoon.

Development here is not needed.

It is hoped the aquarium will be sited on the south side of the basin adjacent to the ORC land bank, which lies well to the sun.

The planning proposal from the DCC for this area has already cost us ratepayers $2.6 million. The lack of institutional knowledge was clearly demonstrated with this flawed concept.

We have an integrated and vibrant engineering cluster in this precinct.

Leave those businesses alone to get on with their core business rather than having to expend valuable dollars fighting a rearguard action to protect their patch.

We have tourism-related precincts adjacent to George and Princes Sts.

Let us maximise that ambience.

Our harbour is susceptible to the northeast and southwest winds due to its axis.

There are some sheltered areas along the harbour coastline that may still benefit from development.

The Harbour Basin is not one of these spots.

Calm days are rare. Let us have a cup of tea before we embark on more feel-good projects.

We really do need get debt reduction well under way first.

We are in the South where caution is the watchword.

The city council has done very well in recent times driving development of the likes of the stadium, the Wall Street mall, Toitu Otago Settlers Museum extensions, the Tahuna sewage works and related infrastructure and the St Clair seawall work.

The bills have to be paid one day. The council has given a commitment to do so and has embarked upon this work.

Let us get on with it and avoid being deviated down side tracks.