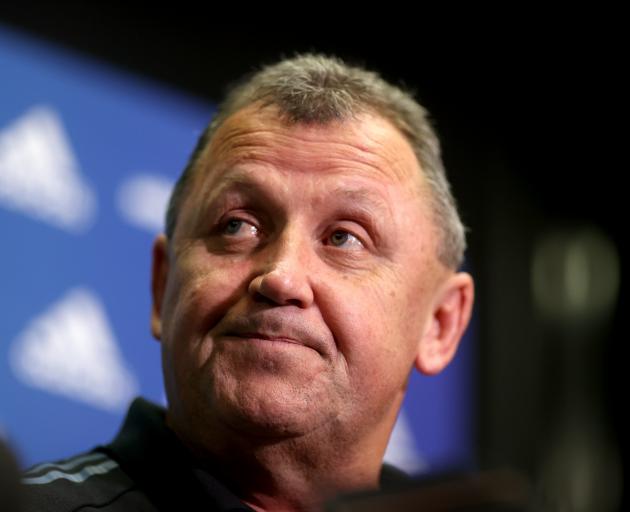 Ian Foster. PHOTO: GETTY IMAGES
If New Zealand Rugby wished for plenty of "engagement" with the public in the past few weeks it has certainly succeeded.

The Irish tour not only produced a tense contest, but the off-the-field drama and All Black failings have given rugby analysts lots to write about.

As the All Blacks head to take on South Africa in two tests on the high veld the storyline has another chapter to be written shortly.

There are not just the woes of the national team and questions about the coaches and the captain exercising angst, there are also the challenges of head knocks, the state of the game at lower levels and the frequent interruptions to what should be a flowing game.

The first half of the second test in Dunedin lasted 57 minutes with all the referrals and injuries. Add time around reset scrums and the amount of bashing up and it is no wonder many are lamenting. Penalty kicks to the corner and rolling mauls hardly showcase what can be an open running game.

The dynamic and dramatic State of Origin decider in Queensland was a salutary contrast.

In this winter of discontent — the Covid surge, weather woes, inflation and a divided society — rugby’s woes have proved a useful distraction. It’s a shame, though, that that news is also black or at least a dark grey.

It just shouldn’t happen. The northern hemisphere teams should not come to these shores in the middle of our season and prove substantially better.

The Irish should not be more organised and stronger at scrums, lineouts and breakdowns. The All Blacks should

not look like a collection of individuals and should never concede four well-constructed tries in the third test decider.

Ireland achieved its cohesion and success with a minority of the ball. The All Blacks’ defence of the rolling maul was embarrassing.

While the All Blacks might lack the stock of stellar players of the recent past and are weak at prop, they do have talent in most positions. Crucial, of course, is how they come together, how they are coached, how mentally attuned everyone is. After all, three players in the highly effective Irish backline were in fact New Zealanders who did not quite make the very top in this country.

The aftermath of the third test and last week’s conjecture and criticism kept the All Blacks in the headlines.

The cancelled media conference, speculation about under-siege coach Ian Foster and questions about his coaching team and the captain were all topics discussed and dissected.

New Zealand Rugby, which appointed Foster rather than the super-successful Scott Robertson, again showed its innate conservatism and its determination not to admit it was wrong. Two assistant coaches have been the only casualties.

Less than 14 months from the next World Cup All Black prospects have never looked so dire. The team has slipped to an unprecedented fourth in world rankings, and the three above are all on the All Blacks’ side of the draw. It has lost four of its last five tests, and prospects for South Africa are tough.

Still, as they say, the darkest hours precede dawn. There are, perversely, positives in the struggles.

There are all those for whom rugby is boorish, arrogant or irrelevant. They, at least, can enjoy a certain Schadenfreude, a pleasure in the woes.

There is potential for quite some redemption story. The All Blacks and Ian Foster could beat expectations, conquer the odds and start winning and maybe even, as an underdog, win the World Cup.

The tension of sport entails uncertainty. Easy and expected victories do not set pulses racing. All Black supporters can now relish wracked nerves.

The rugby world can also revel in a more even playing field, in more matches when the outcomes are more unpredictable.