It is not often that a New Zealand prime minister gets to tell a gathering of world leaders, face to face, just what they think.

It was an opportunity Jacinda Ardern, largely, did not waste when she received a few precious minutes to address the Nato summit in Spain in the early hours of Thursday New Zealand time.

The audience for her "intervention", to use summit parlance, included US President Joe Biden, British Prime Minister Boris Johnson and French President Emmanuel Macron, so this was a not inconsiderable moment.

Invited to speak briefly as the leader of one of four Asia-Pacific partners of the northern hemisphere alliance, Ms Ardern’s address covered an around-the-world list of concerns in her allotted minutes. 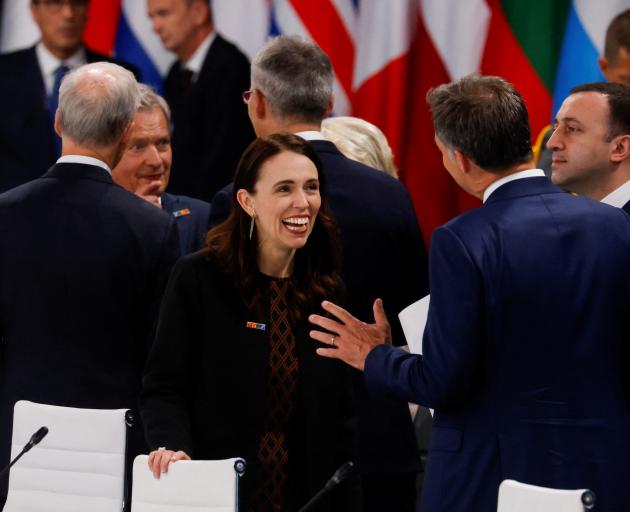 Jacinda Ardern at the Nato summit in Madrid. Photo: Reuters
First and foremost she tackled the predominant issue facing the summit, the Russian invasion of Ukraine, and made a welcome, unwavering statement of New Zealand’s commitment to continuing to support Ukraine. There will always be those to want New Zealand to do more and sooner, but there is only so much a small, independent country several thousand miles away can contribute.

Ms Ardern highlighted both the military and humanitarian aid New Zealand has contributed to Ukraine — more than $33 million so far, a figure which will almost certainly increase.

She also foreshadowed the announcement later in the day that this country had agreed to formally intervene as a third party in the case that Ukraine is taking to the International Court of Justice to legally challenge the Russian invasion.

Third party status allows a country which is not a party to the case to put its legal views before the court, something which will place New Zealand at the forefront of world opposition to Russia’s invasion — something which Ms Ardern correctly termed yesterday as an affront to us all.

New Zealand has only done this once before, in 2012 when Australia challenged Japanese whaling in southern waters.

That was an issue in which New Zealand was a close neighbour too: the Ukraine is far away, but Ms Ardern aligning New Zealand so strongly to the international chorus of disapproval is a deliberate stride on to the world stage. It does not come without risk: New Zealand’s major trading partner, China, has an active interest in this European conflict and there is the potential for some economic fallout.

That said, one of Ms Ardern’s priorities for this trip was to progress a free-trade agreement with the European Union, an organisation with a membership which largely duplicates that of Nato.

While a deal is unlikely to be sealed immediately, New Zealand’s forthrightness will have likely been approved of by those whose opinions count.

Ms Ardern’s passing reference to the People’s Republic noted China’s recent willingness to challenge international rules and norms and was followed immediately after by a generalised comment on the need to speak out on human rights abuses.

This intricate dance around the topic are familiar steps for all world leaders, who strive to leave Chinese political sensibilities unruffled while at the same time preserve existing economic arrangements.

Ms Ardern did get one more telling reference in to her speech, a condemnation of Pacific nuclear testing in a room with countries who carried out those tests.

While important for New Zealand, this is an even bigger issue for our Pacific neighbours and Ms Ardern will have hoped the island nations noted her comments.

While there was only so much that Ms Ardern could pack in to her intervention, an overt reference to the Christchurch call would have been welcome, although she might have felt her highlighting that even New Zealand had been targeted by Russian mis and disinformation on the internet sufficed to emphasise the perils still present on the world wide web.

But on the whole, Ms Ardern got New Zealand’s message across, in about as forceful a manner as the polite and delicately nuanced language of diplomacy allows.

The key now is how attentive and responsive her audience was.