Architectural features like cornices, soffits and finials tend not to figure prominently in good literature and in occasions of great family celebration.

But there are other building peculiarities which, though appearing at first glance to be rather humdrum and merely functional, have important roles to play.

Take balconies. Where would Shakespeare’s Romeo and Juliet be without the use of one in Act 2, Scene 2? The famous balcony truly played a blinder in that particular tragedy.

It’s the same with the balcony on the front of Buckingham Palace, looking across the Victoria Memorial and down The Mall to Admiralty Arch and Trafalgar Square beyond. Some of the most important moments in modern British and Commonwealth history have been marked by royal family gatherings, fairytale kisses and carefully dished-out hand-waving from this balcony, before everyone steps back inside for another gin and Dubonnet.

Not much really links these two examples of starring roles by a balcony in a drama, except they both have ended badly. That’s given the Queen’s move to chop orf a number of her family from the show-stopping synchronised balcony appearance, scheduled for after the Queen’s birthday parade and Trooping the Colour at the start of her Platinum Jubilee celebrations on June 2. 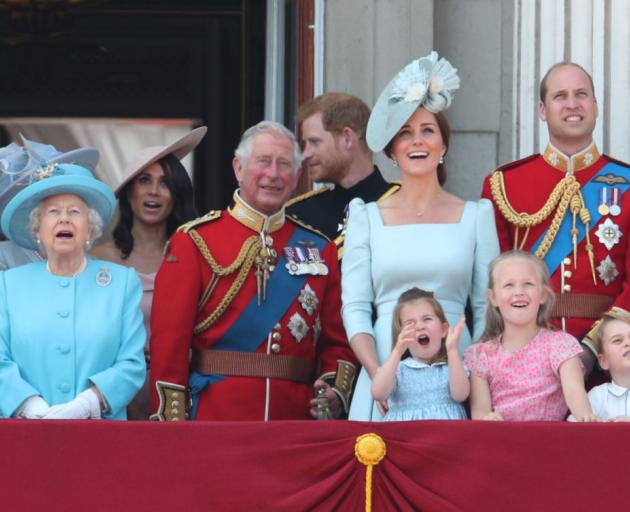 The Queen with members of the Royal Family on the balcony of Buckingham Palace. Photo: Getty Images
In a move which appears largely designed to keep the palace balcony free of the problematic - to put it lightly - and troublesome Prince Andrew and the irritating Sussexes, Prince Harry and Meghan Markle, the Queen has had to ban many others from the royal entourage to ensure consistency.

Her cull has made them the aristrocratic equivalent of collateral damage, with only those deemed as “working royals” allowed to step through the French windows and show themselves to the masses outside.

The upshot is that only 18 people will be on the balcony, with more than 30 left out, including some of the Queen’s favourite cousins, loved grandchildren and other well-regarded family members.

To us commoners, that certainly seems like enough royals to be going on with. The higher profile members of the balcony elite who most of us recognise and can name are clearly hard workers on behalf of the Queen, and it is said so are the less well-known of the chosen ones.

But it does make you wonder just how many there are in the British Royal Family and on “The Firm’s” payroll, with all the associates and affiliates, the lords and ladies, the people in waiting.

In our view, the Queen’s move was absolutely necessary. It was a good decision and long overdue. There is nothing stopping those excluded from the balcony from taking part in some of her other jubilee celebrations.

When it comes to the Sussexes particularly, it was a tour-de-force. The irksome couple from California do not deserve to be with those who have accepted their life of duty - albeit with all its incredible privileges too - and work hard to help others.

Recent reports that the Duchess of Sussex hated their 2018 tour of New Zealand and Australia, and struggled to understand what the point of it was and why people gathered to see them, will have done nothing to endear the couple to those Down Under.

Let us hope they are not too much of a wet blanket at the celebrations. If nothing else, it might provide the arrogant prince a few opportunities to re-check the Queen has the right people round her which, ironically, does not appear to include them.