Bright side of life 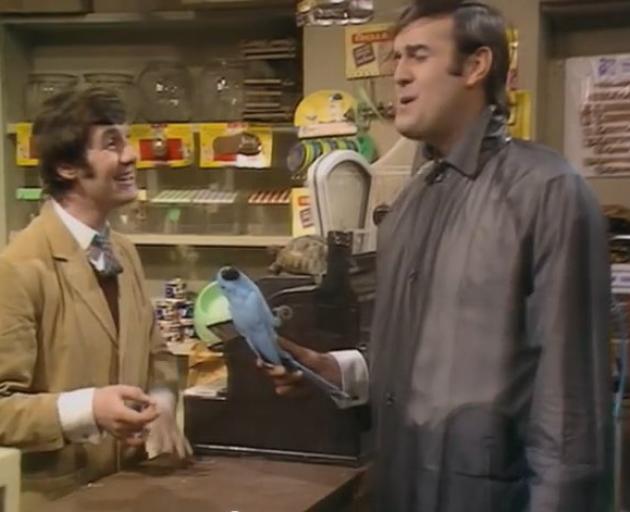 ‘‘’E’s not pinin’! ’E’s passed on! This parrot is no more!’’ Photo: ODT files
And now for something completely different.

Fifty years ago, shortly before 11pm local time, comedy struck the viewers of BBC Television in the United Kingdom, and the world of satire would never be the same again.

Six men - five of them Oxbridge-educated Britons, one an American with a talent for graphics - announced their arrival on Monty Python's Flying Circus, a surreal comedy programme that would not just poke fun at things but rip gaping holes in the conventions of society.

Forty-five episodes of the sketch show were followed by four movies and various other projects, the legacy of which perhaps reflects the status of the ''Pythons'' as the most influential collection of satirists in the history of the genre.

Half a century later, why should we still care about Cleese, Chapman, Palin, Idle and the two Terrys?

Because they set the tone for lots who came after, obviously. Rowan Atkinson, Fry and Laurie, French and Saunders, Harry Enfield, Ricky Gervais, The Simpsons, Saturday Night Live - the brain hurts if asked to list all the comedians and shows who followed in the silly-walking foosteps of the Pythons.

A lot of the comedy still stacks up, too. Not all of it, obviously, but you can't hear the Lumberjack Song and not chortle when the twist comes, and you can't not enjoy the Spanish Inquisition (''surprise and fear, fear and surprise), and you can't hear ''Venezuelan beaver cheese'' without smiling.

Mostly, the reason the Pythons resonate is because they didn't take themselves too seriously, that they remind us it is not only fine to be silly at times but it is almost mandatory if you want to enjoy life.

It's a frightening place out there, or it can seem like it. Life is hard. Work can drag us down. The world comes at us fast. Climate change and housing prices and nuclear weapons and Donald Trump and the economy and the pressures of social media - sometimes you just need a break.

Sometimes you just need to hear that Perkins had his leg bitten off - ''There's a lot of it about. Probably a virus. Keep warm, plenty of rest, and if you're playing any football, try and favour the other leg'' - or examine the question: ''Is there a life after death? Here to discuss it are three dead people.''

Spam, egg, sausage, and spam - ''that's not got much spam in it''. A dead parrot. Mr Creosote. The 127th Upperclass Twit of the Year competition.

Remind your cheeky son that ''he's not the Messiah - he's a very naughty boy.'' Chase the Holy Grail, whatever that may be for you. Seek the Meaning of Life.

Perhaps, above all, always look on the bright side of life.