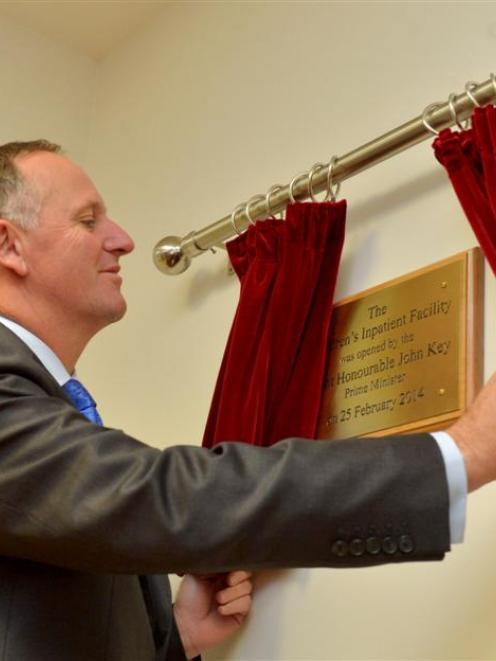 Prime Minister John Key unveils a plaque at the opening of the Dunedin Hospital's Children's Inpatient Facility yesterday morning. Photo by Gerard O'Brien.
A spectacular amount of positive news was generated this week and was heralded as a welcome boost to the Dunedin economy, which has struggled with continuing job losses and uncertainty in recent months.

In a timing coup, Prime Minister John Key was in Dunedin on Tuesday to hail Dunedin's Hospital's new $7 million neonatal intensive care unit and children's ward as world class, celebrate the opening of the $40 million upgrade of the Speight's Brewery, and to attend the opening of Dunedin Kindergartens' $1.4 million Forbury Rd site - on the same day as the University of Otago confirmed a major building plan.

The university proposes to spend more than $600 millon on infrastructure, a plan which has been called a major shot in the arm for the Dunedin construction industry as it will create hundreds of new jobs.

Dunedin has been at the back of the queue for major building work of late, with the Canterbury rebuild taking precedence in the past three years. Construction employers have held on to the hope their firms would provide some of the expertise in the multibillion-dollar earthquake rebuild to stop their staff leaving the city, leaving a skill gap which could take years to fill. The university's plans, revealed at a university council meeting, should go some way to easing concern - and a long way in providing skilled workers with a reason to stay in Dunedin.

The news last week of 100 workers having to move or face redundancy following the CRT-Farmlands merger was difficult to digest, given the uncertainty surrounding the future of such places as AgResearch's Invermay centre.

The good news this week may yet continue. On the same day as Mr Key visited, the university announced its plans and the brewery expansion was opened, the backers of Dunedin's $100 million waterfront hotel seemed hopeful of a way forward to get their project started.

In a move which will be welcomed in the business community, the Dunedin City Council is one of the local authorities which has signed up to ''Business Friendly Councils'' guidelines. The guidelines were produced by Local Government New Zealand in partnership with the Ministry of Business, Innovation and Employment and the core cities of Auckland, Hamilton, Tauranga, Wellington, Christchurch and Dunedin.

The guidelines cover issues such as ensuring council plans and regulations are coherent, ensuring staff understand the importance of economic growth to the local community and the impact of the costs of council processes.

The phrase ''red carpet, not red tape'' has been used in Dunedin, yet is one that appears to have had no major impact on the perception that the city council is one with which it is hard to do business. New chief executive Sue Bidrose is leading by example in addressing some of the major structural problems within the council, however, and deserves plaudits for her early efforts.

Importantly for this city, the brewery refurbishment was provided mainly by foreign investment, through Lion Brewery's Japanese parent company Kirin Holdings. Output at Speight's increased after the Christchurch brewery was damaged in the earthquakes. Company officials pointed out they had the choice of building a greenfields brewery (likely to have been near Christchurch, presumably) or refurbishing the Rattray St facility which first brewed beer in 1876.

Thankfully, they decided on Dunedin. As in other centres and for New Zealand as a whole, overseas investment is an important part of any growth picture.

Also this week, two Dunedin companies, Pacific Edge and TracMap, received Callaghan Innovation grants, which the Government uses to encourage further research and development by qualifying companies. Dunedin's NZX-listed Scott Technology, the recipient of earlier grants, is a global leader in the work it does with production systems.

Dunedin is an innovative city. Otago is an innovative region. Breaking down the barriers to economic success and job growth must extend across political and geographical boundaries. To succeed as a province, each part of the equation - from local and central government representatives through to individual companies and investors - must work together to ensure the good news stories of this week continue.