Give us some moa magic 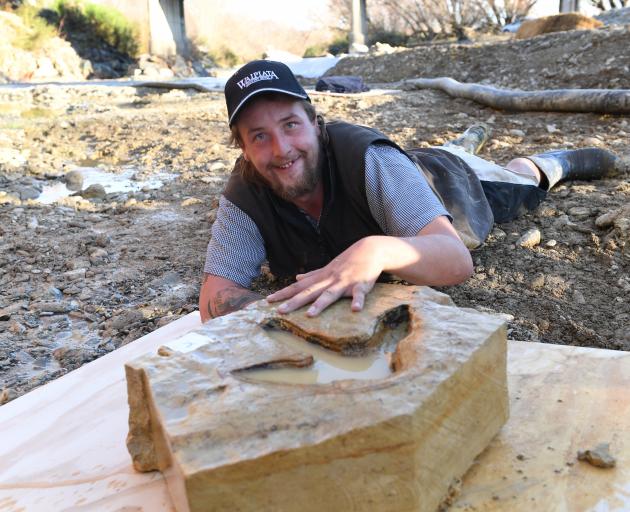 Michael Johnston with a moa footprint he discovered in the Kyeburn River after it had been recovered. PHOTO: STEPHEN JAQUIERY
Just a big bird. Just a few indentations at the bottom of a river. Just another reminder living things were roaming this green and pleasant land long before us.

And yet, all things considered, the discovery of seven moa prints on the bed of an Otago river that are probably millions of years old is not just another mildly interesting speck in the news landscape.

It is a fascinating development, a boon for scientists who are like giddy schoolchildren at the finding of the first moa prints in the South Island, and an intriguing thrill for the public, even for those of us who don't know our megalapteryx didinus from our dinornis novaezealandiae.

Why is it so exciting? What is it about a few three-toed prints in a clay bed - prints that come from one of the great dingbats of the animal world (maybe that's a little harsh but, come on, the moa is an ornithological oaf, in a gloriously geeky kind of way) - that makes this all such a buzz?

Partly, surely, it is the sheer quality of the prints. They have been preserved with remarkable clarity. They look almost too crisp and well-defined. You can almost SEE old mate moa squidging her way along the riverbed.

Perhaps it is the time-honoured ``buried treasure'' aspect of the discovery. From youngsters fossicking on the shore to detectorists sweeping their tools across the ground and straining to hear the pip-pip of discovery, humans love the idea of stumbling across something remarkable. This might not be gold doubloons or a sacred pa site, but it is something of tangible importance, if not monetary value.

It also makes us wonder: what else is out there? How many other rivers and lakes and hillsides and caves in the South are hiding such wonders?

There's a quintessentially Kiwi yarn at play here, too. A bloke from Ranfurly takes his dogs for a cool dip on a hot day and stumbles across one of the most significant finds in the history of New Zealand geology. Science in gumboots, brilliant.

Throw some coincidence into the mix. Scientists trade in facts but even moa expert Dr Mike Dickison acknowledged there was a remarkable slice of luck in the prints being found at all.

Mainly, though, the great Kyeburn River discovery of 2019 might have struck a chord because the moa, as much as or more than the kakapo and the kea and even the kiwi, is so very close to our hearts.

The giant, flightless bird represents something uniquely New Zealand. It lacks the majesty of the American bald eagle or the cockiness of the French rooster. But what it has, in spades, is character.

The moa is a big unit - like an avian Brodie Retallick. It's a bit gormless - apologies to the scientists who may inform us the moa was the Einstein of the large bird community. It might be kin to the ostrich and emu but it also has a distinct look and life story, and in the fact it was the only bird to have no wing bones, it has another huge point of difference.

When the last of the moa became extinct 500-600 years ago, thanks to a combination of habitat destruction and hunting, we lost a national treasure - something that could have rivalled the kiwi for our national symbol.

For now, we have to be content with these fabulous footprints, and a glimpse into our prehistoric past.

Say what you like. Given that avian are descended from dinosaurs, the moa was the only species that remotely resembled a dinosaur. Oh, stuff it.