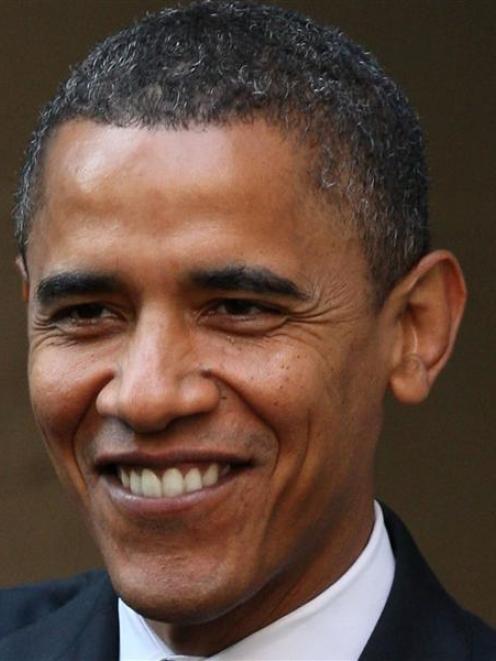 Barack Obama.
United States President Barack Obama's Budget proposals to trim future social security and Medicare benefits as part of a long-term deficit reduction compromise is likely to face attacks from both the right and left of the US political spectrum.

Overseas reports indicate liberal groups and some union activists are threatening to recruit candidates to challenge Democrats facing mid-term elections next year. At the same time, the head of the House Republicans' campaign committee signalled he would use Mr Obama's ''shocking attack on seniors'' against Democrats in general election races, despite Republican congressional leaders demanding the concessions from the president.

But for now, at least, the political warnings to Democrats are coming mostly from the left of their own party. They are being told they cannot be a good Democrat and cut social security. Some groups are calling for those Democrats siding with Mr Obama to be ''punished''. Liberal activists say that even if Democratic incumbents do not draw a primary challenger, they may face a shortage of volunteers motivated enough to do the hard work of campaigning, just as the Democrats did in the 2010 mid-terms which ended in big Republican gains.

Here in New Zealand, our Government has been actively working to reduce the number of people on benefits, encouraging them to find work - even if critics say there are no jobs available.

Social Development Minister Paula Bennett says there are 29,000 fewer New Zealanders receiving benefits since the last quarter, the lowest number at this time of the year since 2009. She ''takes her hat off'' to the more than 17,600 people who went off the unemployment, domestic purposes and sickness benefits and into work in the last quarter.

And the Ministry of Social Development cancelled 525 benefits in the last quarter after it implemented an improved information sharing arrangement with Inland Revenue. According to Associate Social Development Minister Chester Borrows, those who had their benefits cancelled are part of a larger group of 3500 people apparently working and earning above the threshold for welfare support, and the ministry is in the process of contacting them.

With expanded information sharing possible now, major savings are being achieved. Those 525 people were receiving benefits costing $5.6 million a year. That is money they were not entitled to, and Mr Borrows is glad it has been stopped. Confirmed cases are now being processed by the ministry to establish how much money has been overpaid so it can take action to recover it.

Even so, there are still 310,146 people on benefits, including 92,550 sole parents on the domestic purposes benefit, 58,208 on sickness benefits and 48,756 on unemployment benefits. And social welfare remains the largest expenditure item on the Government's balance sheet.

In the next three months, Work and Income staff will be trained on new welfare reforms. New Zealanders have a ''fair go'' attitude and the reduction of benefit fraud will be welcome in many quarters. The loudest complaints are coming from New Zealand liberal groups saying beneficiaries will become ''cannon fodder'' for politicians.

In the US, it seems taxpayers have failed to grasp the seriousness of their situation. The country has a huge balance of payments deficit, most of it owed to China. The cost of the War on Terror has been enormous in human and financial terms; job numbers and growth remain stalled.

Liberals have found much to praise in Mr Obama's Budget, including proposed new spending for road construction, nationwide pre-kindergarten education and advanced manufacturing research, along with the already announced higher federal minimum wage and reduced tax breaks for the wealthy. But they are shocked at a proposed new cost-of-living formula that will change social security and Medicare - benefits enjoyed by the US middle class.

New Zealand has grasped the seriousness of a growing welfare class, and is mostly composed about changes being made to encourage a hand-up, not a hand-out, but America is a long way from that debate. With the US still living well beyond its means, a reversal to the global economic slow down looks even further away.