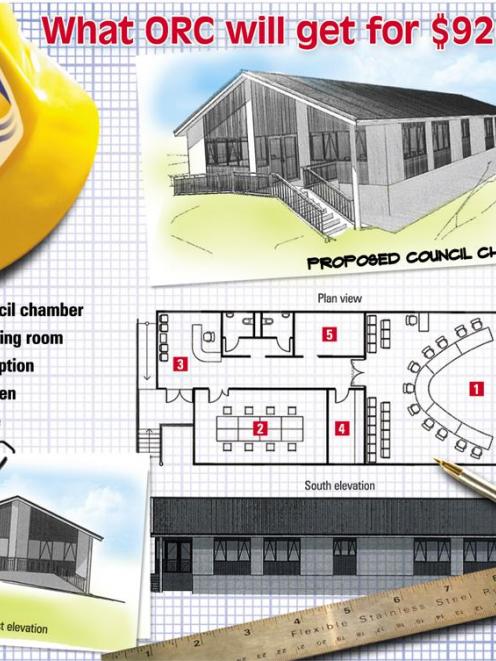 Many people will shake their heads in disquiet about the Otago Regional Council's decision to spend nearly $1 million building a temporary council chamber in its Stafford St car park. Perhaps the councillors and chief executive know something we do not, but it seems poor use of precious ratepayer money when the primary reason appears to be convenience.

The council building in Stafford St has been inadequate, and the councillors gave up their chambers for additional office space this year. That forced, from May, a relocation down the hill to the Salvation Army premises in Princes St for monthly council meetings. Of course, that is far from ideal. There is time and money in setting up and closing-down, interaction between staff and councillors is reduced, there is more waiting time for staff and council resources, and staff are not so easily accessed when required.

Nevertheless, $926,000, the estimated cost of the temporary building, is a hefty price to pay for what is - when all is said and done - largely convenience.

Additional staff time, especially at the most senior levels, is money, of course, but $926,000 (plus extra heating, cleaning, insurance, depreciation and other running costs) would pay for an awful lot of time. The capital figure alone amounts to $507 a day for every day of the year for five years. Use, meanwhile, will be for staff, council and committee meetings and hearings, and for civil defence.

The plans show a council room, a meeting room, a kitchen, toilets, reception and a store, basically the area of a house. These days there are requirements for the likes of disabled access, fire doors and data cabling as well.

The council, by law, does have a co-ordinating role should a civil defence emergency spread across districts in Otago. But such situations are rare, and the main responses - and the focus - is via territorial authorities. If required, the regional council could - as it would in an emergency today - surely have kicked out the occupants of its former council room for a temporary headquarters.

If the council was in private enterprise, struggling to make profits, would it spend money in this manner?

Yet, with the chief executive recommending it, the councillors - bar one - at the meeting this week agreed on the spending. Might this in part reflect the tendency of councillors to develop an inflated view of their own status and requirements, a position arguably manifest in the grandiose $30 million-plus plans for a new harbourside headquarters of five years ago.

It is as if councillors - and national politicians and others are the same - feed off each other and their staff in a bubble insulated from the everyday world. Councillors perhaps convinced each other the benefits of the new building would be "enormous", as chairman Stephen Woodhead put it.

Those with longer memories might remember one of the worst local examples of this type of thinking at the Green Island Borough Council. That council built a civic centre complex in 1983 (as it happened, just six years before the council was disestablished). The buildings were one of the reasons the council was in debt and facing parlous commitments, although it was the sewerage scheme and outfall that would be a far bigger burden. The ratepayers of the area, although this might never be fully admitted, were fortunate to be absorbed into the greater Dunedin City Council, later having the outfall costs shared more widely.

It is always important that councillors remember they are serving ratepayers and residents of the region, and that they should do so with a minimum of fuss or ostentation. At the same time, it should be acknowledged that, although there are calls for the council to be disestablished or merged into unitary authorities, it does have significant roles.

Voters expect regional councillors and staff to have the resources and facilities to do their jobs effectively. But they also believe in care and prudence with the spending of their money.