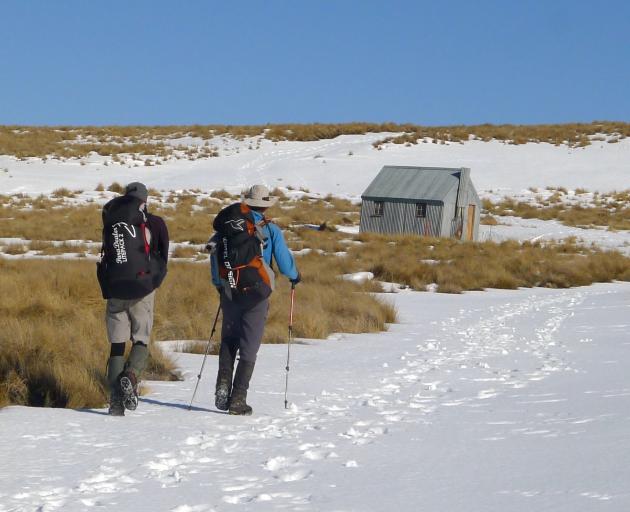 Two trampers make their way towards Wire Yards Hut in the Hawkdun Range, Central Otago. Photo: Philip Somerville.
Them thar hills appear to be winning a bigger place in the hearts of New Zealanders.

Many thought that the absence, largely, of overseas visitors would mean our tramps, tracks and trails would be much, much quieter.

And it is true that tens of thousands of young and not-so-young Germans, Americans and others from far-flung places have not been exploring our backcountry and byways.

New Zealanders on the Te Araroa Trail down the length of the country, on the Great Walks and in other places used to feel like a minority in their own land.

Before Covid, 75% of those on the Te Araroa were internationals, most aged 18 to 25.

Not anymore. A thick sprinkling of backpackers has hung around in New Zealand and taken their chances to populate the outdoors. But New
Zealanders are out there in
increasing numbers.

The most sought-after Great Walks, like the Milford and Routeburn, sold out their summer seasons just about as fast as usual. Even the overwalked and overpopulated Tongariro Crossing has been busy, although nothing like as in the past few summers.

One clear reason for more New Zealanders getting out and about is because overseas travel is blocked. If you are not on your OE or visiting Australia or Southeast Asia, then tramping becomes an alternative.

Covid provided another rationale. We were all, this time last year, confined to, or close to, barracks in the sustained Level 4 lockdown.

A breaking free, a spreading of the wings was to be expected in its aftermath.

The lockdown also provided a chance for people to exercise and walk in and about their neighbourhoods.

Also, the streets were so quiet that people were able to feel more in tune with nature. Birdsong was more noticeable, and in the balmy autumn it seemed the outdoors was in tune.

At the same time, awareness of the environment, including climate change, is helping us appreciate what we have.

Among those out and about on the main tracks, anecdotally at least, are many younger women. It is becoming a trendy thing to do.

Tramping websites are popular and outdoor shops have been doing well, providing for the range of adventure and information for the many newbies.

Other outdoor activities are thriving. Sales of boats are well up and bike riding continues to thrive, including the growing sport of bike packing as an offshoot of mountain biking. It is said a new section of off-road cycleway is opened every month in New Zealand.

Off low bases, the likes of pack rafting flourishes among the more adventurous.

These are all to be celebrated as active and healthy pastimes, transporting people physically and mentally from their work and their cities to enjoy the bewildering beauty and variety this country has to offer.

The opening of the borders, when it finally happens, will do little to dampen the growing enthusiasm for New Zealand’s outdoors.