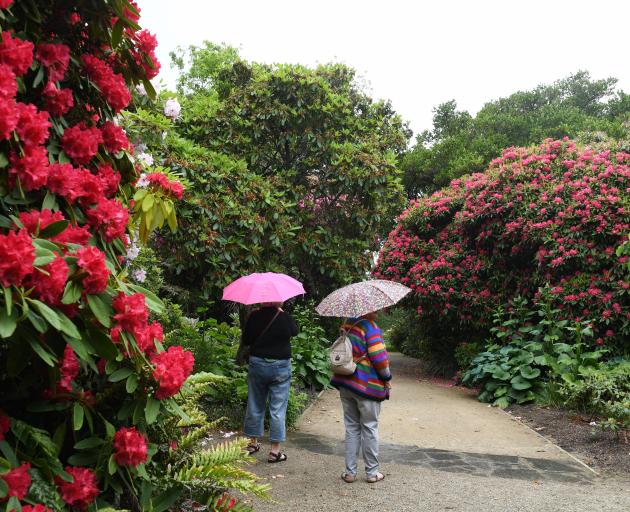 Rising up hills on most sides, and running down to the harbour and the South Pacific Ocean on the other, the city has an almost unending number of different vistas around every corner that are a sight for sore eyes.

Above the heart of the city lies the Town Belt, a stolidly reassuring ribbon of native and exotic bush which adds a cool green haze even on the warmest summer days.

Look closer at this time of year around Dunedin, though, and the fresh vibrant greens of spring are punctuated by patches of bright pastel colours, where the blooming rhododendrons force their way through less vivid bushes.

This weekend marks the 50th anniversary of the annual Dunedin rhododendron celebrations.

And vice-versa, of course. The city’s cool, temperate climate, regular rainfall, and shady nooks and crannies form their perfect environment, conditions not too different from the parts of the Himalayas where they thrive.

It is not unusual to find early- flowering rhodies in Dunedin in August, heralding several months of display which peaks now and finally fades out not too many weeks shy of Christmas.

Unfortunately this year, particularly as it is such an eminent anniversary, revelries have been somewhat muted.

The plants may still be flowering in force, but Covid-19 has put a crimp in part of the celebrations, as it also continues to disrupt all kinds of events and activities around the country.

The organisers of the event, the Friends of the Dunedin Botanic Garden, have had to cancel tomorrow’s annual and very popular plant sale to meet Alert Level 2 requirements, although some tours and talks have still taken place, as did Thursday evening’s Les Cleveland CocktailEvening.

Dunedin is extremely fortunate in having a range of attractions to draw all kinds of people.

First and foremost it is recognised around the world for its heritage and for its wildlife. It is also a thriving city of the arts and literature, which has wonderful museums, cafes and restaurants, sporting events and musical extravaganzas.

It would be fair to say our rhododendrons and the annual celebrations are not quite in the same league when it comes to attracting visitors.

Yet they are more than just a  niche attraction, and it is worth remembering the Botanic Garden’s more than six-hectare dell is one of the world’s most significant, with more than 3500 rhododendrons from 178 species and with more than 200 named hybrids.

So what have 50 years of rhododendron festivals done for Dunedin? You could just as well ask, ‘‘what is art?’’.

Something doesn’t always have to be of huge commercial benefit to be successful or worth doing.

Let us hope, like the plants themselves, the rhodie lovers and their celebrations will continue to brighten Dunedin for many years to come.

Personally I consider rhododendrons a pest with little ecological value. "The pollen and nectar of some species of rhododendron are toxic to animals, including nectar eating birds. Honey made from these flowers can be toxic to us, although the levels are usually too low to be a problem. ... The result can be death, but the birds can generally recover if they get help quickly enough".

Dunedin has an amazing flower show. The council should be doing more to promote mid week excursions for people from other cities.
Maybe Lee Vandervis could lead this and attempt something positive for Dunedin for a change.