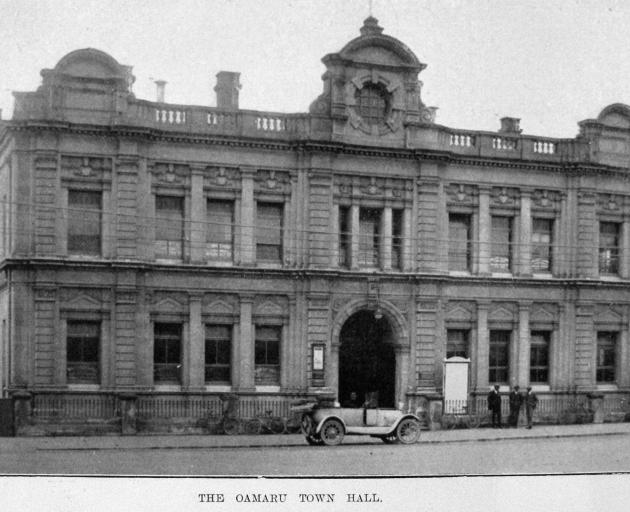 Oamaru Town Hall. — Otago Witness, 16.11.1920. COPIES OF PICTURE AVAILABLE FROM ODT FRONT OFFICE, LOWER STUART ST, OR WWW.OTAGOIMAGES.CO.NZ
Today at Geneva one of the most historic and important gatherings of representatives of Great Powers in the history of the world will be inaugurated. The object is to constitute the Assembly of the League of Nations. It is well to remember that the League has not yet been fully constituted, beyond the establishment of the Secretariat and certain meetings of the Council. The Assembly will be the paramount arm — indeed, the League’s existence is illusory until it is established. So far, then, the League of Nations is little more than an idea, but the inspiration of that idea has stimulated some of the biggest minds of the century. It is undeniable, however, that the full triumph of the ideal of the League of Nations will mean great and fundamental changes in world politics.

The monthly meeting of the United Band of Hope, North-east Valley, was held in the Institute, the president (Rev R.E. Fordyce) presiding. An excellent programme was provided by members of the combined churches and Salvation Army.

The Rev N.A. Friberg, in addressing the meeting, warned the young people of the evils of strong drink. He stated that for centuries past men had tried in many ways to control this evil and had failed. An evil that was dangerous must be put out of the way altogether.

Mr Friberg concluded by impressing on the children never to forget the lessons they had learned at the Band of Hope.

Mr Arthur Pittaway, station master at Alexandra for the past three years, left for Dunedin this week to take over a position in the District Traffic Manager’s office. Prior to his departure he was the recipient of farewell gifts from the Bowling Club, of which he was president, and also received a combined gift of a wallet filled with a roll of notes from the fruitgrowers, business people and other citizens. All spoke very highly of the departing guest. The fruit growers expressed keen regret at his removal, as his control of the local rail facilities for the fruit had been exceptionally good, even during the rush of the hot fruit season.

In a reference the other day to seaside planting (says the Dominion) the director of reserves at Wellington (Mr J.E. McKenzie) said that his experience has been a very good guide as to what form of native flora flourished best along the seafront. All round the coasts and on the nearby islands natives such as pohutukawa, broadleaf, karaka, southern rata, and many of the veronicas, olearias, taupata, coprosma and pittosporum grew naturally in the most exposed and windswept places. If a shelter of any of these was planted to protect the garden, the number of plants that could be grown within quite a short distance of the sea was remarkable.

Tired of being ribbed

An unusual application was made in the Chicago Circuit Court when Peter Hell, of Chicago, applied on behalf of himself and his two sons for authorisation to change their name to Hall. It is stated that Hell had become tired of the many very obvious jokes made at the expense of his surname. He formerly had a saloon bar, and he says it became a common expression for his patrons to say, “Let’s go to Hell for a drink.”

Even these ones, the innocents of the Band of Hope, are tarred with the epithet Wowser.

What is a Wowser, really?
A killer of joy! The Wowser does not want happy families. Oh No. The Wowser libater wants to spread misery with spirituous intoxicants! His name is.. Ernest Booze! Effin purveyor!!

Now, we will sing "Please, daddy, don't get drunk this Christmas'.

The League of Nations was an ideology which became a transnational bureaucracy, a vehicle of horror.

Solzhenitsyn later wrote in his Gulag:

“Thanks to ideology, the twentieth century was fated to experience evildoing on a scale calculated in the millions. This cannot be denied, nor passed over, nor suppressed."