No easy choice for voters 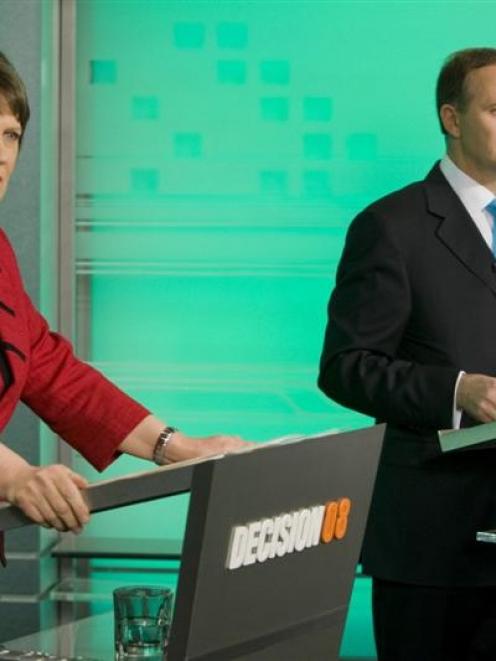 This election campaign has been defined by the dominant attention given to the leaders of the two main parties, and by the very blandness of the programmes both are offering voters tomorrow.

There has not within living memory been a campaign where, halfway through, the party seeking re-election has decided, because of the uncertain economic future due to the global crisis, not to announce any significant new spending policies.

Nor, surely, can there have been an Opposition party seeking to be the government which has adopted so many of the Government's policies.

The tag "Labour lite" was attached to the National Party under John Key's leadership some months ago and the party has found it difficult to shake it off.

Like most labels, though, it is only partly true. There is a sufficient degree of difference between the two centrist parties to provide voters with a genuine choice.

Much of this, however, may turn on perceptions of leadership rather than policy.

Helen Clark has successfully led Labour coalitions for three terms and her managerial skills working with all the stresses and compromises of MMP politics are now unquestionable.

She, and Labour, have relied during the campaign on this record and it is one in which she can take considerable pride. But it tells only half the story, at best.

In 1999, she set out with a team of largely indifferent talents to rebuild social equity following 15 years of divisive market reforms, and she can claim to have achieved a great deal towards this goal.

There have been policy failures and inadequacies, but in the narrow terms of her personal social democrat philosophy the successes outweigh them.

Yet the fiscal cost has been enormous over nine years and is reflected today in the appalling state of the Government accounts.

Yet it is not extraordinary at all that during an artificially prosperous but debt-funded decade, Labour's policies have resulted in the shortcomings now so patently exposed.

The economy is out of kilter just at the point where stability and progress are crucial.

National, while proposing to continue many of the social policies as well as improve Labour's tax cuts, reckons it has the solution to this quandary, built particularly on two headings: the promotion of public/private spending on capital works, and strategies to loosen perceived impediments to productive growth.

The first can be regarded as essential and overdue.

The second may be regarded as threatening, particularly here in the South where the preservation of the environment against rapacious exploitation for progress and the enrichment of the North, has long been a concern.

The principal obstruction National sees is the Resource Management Act, which it plans to revise to make certain projects considered of importance able to speed more readily through the consenting process.

If the revision confines public participation to a marginal role, then in our view it cannot be supported.

Environmental preservation and protection must not be abandoned merely because the terms of trade happen to be temporarily against us.

The collective choice voters make tomorrow is not for a government, although everyone's votes will help determine its shape, but for a Parliament.

In this regard, voters have since 1996 rejected the two-party House in favour of a far more representative assembly.

And by the weight they have given to certain party choices, coalition government has been their preferred form, without knowing on election night precisely what form that government would take.

There is also a pronounced difference between the policies Labour and National avow which may be described as voter-responsive, and those of some of the better-supported minor parties which are far more ideologically-based.

This has meant, under MMP, that governments have been formed which reflect voter expectations rather than voter adherence to dogma - a far healthier prospect.

It is easy to assume that at this time in our history these expectations will be wholly related to income, but we have greater faith in the shared sense of the electorate to look for a higher purpose.

The government to emerge from tomorrow's poll must be capable of managing the nation's affairs in hard times, principled enough to make unpopular but necessary decisions for the long-term future of the nation and not the short-term ambition of staying in power, and capable of converting our dependency economy into more productive purposes - without destroying the state's safety-nets or driving overseas our human capital.

The choice is one voters will wrestle with, for Labour has failed to balance its social equity gains with the crucial need to advance the export-led growth economy, upon which we all in the end rely; and National, while promising far better economic performance, has listed too many "me too" policies to make that claim barely credible.

New Zealand, as a food exporter, is well placed to survive and even make great gains from the coming world recession, but it will need an outstanding government team led by an outstanding prime minister to meet the challenge.

Such a government will not eventuate if voters look for change merely for the sake of change; it will come about when the shadow of first-past-the-post is cast aside and the opportunities that arise from MMP are fully realised.

We all have two votes: use them shrewdly.