No 'get out of jail free' card yet 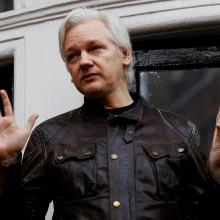 The WikiLeaks founder made a brief balcony appearance at the Ecuadorian embassy in London at the weekend, after Swedish authorities dropped a long-standing rape investigation into him (a sexual assault allegation was dropped in 2015 after the statute of limitations expired).

With raised fist, Mr Assange said the announcement was a victory for him and for the United Nations ``human rights system'', but warned the ``proper war is just commencing'' as UK and US authorities were still threatening him with arrest. He said he would not forgive or forget what he called ``seven years of detention without charge: in prison, under house arrest and five years in the embassy without sunlight'' which meant his children had to grow up without him. He then struck a conciliatory note, saying he would be ``happy to engage in dialogue'' with American authorities.

In 2010 WikiLeaks published hundreds of thousands of secret United States diplomatic cables, embarrassing and angering the US Government and its allies, including New Zealand. The secret documents were provided by (then) Private Bradley Manning, who served seven years in prison for the offence before the sentence was commuted by outgoing president Barack Obama. (The young intelligence analyst began gender reassignment while in prison and became known as Chelsea Manning.)

Also in 2010, Mr Assange was accused of rape and sexual assault by two female former WikiLeaks volunteers in Sweden. Warrants for his arrest were issued and he surrendered himself to UK police in December, was held in solitary confinement, then released on bail. He lost an appeal to the UK's Supreme Court against extradition to Sweden. Fearing Swedish authorities would hand him over to the US to face criminal charges, in 2012 he took refuge in the embassy of Ecuador, in London, which granted him asylum. He has remained there since, unable to leave as he is likely to be arrested for breaching his bail conditions.

Many revere whistle-blowers such as Mr Assange. They support WikiLeaks' goals of freedom of speech to improve transparency and reduce corruption - the same goals espoused by media organisations worldwide. Opinions differ, however, on WikiLeaks' methods: a reliance on secret sources and leaked material, which governments have argued might put their countries and servicemen and women at risk.

This newspaper finds the most difficult thing to marry is Mr Assange's professional crusade for transparency with his refusal to be held to account personally. The allegations are of a serious criminal nature. He maintains his sexual connection with the women was consensual. If he is innocent (and everyone should be assumed innocent until proven guilty) he had nothing to fear from simple questioning. If he was charged as a result, a trial in Sweden would surely have been fair and transparent and in the media spotlight.

When it comes to the ``human rights'' quoted by Mr Assange, there are still two women whose rights have been denied. This self-professed defender of truth and justice has sent a disturbing message to rape victims and perpetrators of sexual violence: run away and you won't be held to account.

Swedish authorities say they have exhausted the possibilities for investigation and legally the inquiry must be closed, but they will consider reopening it if Mr Assange returns to Sweden before the statute of limitations ends in 2020. He seems unlikely to do that, but it is unclear what his next move will be.

While he argues he has been unfairly detained, and his children deprived of a father, he could, in fact, leave the embassy at any time and start facing reality. The two former WikiLeaks volunteers had to, as did the supplier of his organisation's best cache of information.