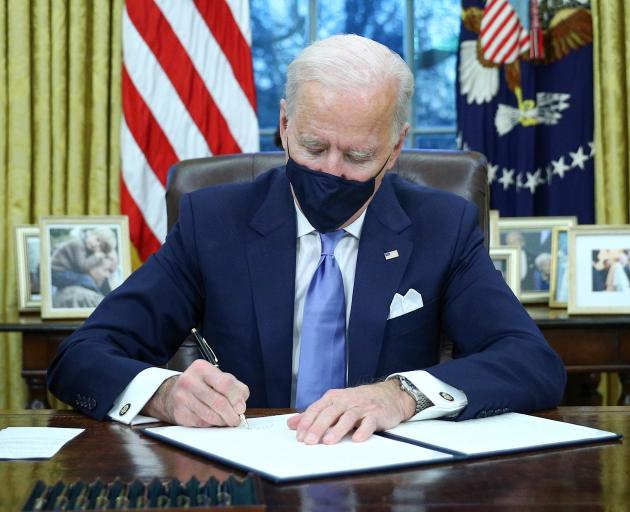 New US President Joe Biden signs executive orders in the Oval Office of the White House after his inauguration yesterday. PHOTO: REUTERS
The nightmare is officially over. The appalling United States presidency of Donald Trump has finished. Joe Biden is in charge of the most powerful and most influential nation on earth.

What a challenge he faces in a nation ravaged by Covid, where tens of millions still — against all evidence — believe the election was stolen, and where divisions are chasmic.

Sometimes politicians, with a whiff of modesty, say they yearn to leave their country in a better state than when they began. Mr Trump, the “malignant narcissist” sans a single bone of modesty, departs with his country weaker economically, morally, culturally, in health, in spirit and with its institutions and norms having been hammered.

President Biden, and Vice-president Kamala Harris, inaugurated yesterday, face herculean tasks in righting the ship of state and giving the nation some sense of unity, togetherness and “civil” discourse.

Mr Biden was chosen as a moderate Democrat, as a positive and reassuring presence so that Mr Trump might be vanquished. That has been achieved, and Mr Biden is launching his presidency by taking decisive action on several fronts.

That is how it should be. Despite his middle-of-the road reputation, his administration has the chance to be bold by American standards. That is not, however, to expect the type of agenda that other Democrat candidates like Bernie Sanders and Nancy Pelosi would have promoted.

Like Jacinda Ardern as Prime Minister in New Zealand, boldness will be circumscribed by what middle America is able to accept. That is necessary for Mr Biden to endeavour to fulfil his promises of unity and so that changes can be widely accepted and stick.

This is especially so given the complexity of US governance — the Congress and the Senate, the power of the states, the delegation to local government and the position of the judiciary.

Although substantive change in a country and a system so complex is difficult to achieve, it has been possible in the past. This is where Mr Biden needs to be both ambitious and realistic. At the same time, the voters of the United States have also to be realistic when the new administration struggles with its goals.

The massive scope of the mess left behind will test Mr Biden, the Democrats and the country. Hopefully, hope and purpose will be laced with acceptance that Mr Biden will have his faults and his stumbles. Hopefully, Mr Biden’s honeymoon gloss will not fade as much as it has for the likes of Canada’s Justin Trudeau or France’s Emmanuel Macron.

Inauguration day, with its high-flying rhetoric and emotion, has passed without serious disturbances. For that, the United States and the world are hugely relieved.

New Zealand welcomes a president who will build up rather than attack the international institutions on which small countries depend. And all nations should welcome a president who uses proper diplomacy and co-operation ahead of bullying and blustering and erratic and impulsive decision-making.

Again, nevertheless, expectations should be tempered. The United States will continue to act in what it sees as its own self-interest and what its populace supports.

For now, though, let us celebrate Mr Biden’s inauguration, the end of four destructive, divisive years and revel in the optimism of a new dawn.

Unity is achieved through compromise. The fact that Joe Biden was signing pro abortion decrees within hours suggests he has no intention of looking for unity with conservatives.

Since kiwis love biden SO much maybe it's time to put New Zealand on the map as the 51 state.
Ardern could be the governor, an election could find 2 senators and 6 representatives. Why just be passive observers in american politics when we could be participants? I think it would be awesome! We wouldn't have to depend on all that free foreign aid we would get free federal handouts. New Zealand would be able to join the first world. It will be great! Wait, what? You don't want that? Why? You want to impose Biden on the US but don't want him here? I don't get it? Why the bizarre interest in american politics then? Something you know nothing about? Can you tell me how 80 million people voted for Biden but less than 1000 showed up for the innugaration? 300,000 watched on tv, yes; sounds like a man of the people! Amazing how with all the problems NZ has, the sheepeople are focused on american politics. Freud would say "politics envy". I'm sure if americans knew where NZ was and who Ardern was they would be equally interested in our politics. Thankfully, they just aren't that nosey or egocentric to think anybody would care what they had to say. Maybe we could learn something?

Mate, I know that's more sarcasm than anything but it's actually an outstanding idea. I would only fall into the 15% tax category based upon my income. Under the Biden plan, medical, dental, and eye care would be extended under the existing Obama care program. Universal health care with no wait. How nice would it be to get some of those COVID Biden Bucks? He's about to give another $2000 to all Americans. It's actually a pretty good idea. I'm for it!

Aside from the snarky tone, there actually are a lot of benefits to being part of the US. I don't know anything about the political end of it but I know financially we all would better off?