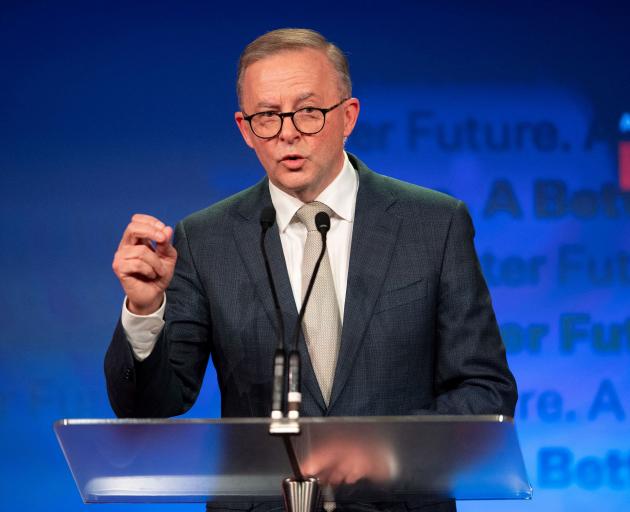 Anthony Albanese after winning the 2022 Australian general election. PHOTO: GETTY IMAGES
Australian voters have spoken. It is out with ScoMo and in with Albo. The Labor Party’s 59-year-old career politician Anthony Albanese will become Australia’s 31st prime minister after voters turned against the Liberal-led coalition at the weekend’s election.

After nearly four years in the top job, Scott Morrison, known for his gaffes and blunderbuss approach to many issues, gave a gracious concession speech, taking responsibility for the election defeat and signalling his decision to stand down as Liberal leader.

Late in the campaign, he suggested it might be time to change the way he did things, but also defended his bulldozer style he said had been necessary during the Covid-19 pandemic to get things done.

Mr Albanese, who makes much of his humble origins as the son of a solo mother surviving on a disability benefit in a state house, says he is more of a builder than a bulldozer and someone who favours collaboration.

Those collaborative skills could get a workout early in his prime ministerial career — to form the government, as the shape of the new government is not settled. Whether Labor could reach the 76 seats required for a majority in the House of Representatives or have to form a minority government was still in the lap of the vote counters at the weekend. It was sitting on 72 seats on election night, with the Coalition on 50.

Mr Albanese is an old hand at such negotiations. As Leader of the House in Julia Gillard’s 2010 minority government, he was instrumental in getting the ongoing support from independents.

The rise of the so-called women teal independent candidates, some with impressive Liberal family credentials, was a feature of an otherwise lacklustre campaign which concentrated on the two main leaders’ style rather than policy.

These candidates, standing in what were seen as safe Liberal seats, were pushing for climate change action, and implementing a federal integrity commission.

On election night it appeared four Liberal members of Parliament had lost their seats to such independents including the shock ousting of the Liberal Party’s deputy leader, treasurer Josh Frydenburg, who had been tipped to succeed Scott Morrison.

If Labor manages to scrape up a majority, the influence of this group of teal MPs and the Greens may be limited, but it would be foolish to ignore the mood of those who voted for these candidates.

The issue of climate change loomed large in polls of voter concerns, ahead of worries about the economy and cost of living, and it will be interesting to see if Labor will beef up its policies in this area.

Mr Albanese has said together the country can "end the climate wars". In his victory speech, he made the expected noises about wanting to bring the country together, "to promote unity and optimism, not fear and division" and kindness to those in need.

He also pledged to implement the Uluru Statement From The Heart which includes constitutional recognition for Indigenous Australians.

The defeat must be a wake-up call to the Liberal Party, particularly regarding its positions on climate change, the integrity commission, and its attitudes to issues important to women.

The impact the change of government may have on Australia/New Zealand relations is another unknown.

Some commentators have suggested there might be a softening of the contentious "501s" policy, deporting New Zealand citizens who have been sentenced to more than 12 months in prison in Australia, or convicted of child sex offences, or removed on "character" grounds. We would be surprised if there were an early or dramatic change to this.

This week Mr Albanese will have other international issues on his mind, as he hits the ground running, or flying, to attend the Quad summit in Tokyo where he will rub shoulders with leaders of the United States, Japan, and India.