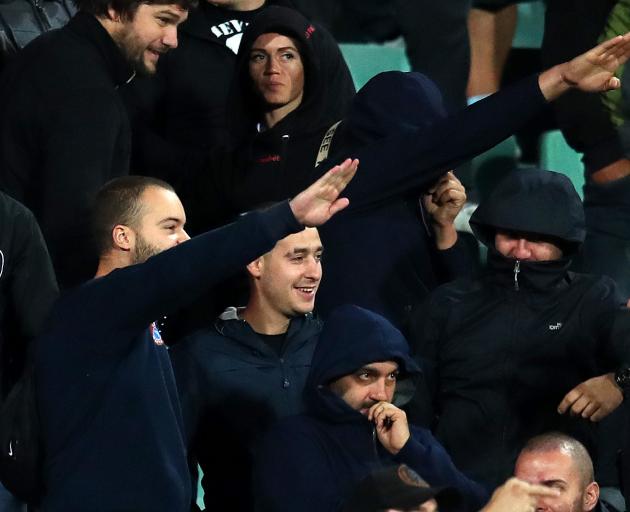 People in the crowd at the Bulgaria England game were seen pulling Nazi salutes and chanting racists epithets. Photo: Getty Images
Monkey chants, Nazi salutes, racist taunts - it was an appalling night for international football, and a reminder that sport is not immune to utter shame and vile behaviour.

The European Championship qualifier between England and Bulgaria in Sofia last week was marred by multiple instances of black English players being racially abused.

The game was twice stopped by officials, and there was even the extraordinary sight of Bulgarian captain Ivelin Popov spending much of halftime pleading with sections of the crowd to put a sock in it.

English players would have been well within their rights to walk off - many feel that is the only sort of action that will lead to racism being eradicated from football - but they decided to stay, to punish those mindless "fans" by delivering a hiding to the home team, and a 6-0 scoreline spoke volumes.

It should not, obviously, be on the players to solve this problem.

Tyrone Mings, the Aston Villa defender making his international debut, should have been revelling in the biggest night of his sporting career; instead, he was being abused for the colour of his skin.

The Bulgarian football president has since resigned, and there have been calls for Bulgaria to be booted from the competition. It is, therefore, some small consolation that the reaction to the disgrace has been swift.

Football and racism went hand in hand as recently as the 1980s, when players of colour in the English game were frequently pelted with banana skins and met with monkey chants.

Thankfully, the Premier League is now, if not a racism-free zone, a setting vastly more accepting of various skin colours, though clearly there are pockets of Europe where the stain still exists, perhaps reflecting the rise of populist right-wing political parties.

On this side of the world, sport has had the occasional brush with racism - most recently, when there were a series of incidents in Canterbury and West Coast club rugby - but it has not generally been a common enough occurrence to suggest a worrying trend.

Still, it happens, and there has even been some discussion during this Rugby World Cup about Pacific Island rugby players being treated more harshly by the (almost uniformly white) referees.

Is there indeed a subconscious racial bias? Is a brown-skinned rugby player's physical tackle judged more harshly than one from a white man?

They are uncomfortable questions to have to answer, but that discomfort is nothing compared to what subjects of racial abuse have to deal with.

It is distressing to realise in 2019, long after we hoped - perhaps idealistically - racism would be eradicated, the sort of rubbish witnessed in Bulgaria can still happen.

The group is the 'Lauta Army', a neo Nazi hooligan gang.